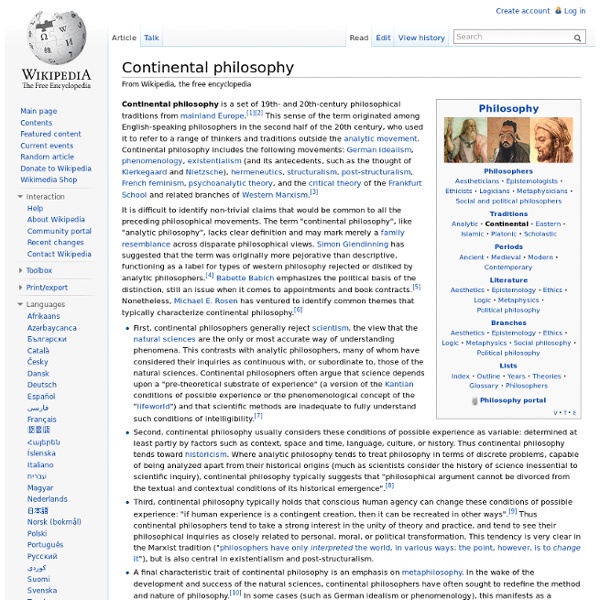 It is difficult to identify non-trivial claims that would be common to all the preceding philosophical movements. The term "continental philosophy", like "analytic philosophy", lacks clear definition and may mark merely a family resemblance across disparate philosophical views. Simon Glendinning has suggested that the term was originally more pejorative than descriptive, functioning as a label for types of western philosophy rejected or disliked by analytic philosophers.[4] Babette Babich emphasizes the political basis of the distinction, still an issue when it comes to appointments and book contracts.[5] Nonetheless, Michael E. First, continental philosophers generally reject scientism, the view that the natural sciences are the only or most accurate way of understanding phenomena. The term[edit] History[edit] Both before and after World War II there was a growth of interest in German philosophy in France. Recent Anglo-American developments[edit] See also[edit] Notes[edit] Related:  The problems with philosophy

Bad I.O.U.: Badiou’s Fidelity to the Event Logos 1. Immortality For Badiou, our mystical participation in the heroic Event is our triumph over mortality. Badiou’s Ethics includes a sustained polemic against a contemporary ideology of human rights that juxtaposes the “passive, pathetic or reflexive subject,” the mere suffering victim, to the “active, determining subject of judgment” that fights on behalf of the hapless victim. Badiou never reveals exactly which theorists or theories hold such depressing and idiotic tenets. Badiou’s polemic is certainly correct in attacking victimology, one of the banes of the contemporary world. We should remember that in the phallocratic French language “la victime” is one of the few generic words that is feminine. Note the typical Promethean view of nature or life as a hostile consuming power that threatens and limits heroic “Man” and challenges him to raise himself up above it, to “distinguish” himself. “In each case,” he says, “subjectivation is immortal, and makes Man. Perhaps he has a point. 2.

Philosophy of education The Philosophy of education examines the aims, forms, methods, and results of acquiring knowledge as both a process and a field of study.[1] As a field of applied philosophy, it is influenced both by developments within philosophy proper, especially questions of ethics and epistemology, and by concerns arising from instructional practice.[2] Philosophical treatments of education date at least as far back as Socrates, but the field of inquiry only began to be recognized as a formal subdiscipline in the nineteenth century.[3] As an academic subject, it is often taught within a department or college of education, rather than within a philosophy department.[4][5] Though the field often seems to lack the cohesion of other areas of philosophy, it is generally, and perhaps therefore, more open to new approaches.[6] Educational philosophies[edit] Movements[edit] Classical education[edit] Humanistic education[edit] Contemplative education[edit] Critical pedagogy[edit] Democratic education[edit]

German idealism Philosophical movement German idealism was a philosophical movement that emerged in Germany in the late 18th and early 19th centuries. It developed out of the work of Immanuel Kant in the 1780s and 1790s,[1] and was closely linked both with Romanticism and the revolutionary politics of the Enlightenment. The best-known thinkers in the movement, besides Kant, were Johann Gottlieb Fichte, Friedrich Wilhelm Joseph Schelling, Georg Wilhelm Friedrich Hegel, and the proponents of Jena Romanticism (Friedrich Hölderlin, Novalis, and Karl Wilhelm Friedrich Schlegel).[2] August Ludwig Hülsen, Friedrich Heinrich Jacobi, Gottlob Ernst Schulze, Karl Leonhard Reinhold, Salomon Maimon, Friedrich Schleiermacher, and Arthur Schopenhauer also made major contributions. The period of German idealism after Kant is also known as post-Kantian idealism, post-Kantian philosophy, or simply post-Kantianism.[3] Meaning of idealism[edit] The word "idealism" has multiple meanings. History[edit] Theorists[edit] Kant[edit]

Romanticism Artistic, literary, musical, and intellectual movement The movement emphasized intense emotion as an authentic source of aesthetic experience, placing new emphasis on such emotions as fear, horror and terror, and awe — especially that experienced in confronting the new aesthetic categories of the sublime and beauty of nature.[7][8] It elevated folk art and ancient custom to something noble, but also spontaneity as a desirable characteristic (as in the musical impromptu). In contrast to the Rationalism and Classicism of the Enlightenment, Romanticism revived medievalism[9] and elements of art and narrative perceived as authentically medieval in an attempt to escape population growth, early urban sprawl, and industrialism. Defining Romanticism[edit] Basic characteristics[edit] The nature of Romanticism may be approached from the primary importance of the free expression of the feelings of the artist. Etymology[edit] Period[edit] Context and place in history[edit] Literature[edit] Germany[edit]

World religions Menu Sponsored link. Symbols of some of the largest religions in the world: The symbols of fourteen religions are shown. This graphic was donated to us along with the copyright. A menu with links to non-theistic beliefs, ethical groups,philosophies, spiritual paths, etc is located elsewhere on this site. Approximate religious membership as a percentage of the world population: Introductory thoughts: Disclaimer: Information for these essays was extracted from reliable sources, and believed to be accurate and reasonably unbiased. If you find any errors here, please report them so that we can list them on our errata page and correct our essays. World religions: There are many, long established, major world religions, each with over three million followers. A thought-provoking image donated by Global Caring Ethics: If we had been born in Saudi Arabia, we would almost certainly hold Muslim beliefs; in Alabama: conservative Protestant Christian; in Thailand: Buddhist; in much of Europe: secular.