Introducing Michael Abrash, Oculus Chief Scientist. I'm tremendously excited to join Oculus, and when I think back, it's astonishing how unlikely the path to this moment is. 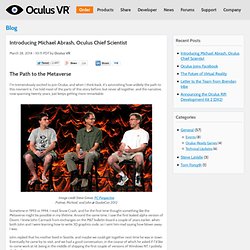 I've told most of the parts of this story before, but never all together, and the narrative, now spanning twenty years, just keeps getting more remarkable. Image credit Steve Grever, PC Perspective Palmer, Michael, and John @ QuakeCon 2012 Sometime in 1993 or 1994, I read Snow Crash, and for the first time thought something like the Metaverse might be possible in my lifetime.

Around the same time, I saw the first leaked alpha version of Doom. I knew John Carmack from exchanges on the M&T bulletin board a couple of years earlier, when both John and I were learning how to write 3D graphics code, so I sent him mail saying how blown away I was. John replied that his mother lived in Seattle, and maybe we could get together next time he was in town.

In late 1994 or early 1995, John let me know he was going to be back in town, and asked if I wanted to have dinner. Abrash Dev Days 2014.pdf. Oculus VR employees got death threats after Facebook sale [UPDATE] [UPDATE] Following the publication of this story, Oculus Rift creator Palmer Luckey wrote on Reddit that Oculus VR employees have received death threats in the wake of the company's sale to Facebook. 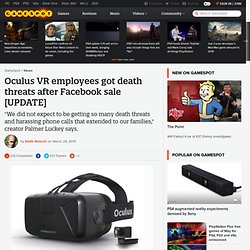 "We expected a negative reaction from people in the short term, we did not expect to be getting so many death threats and harassing phone calls that extended to our families," Luckey said. "We know we will prove ourselves with actions and not words, but that kind of sh** is unwarranted, especially since it is impacting people who have nothing to do with Oculus. " The original story is below. We have updated this story's headline to reflect Luckey's comments, which were made today. Following the surprise announcement Tuesday that Facebook had purchased Oculus VR for $2 billion, positive and negative comments flowed forth from social media. "We assumed that the reaction would be negative, especially from our core community," Mitchell said.

The Road to VR. A month after I wrote about John Carmack, he left id Software to become the CTO of Oculus. 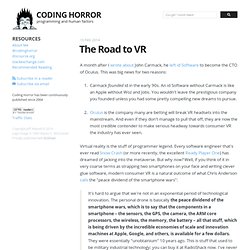 This was big news for two reasons: Carmack founded id in the early 90s. An id Software without Carmack is like an Apple without Woz and Jobs. You wouldn't leave the prestigious company you founded unless you had some pretty compelling new dreams to pursue. Oculus is the company many are betting will break VR headsets into the mainstream. Virtual reality is the stuff of programmer legend. It's hard to argue that we're not in an exponential period of technological innovation. It's no coincidence that another programming legend, Michael Abrash, is also head over heels in love with VR. I apologize that these are both PDFs, but like everything else Abrash writes, they are amazing. I thought VR would be at best a novelty in my lifetime. There's no shortage of breathless previews, such as this one at Gizmodo which ends with I'm optimistic about the next generation of Oculus Rift.

It's a start. I Tried VR and It Was Just OK. It's been about a year and a half since I wrote The Road to VR, and a … few … things have happened since then. 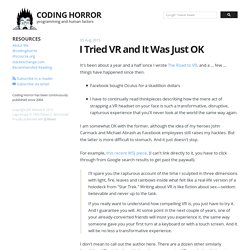 Facebook bought Oculus for a skadillion dollarsI have to continually read thinkpieces describing how the mere act of strapping a VR headset on your face is such a transformative, disruptive, rapturous experience that you'll never look at the world the same way again. I am somewhat OK with the former, although the idea of my heroes John Carmack and Michael Abrash as Facebook employees still raises my hackles. But the latter is more difficult to stomach. And it just doesn't stop. For example, this recent WSJ piece. I’ll spare you the rapturous account of the time I sculpted in three dimensions with light, fire, leaves and rainbows inside what felt like a real-life version of a holodeck from “Star Trek.” I don't mean to call out the author here.