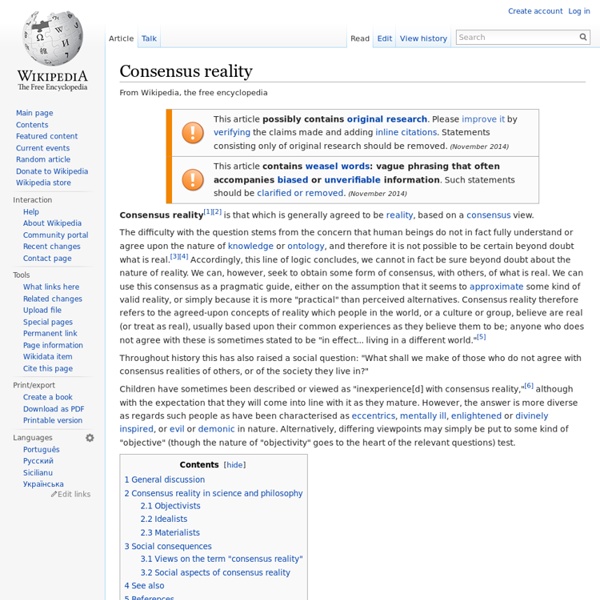 Consensus reality[1][2] is that which is generally agreed to be reality, based on a consensus view. The difficulty with the question stems from the concern that human beings do not in fact fully understand or agree upon the nature of knowledge or ontology, and therefore it is not possible to be certain beyond doubt what is real.[3][4] Accordingly, this line of logic concludes, we cannot in fact be sure beyond doubt about the nature of reality. We can, however, seek to obtain some form of consensus, with others, of what is real. We can use this consensus as a pragmatic guide, either on the assumption that it seems to approximate some kind of valid reality, or simply because it is more "practical" than perceived alternatives. Throughout history this has also raised a social question: "What shall we make of those who do not agree with consensus realities of others, or of the society they live in?" General discussion[edit] Consensus reality in science and philosophy[edit] Objectivists[edit]

Hyperreality In semiotics and postmodernism, hyperreality is an inability of consciousness to distinguish reality from a simulation of reality, especially in technologically advanced postmodern societies. Hyperreality is seen as a condition in which what is real and what is fiction are seamlessly blended together so that there is no clear distinction between where one ends and the other begins.[1] It allows the co-mingling of physical reality with virtual reality (VR) and human intelligence with artificial intelligence (AI).[2] Individuals may find themselves for different reasons, more in tune or involved with the hyperreal world and less with the physical real world. Some famous theorists of hyperreality/hyperrealism include Jean Baudrillard, Albert Borgmann, Daniel J. Boorstin, Neil Postman and Umberto Eco. Origins and usage[edit]

Anti-realism Anti-realism in philosophy[edit] Michael Dummett[edit] , without being able to produce any term of which holds. Dummett argues that the intuitionistic notion of truth lies at the bottom of various classical forms of anti-realism. Reality Reality Reality is a consciousness program (hologram, simulation, illusion, dream) created by digital codes. Numbers, numeric codes, define our existence and experiences. Human DNA, our genetic memory, triggers (remembers) by digital codes at specific times and frequencies as we experience. Those codes awaken the mind to the change and evolution of consciousness.

Introduction What is Arduino? Arduino is a tool for making computers that can sense and control more of the physical world than your desktop computer. It's an open-source physical computing platform based on a simple microcontroller board, and a development environment for writing software for the board. Arduino can be used to develop interactive objects, taking inputs from a variety of switches or sensors, and controlling a variety of lights, motors, and other physical outputs. Arduino projects can be stand-alone, or they can communicate with software running on your computer (e.g.

Ultimate reality A swastika (Sanskrit: "It Is the Good") drawn by the rotation of the seven stars of the Big Dipper and Ursa Minor around the pole star, in the four phases of a day. Both the swastika symbol and the mentioned asterisms are known since immemorial times and in many cultures of the world to represent the Absolute principle of reality, the God of the Universe, in its action of manifestation as a whirlwind around the Centre.[note 1][note 2] The experience of the Absolute or the Holy, or the Mystery (from Greek myein: "to conceal", "to hide", "to hush") of the mystics, is defined by Mircea Eliade as a coincidentia oppositorum (coincidence or solution of all the opposites), that can be furtherly understood as a "state of wholeness" or "nostalgia for the primordial completeness and bliss".[4] Thus, the Sacred or Absolute is reality, being as such.

Simulated reality Simulated reality is the hypothesis that reality could be simulated—for example by computer simulation—to a degree indistinguishable from "true" reality. It could contain conscious minds which may or may not be fully aware that they are living inside a simulation. This is quite different from the current, technologically achievable concept of virtual reality. Virtual reality is easily distinguished from the experience of actuality; participants are never in doubt about the nature of what they experience. Richard Dawkins talks atheism, proof and science Penn students, Philadelphia residents and even one brave soul who flew in from Atlanta, Ga. crowded into Irvine Auditorium last night to hear a polarizing figure speak. Richard Dawkins — evolutionary biologist and former Oxford University professor — addressed a crowd of about 1,500 with a lecture titled “Proof, Science and Skepticism” for the Philomathean Society’s Annual Oration, in celebration of the group’s 200th anniversary. In honor of Dawkins’ contributions to his field, he was awarded the University of Pennsylvania Museum of Archaeology and Anthropology’s Wilton Krogman Award. He is the fourth recipient of this award, joining the ranks of such distinguished researchers as Donald Johanson, who discovered the 3.2 million year-old hominid fossil “Lucy.” Dawkins’ oration, however, focused primarily on a chapter of his new book, “The Magic of Reality: How We Know What’s Really True,” titled “Why Bad Things Happen.”

Continental philosophy It is difficult to identify non-trivial claims that would be common to all the preceding philosophical movements. The term "continental philosophy", like "analytic philosophy", lacks clear definition and may mark merely a family resemblance across disparate philosophical views. Simon Glendinning has suggested that the term was originally more pejorative than descriptive, functioning as a label for types of western philosophy rejected or disliked by analytic philosophers.[4] Babette Babich emphasizes the political basis of the distinction, still an issue when it comes to appointments and book contracts.[5] Nonetheless, Michael E.

The Art Of Storytelling » Tell A Story Get inspired by featured artwork from the Delaware Art Museum and write a story through the interactive Tell a Story activity. Look through the images below for a brief introduction on how this activity works, or click on the link below to begin telling your story. Launch the Tell a Story Activity 1) Choose an inspirational work of art Determinism Determinism is the philosophical position that for every event, including human action, there exist conditions that could cause no other event. "There are many determinisms, depending upon what pre-conditions are considered to be determinative of an event. Libertarianism (metaphysics) The term "libertarianism" in a metaphysical or philosophical sense was first used by late Enlightenment free-thinkers to refer to those who believed in free will, as opposed to determinism.[9] The first recorded use was in 1789 by William Belsham in a discussion of free will and in opposition to "necessitarian" (or determinist) views.[10][11] Metaphysical and philosophical contrasts between philosophies of necessity and libertarianism continued in the early 19th century.[12] Explanations of libertarianism that do not involve dispensing with physicalism require physical indeterminism, such as probabilistic subatomic particle behavior – theory unknown to many of the early writers on free will. Physical determinism, under the assumption of physicalism, implies there is only one possible future and is therefore not compatible with libertarian free will. Nozick puts forward an indeterministic theory of free will in Philosophical Explanations.[6]

Quantum Life The Quantum Life Model The quantum life model rests on a number of mechanisms in living systems, coupled with the properties of the quantum field. I would like to explain those mechanisms very briefly. A longer explanation is available in the book. The goal of the quantum life model is to provide a unified explanation of the full range of human experience. Mainstream science does a good job with matter and the forces that affect it, but it completely ignores all of the non-material aspects of the human experience: things like premonitions, energy healing, psychics, spirit and god.

Tired light Tired light is a class of hypothetical redshift mechanisms that was proposed as an alternative explanation for the redshift-distance relationship. These models have been proposed as alternatives to the metric expansion of space of which the Big Bang and the Steady State cosmologies are the most famous examples. The concept was first proposed in 1929 by Fritz Zwicky, who suggested that if photons lost energy over time through collisions with other particles in a regular way, the more distant objects would appear redder than more nearby ones. Zwicky himself acknowledged that any sort of scattering of light would blur the images of distant objects more than what is seen. History and reception[edit] Basing on Slipher's and Hubble's data, in 1927 Georges Lemaître realized that this correlation fit non-static solutions to the equations of Einstein's theory of gravity, the Friedmann–Lemaître solutions.