Oculus - Oculus VR. GoPro unveils a 360-degree camera array for VR videos. Now that Google has announced Jump, a new VR technology platform that lets you create and share 3D content, you're probably wondering how you can do exactly that. 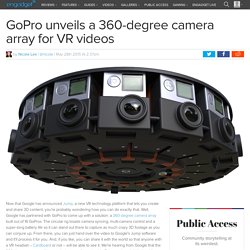 Well, Google has partnered with GoPro to come up with a solution: a 360-degree camera array built out of 16 GoPros. The circular rig boasts camera syncing, multi-camera control and a super-long battery life so it can stand out there to capture as much crazy 3D footage as you can conjure up. From there, you can just hand over the video to Google's Jump software and it'll process it for you. And, if you like, you can share it with the world so that anyone with a VR headset -- Cardboard or not -- will be able to see it. We're hearing from Google that the 360-degree camera will be seeded out to a few select YouTubers at least initially, but it'll eventually be up for purchase to any and all wannabe VR content creators. Don't miss out on all the latest news and updates from Google I/O 2015. 360 Plug-n-Play Holders. How Oculus Rift Is About to Reshape Marketing Creativity. 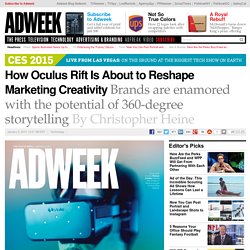 (Yes, such people actually exist and are about to become hot commodities among talent recruiters.) In the mid-2000s, Bennett had her avatar boots on the Internet-code-built ground of Second Life, constructing cyber experiences for her employer at the time, MTV Networks. Of course, Second Life never really took off. So with her been there, done that perspective several years later as chief content officer at Two Bit Circus, she does not deal in hyperbole when it comes to the impact the much-hyped virtual reality headset Oculus Rift will have on marketing. Rather, Bennett leans on data. Oculus Rift's developer kit provides a glimpse into the future.Photo: Maciek Jasik Oculus, you see, isn't just an oxygen mask for fantasies—it has the potential to do nothing short of inventing a whole new universe of marketing. "We didn't really have any virtual-reality work this time last year," says Bennett. Oculus Rift founder Palmer Luckey. How Oculus Rift Is About to Reshape Marketing Creativity. 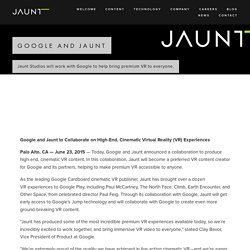 In this collaboration, Jaunt will become a preferred VR content creator for Google and its partners, helping to make premium VR accessible to anyone. Jaunt VR. Live Concerts, World Travel & More — in Virtual Reality — The Coffeelicious. Jack White: THIRD-D If you’re a fan of of Jack White (formerly of The White Stripes), or rock music in general, you’ll love his THIRD-D concert app. 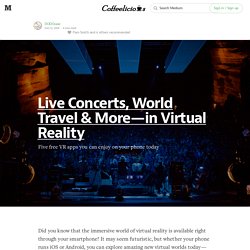 Released just this week, this Android app works with any cardboard VR viewer. The download time is longer than usual, but it’s worth the wait to experience the band playing songs from Fenway Park and Red Rocks in expansive, 360˚cinematic display. The people to thank for your side-of-the-stage POV are the team at Jaunt VR, who created this amazing experience by shooting the concert in stereoscopic 3D. 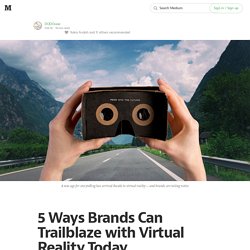 The reaction was magical and immediate. And as a result, Google has expanded their platform and hired even more virtual reality makers to join their team. In the first twenty-four hours after Google’s announcement, the team here at DODOcase created our own version of Cardboard. Google liked it so much they’ve made us an official partner — and this month, we launched our brand new, pop-up viewer, which assembles in under thirty seconds.

Brands and agencies have taken note of Cardboard too, because they recognize it as an entrée into the next generation of storytelling mediums. Be True To The Medium Scott Broock offered even more advice. 2. VR Development Shops: Framestore. 3. 4. 5. Original Virtual Reality Cardboard Pop-Up Viewer. We believe that the next million virtual reality experiences will happen on smartphones — a device that’s already in your pocket. 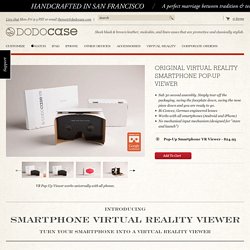 And we’ve now made it possible for people everywhere to explore virtual reality in a cost effective, easy way with our new Smartphone Virtual Reality Viewer. This pop-up viewer can be built in 30 seconds so you can experience the immersive, fun and exciting world of VR in a matter of minutes. Fly through the Grand Canyon, play 3-D games, travel the city streets of Paris or become a character in an animated film. With so many free apps available for Android and iPhone (and more coming), it’s as simple as downloading an app to your smartphone and using the cardboard viewer to experience virtual reality.

The DODOcase VR toolkit contains everything you need to get started.