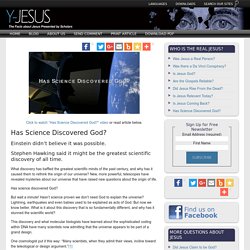 Video or read article below. Einstein didn’t believe it was possible. Stephen Hawking said it might be the greatest scientific discovery of all time. What discovery has baffled the greatest scientific minds of the past century, and why has it caused them to rethink the origin of our universe? New, more powerful, telescopes have revealed mysteries about our universe that have raised new questions about the origin of life.

Has science discovered God? But wait a minute! This discovery and what molecular biologists have learned about the sophisticated coding within DNA have many scientists now admitting that the universe appears to be part of a grand design. One cosmologist put it this way: “Many scientists, when they admit their views, incline toward the teleological or design argument.”[1] Surprisingly, many scientists who are talking about God have no religious belief whatsoever.[2] 1. 2. 3. Philosophy of Mind (50 books) Best General Science Books (377 books) The Fortean Bookshelf (61 books) Carl Jung Said We Have Four Stages In Life; Which Stage Are You Experiencing?

Carl Jung was a Swiss psychiatrist, in the early to mid 1900′s, credited with the creation of analytical psychology. 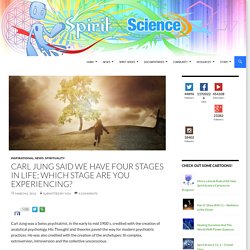 His Thought and theories paved the way for modern psychiatric practices. He was also credited with the creation of the archetypes: th complex, extroversion, introversion and the collective unconscious. He was a prolific philosopher that directly influenced great minds like Joseph Campbell, Herman Hesse, Alan Watts, Erich Neumann and many others. He linked together human’s innate spirituality and linked it to the various sciences.

A Review of General Psychology survey named Jung as the 23rd most cited psychologist of the 20th century. The Athlete Stage This stage is marked by a preoccupation with with physical appearances. We use the physical world to begin to ground ourselves in a version of reality. The Warrior Stage We have come to identify certain feelings with particular actions and patterns. This leads us to want to conquer and impose our will, for the our own good. DARPA - PROJECT PEGASUS. Web Bot: Andrew Basiago is predicted "planetary level" whistleblower for Mars life and time travel By Alfred Labremont Webre November 9, 2009 A September 15, 2009 report using Asymmetric Language Trend Analysis (ALTA) of data collected by the Web Bot predicts that “It is very likely that the ‘whistleblower’ who had been described in previous ALTA reports (see 1309) as emerging out of the period of the [coagulation] of the [government/officialdom of the USofA due to financial structure collapse] is a person by the name of [Andrew D. 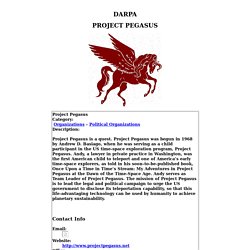 Basiago].” Clif High, administrator of the Web Bot and author of the ALTA report, states that the truth campaign of American whistle blower Andrew D. Basiago will raise Mr. Basiago published a paper entitled The Discovery of Life on Mars on December 12, 2008 that contains photographic evidence and textual analysis of humanoid beings, animal species, carved statues, and built structures on Mars. Unreality and Reality - Sri Chinmoy. Dear seekers, dear friends, dear sisters and brothers, I wish to give a short talk on unreality and reality. 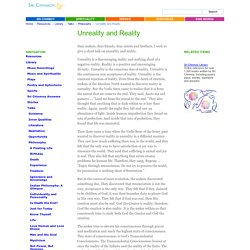 Unreality is a discouraging reality and nothing short of a negative reality. Reality is a positive and encouraging divinity. Unreality is the conscious fear of reality. Unreality is the continuous non acceptance of reality. Unreality is the constant rejection of reality. Then there came a time when the Vedic Seers of the hoary past wanted to discover reality in unreality in a different manner. But in the course of inner evolution, the seekers discovered something else. The seeker tries to elevate his consciousness through prayer and meditation and reach the highest state of consciousness. Our New Home: Inner Earth called Agartha!: Reality is a truly amazing experience from which you have collectively shut yourselves off for far too long, and that is about to be put permanently to rights. You were created one with God; His Will and yours ar. "The fact that you do not experience that state demonstrates quite clearly that you must be deluded. 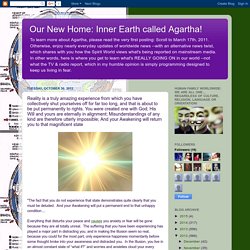 And your Awakening will put a permanent end to that unhappy condition.... Everything that disturbs your peace and causes you anxiety or fear will be gone because they are all totally unreal. The suffering that you have been experiencing has played a major part in distracting you, and in making the Illusion seem so real, because you could for the most part, only experience happiness momentarily before some thought broke into your awareness and distracted you. In the Illusion, you live in an almost constant state of “what if?”