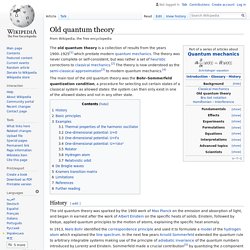 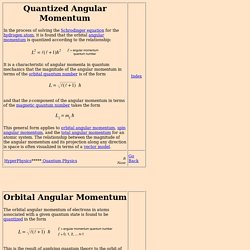 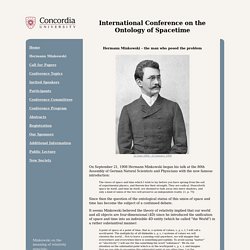 They are radical. Henceforth space by itself, and time by itself, are doomed to fade away into mere shadows, and only a kind of union of the two will preserve an independent reality. [1, p. 75] Minkowski 80th assembly. Minkowski space time internal rotstions. Minkowski diagram. Minkowski space. Hermann Minkowski (1864–1909) found that the theory of special relativity, introduced by his former student Albert Einstein, could be best understood as a four-dimensional space, since known as the Minkowski spacetime. 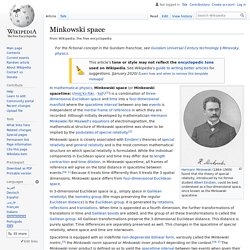 Minkowski space is closely associated with Einstein's theory of special relativity and is the most common mathematical structure on which special relativity is formulated. While the individual components in Euclidean space and time may differ due to length contraction and time dilation, in Minkowski spacetime, all frames of reference will agree on the total distance in spacetime between events. [nb 1] Because it treats time differently than it treats the 3 spatial dimensions, Minkowski space differs from four-dimensional Euclidean space. Spacetime is equipped with an indefinite non-degenerate bilinear form, variously called the Minkowski metric,[2] the Minkowski norm squared or Minkowski inner product depending on the context. 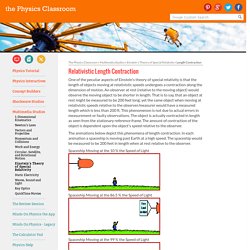 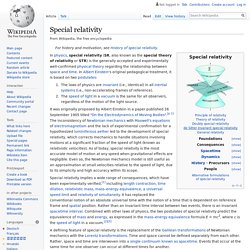 In Albert Einstein's original pedagogical treatment, it is based on two postulates: It was originally proposed by Albert Einstein in a paper published 26 September 1905 titled "On the Electrodynamics of Moving Bodies". [p 1] The inconsistency of Newtonian mechanics with Maxwell's equations of electromagnetism and the lack of experimental confirmation for a hypothesized luminiferous aether led to the development of special relativity, which corrects mechanics to handle situations involving motions at a significant fraction of the speed of light (known as relativistic velocities).

The Annus Mirabilis of Albert Einstein: Science Reference Guide - Science Reference Services, Library of Congress) The 1905 Papers Concerning an Heuristic Point of View Toward the Emission and Transformation of Light. 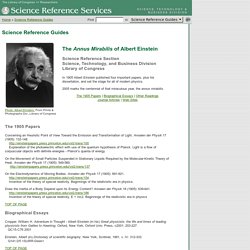 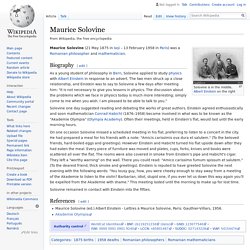 Biography[edit] As a young student of philosophy in Bern, Solovine applied to study physics with Albert Einstein in response to an advert. The two men struck up a close relationship, and Einstein was to say to Solovine a few days after meeting him: "It is not necessary to give you lessons in physics. The discussion about the problems which we face in physics today is much more interesting; simply come to me when you wish. I am pleased to be able to talk to you. " Conrad Habicht. Conrad Habicht (December 28, 1876, Schaffhausen – October 23, 1958, Schaffhausen) was a Swiss mathematician and close personal friend of Albert Einstein. 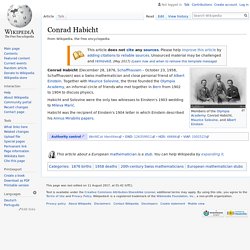 Together with Maurice Solovine, the three founded the Olympia Academy, an informal circle of friends who met together in Bern from 1902 to 1904 to discuss physics. Habicht and Solovine were the only two witnesses to Einstein's 1903 wedding to Mileva Marić. Einstein the olympia academy. Einstein and miles daughter Lieserl. Einstein in the patent office. Annus Mirabilis papers. Einstein in 1904 or 1905, about the time he wrote the Annus Mirabilis papers The Annus mirabilis papers (from Latin annus mīrābilis, "extraordinary year") are the papers of Albert Einstein published in the Annalen der Physik scientific journal in 1905. 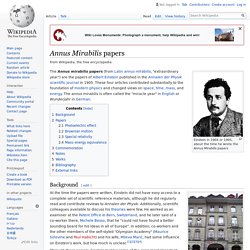 These four articles contributed substantially to the foundation of modern physics and changed views on space, time, mass, and energy. The annus mirabilis is often called the "miracle year" in English or Wunderjahr in German. Background[edit] Photoelectric effect einstein's miracle year - Recherche Google. Photoelectric effect. Planck's constant and quanta. Planck and the Quanta. At the time Planck's results could not be explained by current conventional thought regarding light. It was an extremely radical idea to suggest that energy could only come in discrete lumps, even if the lumps were very small. Planck actually didn't realize how revolutionary his work was at the time; he thought he was just fudging the math to come up with the right answer, and was convinced that someone else would come up with a better explanation for his formula.

The curve shown sumarizes his findings and is sometimes called the Planck distribution. Based on Planck's work, Einstein proposed that light also delivers its energy in chunks; light would then consist of little particles, or quanta, called photons, each with an energy of Planck's constant times its frequency. Max plank. Planck constant. Plaque at the Humboldt University of Berlin: "Max Planck, discoverer of the elementary quantum of action h, taught in this building from 1889 to 1928. " At the end of the 19th century, physicists were unable to explain why the observed spectrum of black body radiation, which by then had been accurately measured, diverged significantly at higher frequencies from that predicted by existing theories.

In 1900, Max Planck empirically derived a formula for the observed spectrum. He assumed that a hypothetical electrically charged oscillator in a cavity that contained black body radiation could only change its energy in a minimal increment, E, that was proportional to the frequency of its associated electromagnetic wave.[7] He was able to calculate the proportionality constant, h, from the experimental measurements, and that constant is named in his honor.