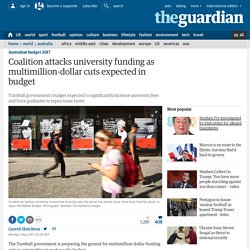 It is also expected to increase university fees significantly and force university graduates to pay back their loans faster, in a bid to reduce funding pressures on the commonwealth, according to reports. The education minister, Simon Birmingham, has released a new report from Deloitte Access Economics, commissioned by the government, showing universities are already getting enough funding to cover the cost of teaching most degrees. The report, Cost Delivery of Higher Education, looks at 17 universities and shows that, between 2010 and 2015, the average cost of delivery per student increased by 9.5%, while per student funding grew by 15% (including student contributions and commonwealth grant scheme funding).

'Enough is enough': universities tell government to back off after $4bn in budget cuts. Universities Australia has told the government to look elsewhere for budget savings, releasing an analysis that shows almost $4bn has been cut from the sector and its students since 2011. 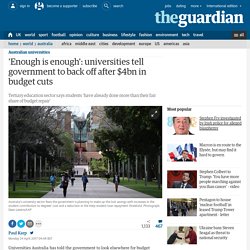 The tertiary education sector is increasingly confident that the Turnbull government will finally drop its unlegislated plan to cut 20% of funding from universities but is seeking to head off a range of other possible cuts in the 9 May budget. The university sector fears the government is planning to make up the lost savings with a possible 2-3% efficiency dividend on their base funding, and potential increases in the student contribution to degrees’ cost and a reduction in the Help student loan repayment threshold. University students face fee rise of 7.5% as funding to sector cut by $2.8bn. The federal government will cut university funding through a two-year efficiency dividend and an increase in students’ fees in a $2.8bn hit on the sector, the education minister, Simon Birmingham, revealed on Monday night. 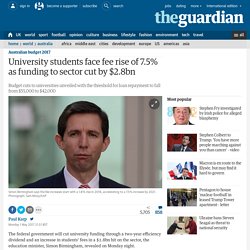 In its 9 May budget the government will also lower the repayment threshold for student loans from $55,000 to $42,000. Birmingham told an event co-hosted by the Australian Industry Group and Universities Australia in Canberra that the package was “fair, reasonable and necessary” to make the government contribution to the sector sustainable. As anticipated by the tertiary education sector, the federal government has dropped plans to cut university funding by 20%, replacing it with a 2.5% efficiency dividend on commonwealth grant scheme payments in both 2018 and 2019. Fuel_Security_Report. Australia nearly completely dependent on imported fuel - RN Breakfast. Australia is the ninth largest energy producer in the world but would run out of petrol in just three weeks if imports were interrupted. 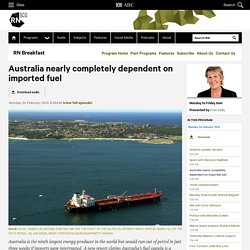 A new report claims Australia's fuel supply is a national security issue and urges the government to save the oil refining industry, writes Alex McClintock. Fall in home ownership threatens to sink Australia's retirement system. The declining rate of home ownership in Australia is becoming so serious it could undermine the superannuation system, a new report warns. 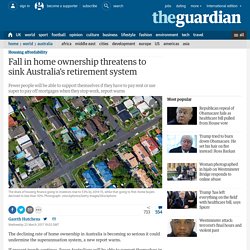 If present trends continue, fewer Australians will be able to support themselves in retirement without relying on the age pension, the report says. Future governments will face growing pressure to increase the level of the age pension and commonwealth rent assistance. What does the future hold for students starting university today? For tens of thousands of young Australians, today marks the start of the rest of their lives: orientation week and the beginning of their university careers. 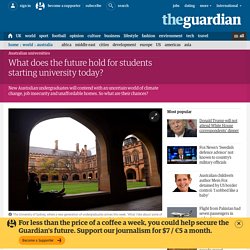 Alan Watts - Why Your Life Is Not A Journey. Almost half of Australian school students bored or struggling, says Grattan Institute. Montage: Enterprise On-Demand Video Interviewing Solution. Choose your pathway. Study reveals Australia no longer the 'lucky country' for millennials. Millennials in Australia no longer consider it the "lucky country" and are less optimistic about the future than their counterparts in developing economies including the Philippines, Indonesia and India. 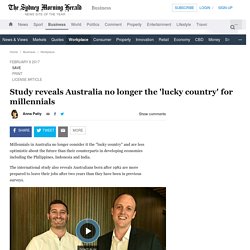 Company Reviews: Job Reviews and Ratings Direct from Employees. We believe in job seekers becoming familiar with a company before committing to joining their team. 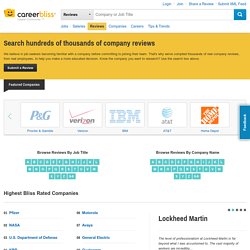 That's why we've compiled thousands of real company reviews, from real employees, to help you make a more educated decision. Know the company you want to research? Use the search box above. Submit a Review. Letter from a disgruntled employer. Personal SWOT Analysis - Career Planning from MindTools.com. Making the Most of Your Talents and Opportunities Learn how to conduct a personal SWOT Analysis. 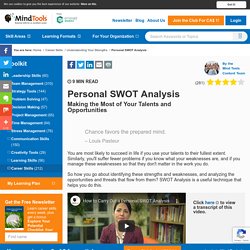 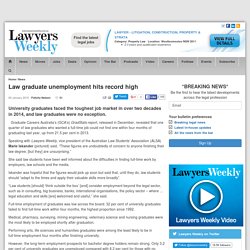 Graduate Careers Australia’s (GCA’s) GradStats report, released in December, revealed that one quarter of law graduates who wanted a full-time job could not find one within four months of graduating last year, up from 21.5 per cent in 2013. Speaking with Lawyers Weekly, vice president of the Australian Law Students’ Association (ALSA) Marie Iskander (pictured) said, “These figures are undoubtedly of concern to anyone finishing their law degree, [but they] are unsurprising.”

A writer from lawgrads.weebly.com published an article in September 2013 exploring the state of affairs for Australian law graduates and law schools. Click on the button below to read the article. Everybody hates lawyers. Alongside politicians and sex workers, lawyers rank among the least trusted professions. Job Search Stress? 4 Key Ways To Manage Your Angst. Even under the best of circumstances looking for work is difficult. Life as you know it has changed and your overall well-being is affected.

Among recent science graduates who found full-time jobs, only half say their qualification is required or important for their job – about 20 percentage points below the average. Although job outcomes improve over time, science bachelor degree graduates are less likely than other STEM graduates to work in high-skill managerial or professional jobs. Despite poor employment outcomes, demand for science courses continues to grow. Higher Education: Never mind the quality, feel the width. « LUCKY CULTURE. Published in The Australian, January 7, 2014. Deakin University students kicked out for 'contract cheating' Chris Hedges, Columnist. Strangers Wrote Their Biggest Regrets…They All Used The Same Three-Letter Word.

In Japan, working yourself to death it's so common there's even a word for it. Why Your Brain Hates the Job Search. Theconversation. UCU report: ‘academics work two days a week unpaid’ When university can seem as distant as Mars. A study from the Sutton Trust has found that year 9 girls aged 13 to 14 are more likely to have a positive attitude towards university than their male classmates. Degrees of Deception - Four Corners. Career Choice - CareerHQ. CareerHQ. 201510091525. University graduate careers: Employment figures down. Theconversation. 19 Reasons Graduating From University Is Absolutely Terrifying. Centre for the Study of Higher Education. A rich history of failure: Australian history according to undergraduates. ATAR: Panel to change university admission standards. 50 Doomiest Graphs of 2010. Long road to freedom for former child soldier. Theconversation. Theconversation. Academics are unhappy – it's time to transform our troubled university system.

Graduate jobs: Employers unhappy with new generation of workers. A world without work is coming – it could be utopia or it could be hell. The Brisbane Declaration. Oh the Joys and Pains of a Lecturer. Home - The Law Handbook. Job Outlook - Make Your Career a Reality. SME Association of Australia - Welcome to the SME Association of Australia. Top 20 Career Blogs for 2015. This resume for Elon Musk proves you never need to use more than one page. A Princeton professor has published a CV of his failures online, and people are freaking out about it. Caught in an unemployment netherworld: too young to retire, too old to get a job. Generation X Is Sick of Your Bullshit. Gen Y: Australia's most educated generation faces worst job prospects in decades. "How is this an issue? Just ask ten fucking interview questions."