US of A Political Thought 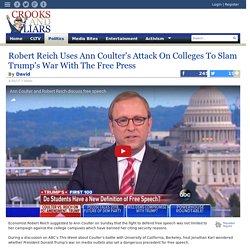 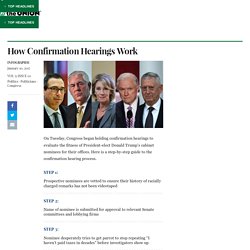 How Republicans Plan To Repeal And Replace Obamacare. Congressional Republicans have repeatedly stated their intention to repeal and replace the Affordable Care Act soon after Donald Trump takes office. 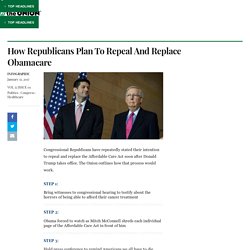 The Onion outlines how that process would work. Bring witnesses to congressional hearing to testify about the horrors of being able to afford their cancer treatment Obama forced to watch as Mitch McConnell shreds each individual page of the Affordable Care Act in front of him Hold press conference to remind Americans we all have to die sometime Draft new healthcare bill with, uh, vouchers, maybe? Yeah, vouchers sound good. Put them in there. Wasserman Schultz Has a Change of Heart, but Too Little, Too Late. By Bill Moyers and Michael Winship Source: Alternet Return with us now to the saga of Debbie Wasserman Schultz and the soul of the Democratic Party. 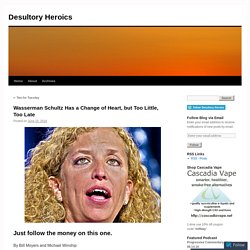 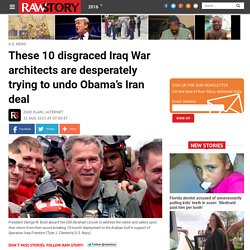 Bush aboard the USS Abraham Lincoln to address the nation and sailors upon their return from their record-breaking 10-month deployment to the Arabian Gulf in support of Operation Iraqi Freedom (Tyler J. Clements/U.S. Navy) Here's What It Would Look Like If Lawmakers Wore Donors' Logos Like NASCAR Drivers.

Omniorthogonal: Swinging Dicks. All politics is sexual politics; the president is supposed to be the Big Swinging Dick of the nation. 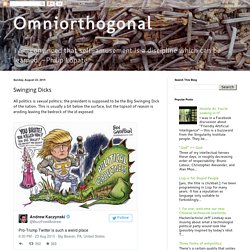 This is usually a bit below the surface, but the topsoil of reason is eroding leaving the bedrock of the id exposed: In a similar vein, there was an idiot on Press the Meat this morning (Alex Castellanos) repeating the line about how Obama was "the first female president" and how we need a "manly" president for gladiatorial combat: Politics is always something of a dick-measuring contest, and Trump's power (and the reason he is a threat to the system) is that he brings it into the open, he's far too obvious about the fact that he's running for the post of alpha baboon. “Ted Cruz gives me the willies”: Camille Paglia analyzes the GOP field — and takes on Hillary Clinton. In the first two parts of Salon’s conversation with Camille Paglia, we covered Bill Cosby and Bill Clinton, the return of the ’90s sensibility, and then the rise of Bernie Sanders and Donald Trump. 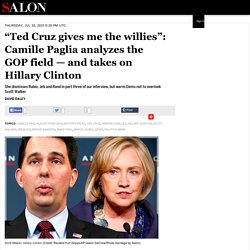 Today Paglia trains her devastating insight and wit on the rest of the GOP field — look out Ted Cruz, Marco Rubio and Jeb Bush. She also has some surprising thoughts on why Hillary Clinton will not be the Democratic nominee — and why it would be unwise for Democrats to overlook the appeal of Scott Walker. “The Daily Show” skewers hipster Christians in pitch-perfect correspondent segment. Beware, the future of Christianity looks like this: plaid button-ups, skinny jeans and smartphone-accessible bible verses. 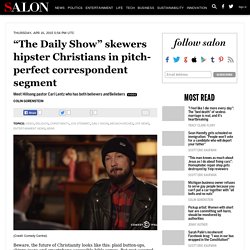 But rest assured, it’s “super, super, super dope.” Last night’s “Daily Show” featured a correspondent segment which poked fun at America’s megachurches, zeroing in on the impossibly hip Hillsong church which has long been shaping Christian youth culture. According to New York Times’ 2014 write-up, Hillsong is remarkable not just because of its hipness but because of what its hipness transcends: “Its target is young Christians in big cities, where faith seems out of fashion but where its services are packing them in,” Michael Paulson writes in “Megachurch With a Beat Lures a Young Flock.” Diving into this phenomenon, “The Daily Show” presents us with Pastor Carl Lentz, the pastor of Hillsong NYC Church, who has “both believers and Beliebers.” Scott Walker’s “Sarah Palin” problem: What’s really behind his media hostility. According to the Urban Dictionary a “Gotcha Question” is defined as a question that Sarah Palin is “too stupid to answer.” 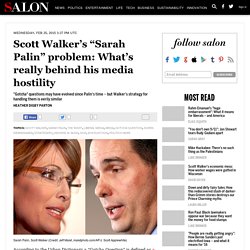 For instance: Charles Gibson: “Do you agree with the Bush Doctrine?” Sarah Palin: “In what respect Charlie?” Charles Gibson: “What do you interpret it to be?” 6 Scenes We Love About the Sham of Democracy. Metro-Goldwyn-Mayer Studios Inc. 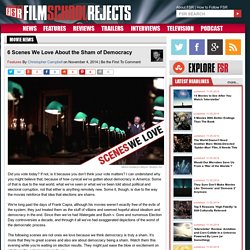 Did you vote today? If not, is it because you don’t think your vote matters? I can understand why you might believe that, because of how cynical we’ve gotten about democracy in America. Some of that is due to the real world, what we’ve seen or what we’ve been told about political and electoral corruption, not that either is anything remotely new.

From 'no' to 'yes,' how Colorado and Washington legalized marijuana. In the late-1980s heyday of the anti-drug "Just Say No" campaign, a man calling himself "Jerry" appeared on a Seattle talk radio show to criticize U.S. marijuana laws. Skip to next paragraph Subscribe Today to the Monitor Click Here for your FREE 30 DAYS ofThe Christian Science MonitorWeekly Digital Edition An esteemed businessman, he hid his identity because he didn't want to offend customers who — like so many in those days — viewed marijuana as a villain in the ever-raging "war on drugs.

" Why Asians Vote Democrat. 5 hard truths progressives must face about Obama. This article originally appeared on AlterNet. Terrorized by the prospect of a complete takeover of the U.S. government by right-wing reactionaries—progressive Democrats swallowed their unhappiness with Barack Obama throughout the campaign. They gamely defended his policies on the economy, health care, budget priorities and other issues on which they felt betrayed in his first term. We’ve now dodged the bullet of a Mitt Romney White House, so let’s get back to reality. It Was the Best of Times, It Was the Best of Times - The Daily Show with Jon Stewart - 11/15.

America on the Cusp of Fascism. I use “fascism” here not as a cliché, but as an historical-structural formation principally rooted in the mature stage of capitalism, in which business-government interpenetration (what the Japanese political scientist Masao Maryuma called the “close-embrace” system) has created hierarchical social classes of wide differences in wealth and power, the militarization of social values and geopolitical strategy, and a faux ideology of classlessness to instill loyalty for the social order among working people.

In fact, each of these factors is already present to a high degree in America–superbly disguised however by the rhetoric of liberalism, as in Mr. Obama’s presidency. This said, my provocative hypothesis (only slightly tongue-in-cheek) is that in the coming election Romney is preferable to Obama. Congress Repairs To Parlor To Hear Rep. Carolyn Maloney Play The Recorder. The US presidential debates' illusion of political choice. Mitt Romney and Barack Obama participate in the first presidential debate at the University of Denver. Photo by snoopdogg. Colbert Mocks Mitt Romney's Half-Smile During Presidential Debate. Bill Maher Schools Frank Luntz On Rich Democrats vs. Rich Republicans. Presidential Debate Aftermath: Mitt Romney Wins All-Important BS Contest. The Four Most Misleading Moments In Romney's Debate Performance.

The pundits are unanimous. Mitt Romney had more energy, offered more specifics, and may even have come across as more empathetic. I agree and polls suggest voters saw it the same way. Should You Vote for Barack Obama? If you were to judge them against the records of previous Democratic presidents, it’s clear that President Obama is the most liberal president since Lyndon Johnson. The American Recovery and Reinvestment Act prevented a second Great Depression and invested billions in education, clean energy, and future technologies.

The Affordable Care Act has put the United States on the path toward universal health coverage, and a more sustainable health care system. An Interview With Noam Chomsky. Noam Chomsky’s latest books are Occupy (Zuccotti Park Press) and Making the Future: Occupations, Interventions, Empire and Resistance (City Lights Publishers). This Presidential Race Should Never Have Been This Close. Mitt Romney's problems: Elite defection. JOHN SIDES, a political-science professor at George Washington University, thinks Mitt Romney's embarrassing fund-raiser video is unlikely to affect the race much. Supporter Complains to Ryan: 'Educated People' Are 'Telling Me What to Do' Thurston Howell Romney. The Real Romney Is a Sneering Plutocrat. Presidential campaigns wallow so tediously in pseudo-events and manufactured outrage that our senses can be numbed to the appearance of something genuinely momentous.

Mitt Romney’s secretly recorded comments at a fund-raiser are such an event — they reveal something vital about Romney, and they disqualify his claim to the presidency. Foreign Policy Flubs Can Be Campaign Coffin Nails: HuffPost List. Conservatives killed the liberal arts. The psychology of defeat. Inverted Totalitarianism and the Corporate State.

Totalitarian Democracy. Unpartial. How the GOP Became the Party of the Rich. Sanctity of Human Life Act (H.R. 212. The Soul Suckers of Endless Compromise. The Mitt Romney Story - The Colbert Report - 2012-29-08. Meanness Mashup: Republicans Built It, Said It, Own It. Gay Marine Beaten To Bloody Pulp To Fire Up RNC Crowd. Jon Stewart: ‘We built this’ RNC theme a tribute to union workers. House Speaker John Boehner asks ‘Where are the jobs?’ in convention speech. GOP Convention To Feature Strong Lineup Of Conservative Women Listeners. Real GOP: Pregnancy From Rape Same As Pregnancy Out of Wedlock. Lubbock Official Tom Head Stirs City With Remark. Authoritarian Politics in the Age of Casino Capitalism.

Top 13 Questions From Our Q&A on Dark Money in the 2012 Campaign. Adam Sandler Owns Bill OReilly on 9/11 and Jake Prices Mum's Minge has Bad Breath. Jesse LaGreca: An Open Letter to the Haters. Jeb Bush: Republican Party Needs 'To Reach Out To A Much Broader Audience' Todd Akin's Pals Got Some Junk Science For You: HuffPost List. A Guide To Spotting Pretzel Logic On The Campaign Trail : It's All Politics. GOP Platform Anti-Abortion Language Includes No Exceptions For Rape, Incest : It's All Politics. Things That Shouldn't Be Said In Modern Society To Be Said At Least 1,400 Times At RNC.