Neuroscience, free will and determinism: 'I'm just a machine' 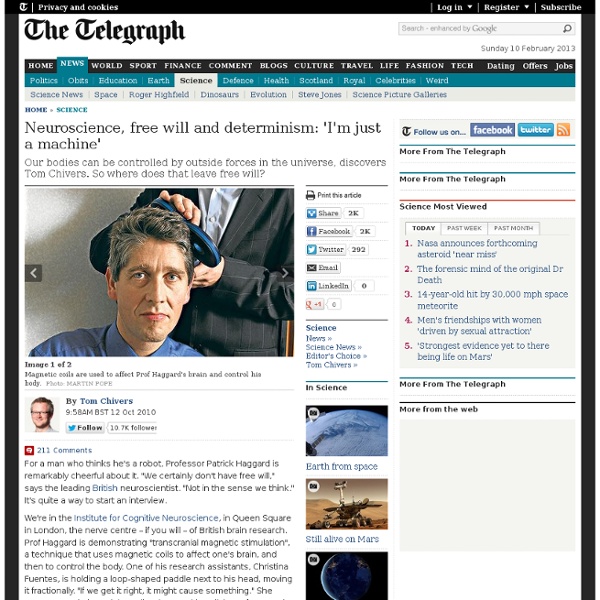 What does this mean in terms of free will? "We don't have free will, in the spiritual sense. What you're seeing is the last output stage of a machine. There are lots of things that happen before this stage – plans, goals, learning – and those are the reasons we do more interesting things than just waggle fingers. The conclusions are shocking: if we are part of the universe, and obey its laws, it's hard to see where free will comes into it. "If you see a light go green, it may mean press the accelerator; but there are lots of situations where it doesn't mean that: if the car in front hasn't moved, for example. Slowly, however, we are learning more about the details of that complexity. "What happens if someone commits a crime, and it turns out that there's a lesion in that brain area? This runs shockingly contrary to the sense of freedom that we feel in terms of controlling our actions, on which we base our whole sense of self and system of morality. Prof Haggard is dismissive.

fine line creativity and schizophrenia | Sc New research shows a possible explanation for the link between mental health and creativity. By studying receptors in the brain, researchers at the Swedish medical university Karolinska Institutet have managed to show that the dopamine system in healthy, highly creative people is similar in some respects to that seen in people with schizophrenia. High creative skills have been shown to be somewhat more common in people who have mental illness in the family. Creativity is also linked to a slightly higher risk of schizophrenia and bipolar disorder. "We have studied the brain and the dopamine D2 receptors, and have shown that the dopamine system of healthy, highly creative people is similar to that found in people with schizophrenia," says associate professor Fredrik Ullén from Karolinska Institutet's Department of Women's and Children's Health. "Thinking outside the box might be facilitated by having a somewhat less intact box," says Dr Ullén about his new findings.

Scientists extract images directly from brain ::: Pink Tentacle Researchers from Japan's ATR Computational Neuroscience Laboratories have developed new brain analysis technology that can reconstruct the images inside a person's mind and display them on a computer monitor, it was announced on December 11. According to the researchers, further development of the technology may soon make it possible to view other people's dreams while they sleep. The scientists were able to reconstruct various images viewed by a person by analyzing changes in their cerebral blood flow. Using a functional magnetic resonance imaging (fMRI) machine, the researchers first mapped the blood flow changes that occurred in the cerebral visual cortex as subjects viewed various images held in front of their eyes. Subjects were shown 400 random 10 x 10 pixel black-and-white images for a period of 12 seconds each. For now, the system is only able to reproduce simple black-and-white images. "These results are a breakthrough in terms of understanding brain activity," says Dr.

FUCK YEAH NERVOUS SYSTEM “Your worst enemy, he reflected, was your nervous system. At any moment the tension inside you was liable to translate itself into some visible symptom.” Magnetic Mind Control How Does the Brain Work? PBS Airdate: September 14, 2011 NEIL DEGRASSE TYSON: Hi, I'm Neil deGrasse Tyson, your host for NOVA scienceNOW, where this season, we're asking six big questions. To find out, I head to Las Vegas, where brain researchers are placing their bets on magic. MAC KING (Magician): That's a dang real fish. NEIL DEGRASSE TYSON: Some of the world's top magicians... PENN JILLETTE (Magician): Place the ball... NEIL DEGRASSE TYSON: ...are making the mysteries behind our most powerful organ disappear... I saw it go over! The illusionists reveal their secrets That motion will draw the eye ...giving us new insight into how our brain pays attention. STEPHEN MACKNIK (Barrow Neurological Institute): This would be a major contribution to science from the magicians. NEIL DEGRASSE TYSON: Also, a magnetic wand ... MO ROCCA (Correspondent): Oh! NEIL DEGRASSE TYSON: ... that can control your body,... MO ROCCA: Ooh, wow! NEIL DEGRASSE TYSON: ...and your speech... Keep your eye on the ball, son.

With an Artificial Memory Chip, Rats Can Remember and Forget At the Touch of a Button A new brain implant tested on rats restored lost memories at the flick of a switch, heralding a possible treatment method for patients with Alzheimer's disease, stroke or amnesia. Such a "neural prosthesis" could someday be used to facilitate the memory-forming process and help patients remember. The device can mimic the brain's own neural signals, thereby serving as a surrogate for a piece of the brain associated with forming memories. In the study, scientists at Wake Forest University and the University of Southern California trained rats to learn a task, pressing one lever after another to receive water. The team attached electrodes to the rats' brains, connected to two areas in the hippocampus, called CA1 and CA3. "The rats still showed that they knew 'when you press left first, then press right next time, and vice-versa,'" Berger said. Then, the team made an artificial hippocampus, which could duplicate the normal neural signals between the CA1 and CA3 regions.

Learn more quickly by transcranial magnetic brain stimulation, study in rats suggests What sounds like science fiction is actually possible: thanks to magnetic stimulation, the activity of certain brain nerve cells can be deliberately influenced. What happens in the brain in this context has been unclear up to now. Medical experts from Bochum under the leadership of Prof. Dr. The researchers have published their studies in the Journal of Neuroscience and in the European Journal of Neuroscience. Magnetic pulses stimulate the brain Transcranial magnetic stimulation (TMS) is a relatively new method of pain-free stimulation of cerebral nerve cells. Repeated stimuli change cerebral activity Since the mid-1990's, repetitive TMS has been used to make purposeful changes to the activability of nerve cells in the human cortex: "In general, the activity of the cells drops as a result of a low-frequency stimulation, i.e. with one magnetic pulse per second. Contact points between cells are strengthened or weakened Inhibitory cortical cells react particularly sensitive to stimulation

Transcranial magnetic stimulation Background[edit] Early attempts at stimulation of the brain using a magnetic field included those, in 1910, of Silvanus P. Thompson in London.[2] The principle of inductive brain stimulation with eddy currents has been noted since the 20th century. The first successful TMS study was performed in 1985 by Anthony Barker and his colleagues at the Royal Hallamshire Hospital in Sheffield, England.[3] Its earliest application demonstrated conduction of nerve impulses from the motor cortex to the spinal cord, stimulating muscle contractions in the hand. As compared to the previous method of transcranial stimulation proposed by Merton and Morton in 1980[4] in which direct electrical current was applied to the scalp, the use of electromagnets greatly reduced the discomfort of the procedure, and allowed mapping of the cerebral cortex and its connections. Theory[edit] From the Biot–Savart law it has been shown that a current through a wire generates a magnetic field around that wire. Risks[edit]

Neuroscience of magic NEW YORK — There is a place for magic in science. Five years ago, on a trip to Las Vegas, neuroscientists Stephen Macknik and Susana Martinez-Conde realized that a partnership was in order with a profession that has an older and more intuitive understanding of how the human brain works. Magicians, it seems, have an advantage over neuroscientists. "Scientists have only studied cognitive illusions for a few decades. She and Macknik, her husband, use illusions as a tool to study how the brain works. After their epiphany in Las Vegas, where they were preparing for a conference on consciousness, the duo, who both direct laboratories at the Barrow Neurological Institute in Arizona, teamed up with magicians to learn just how they harness the foibles of our brains. The psychological concepts behind illusions are generally better understood, but they treat the brain as something of a black box, without the insight into brain activity or anatomy that neuroscience can offer, they write.