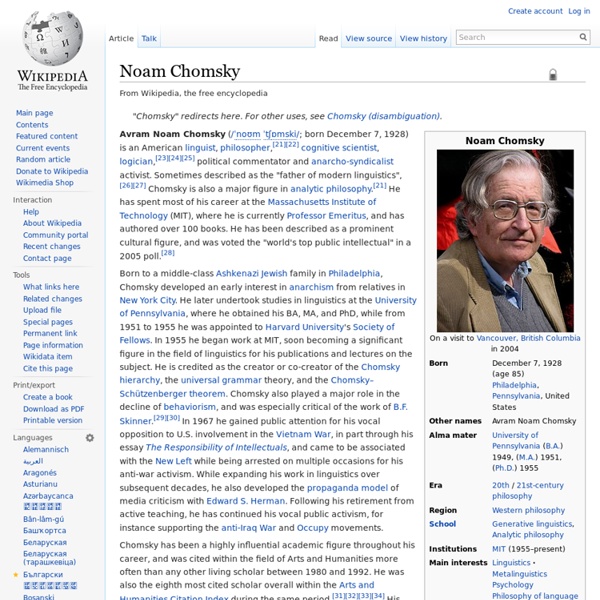 Avram Noam Chomsky (/ˈnoʊm ˈtʃɒmski/; born December 7, 1928) is an American linguist, philosopher,[21][22] cognitive scientist, logician,[23][24][25] political commentator and anarcho-syndicalist activist. Sometimes described as the "father of modern linguistics",[26][27] Chomsky is also a major figure in analytic philosophy.[21] He has spent most of his career at the Massachusetts Institute of Technology (MIT), where he is currently Professor Emeritus, and has authored over 100 books. He has been described as a prominent cultural figure, and was voted the "world's top public intellectual" in a 2005 poll.[28] Born to a middle-class Ashkenazi Jewish family in Philadelphia, Chomsky developed an early interest in anarchism from relatives in New York City. He later undertook studies in linguistics at the University of Pennsylvania, where he obtained his BA, MA, and PhD, while from 1951 to 1955 he was appointed to Harvard University's Society of Fellows. Early life Childhood: 1928–45 Related:  Social change advocates • The Story of Human Language

Medea Benjamin The Los Angeles Times has described her as "one of the high profile leaders" of the peace movement and in 1999, San Francisco Magazine included her on its "power list" of the "60 Players Who Rule the Bay Area." Early life[edit] Benjamin grew up on Long Island, New York, a self-described "nice Jewish girl Benjamin worked for 10 years as an economist and nutritionist in Latin America and Africa for the United Nations Food and Agriculture Organization, the World Health Organization, the Swedish International Development Agency, and the Institute for Food and Development Policy. Organizations[edit] She later went on to create the Occupation Watch Center in Baghdad (IOWC) to monitor the United States military and the war's effect on civilian populations. In 2010 she received the Martin Luther King, Jr. Politics[edit] Protest actions[edit] From 2002 to 2009, Benjamin engaged in numerous protests involving U.S. Organization efforts[edit] Labor rights and corporate responsibility[edit] Iraq[edit]

Universal grammar Universal grammar (UG) is a theory in linguistics, usually credited to Noam Chomsky, proposing that the ability to learn grammar is hard-wired into the brain.[1] The theory suggests that linguistic ability manifests itself without being taught (see the poverty of the stimulus argument), and that there are properties that all natural human languages share. It is a matter of observation and experimentation to determine precisely what abilities are innate and what properties are shared by all languages. Argument[edit] The theory of Universal Grammar proposes that if human beings are brought up under normal conditions (not conditions of extreme sensory deprivation), then they will always develop language with a certain property X (e.g., distinguishing nouns from verbs, or distinguishing function words from lexical words). There are theoretical senses of the term Universal Grammar as well (here capitalized). I.e. Relation to the evolution of language[edit] History[edit] Chomsky's theory[edit]

Frantz Fanon Frantz Fanon was one of a few extraordinary thinkers supporting the decolonization struggles occurring after World War II, and he remains among the most widely read and influential of these voices. His brief life was notable both for his whole-hearted engagement in the independence struggle the Algerian people waged against France and for his astute, passionate analyses of the human impulse towards freedom in the colonial context. His written works have become central texts in Africana thought, in large part because of their attention to the roles hybridity and creolization can play in forming humanist, anti-colonial cultures. Hybridity, in particular, is seen as a counter-hegemonic opposition to colonial practices, a non-assimilationist way of building connections across cultures that Africana scholar Paget Henry argues is constitutive of Africana political philosophy. Table of Contents 1. Frantz Fanon was born in the French colony of Martinique on July 20, 1925. 2. 3. 4. 5. 6. a. b.

Albert Einstein German-born scientist who developed the theory of relativity Albert Einstein ( EYEN-styne;[4] German: [ˈalbɛʁt ˈʔaɪnʃtaɪn] ( listen); 14 March 1879 – 18 April 1955) was a German-born theoretical physicist[5] who developed the theory of relativity, one of the two pillars of modern physics (alongside quantum mechanics).[3][6] His work is also known for its influence on the philosophy of science.[7][8] He is best known to the general public for his mass–energy equivalence formula E = mc2, which has been dubbed "the world's most famous equation".[9] He received the 1921 Nobel Prize in Physics "for his services to theoretical physics, and especially for his discovery of the law of the photoelectric effect",[10] a pivotal step in the development of quantum theory. The son of a salesman who later operated an electrochemical factory, Einstein was born in the German Empire, but moved to Switzerland in 1895, forsaking his German citizenship the following year. Life and career Marriages and children

Chris Hedges Christopher Lynn "Chris" Hedges (born September 18, 1956) is an American journalist specializing in American politics and society. Hedges is also known as the best-selling author of several books including War Is a Force That Gives Us Meaning (2002)—a finalist for the National Book Critics Circle Award for Nonfiction—Empire of Illusion: The End of Literacy and the Triumph of Spectacle (2009), Death of the Liberal Class (2010) and his most recent New York Times best seller, written with the cartoonist Joe Sacco, Days of Destruction, Days of Revolt (2012). Hedges is currently a columnist for news website Truthdig and a senior fellow at The Nation Institute in New York City.[1] He spent nearly two decades as a foreign correspondent in Central America, the Middle East, Africa and the Balkans. In 2002, Hedges was part of the team of reporters at The New York Times awarded the Pulitzer Prize for the paper's coverage of global terrorism. Biography[edit] Personal life[edit] New York Times[edit]

Poverty of the stimulus Linguistic argument Poverty of the stimulus (POS) is the controversial[1] argument from linguistics that children are not exposed to rich enough data within their linguistic environments to acquire every feature of their language. This is considered evidence contrary to the empiricist idea that language is learned solely through experience. The claim is that the sentences children hear while learning a language do not contain the information needed to develop a thorough understanding of the grammar of the language.[2] The POS is often used as evidence for universal grammar. There was much research based on generative grammar in language development during the latter half of the twentieth century. The form of the argument[edit] An argument from the poverty of the stimulus generally takes the following structure:[5][6][7] Background and history[edit] Chomsky coined the term "poverty of the stimulus" in 1980. Examples[edit] Syntax[edit] Binding theory – Principle C[edit] Passives[edit]

John Rawls - Wikipedia American political philosopher John Bordley Rawls (;[3] February 21, 1921 – November 24, 2002) was an American moral and political philosopher in the liberal tradition.[4][5] Rawls received both the Schock Prize for Logic and Philosophy and the National Humanities Medal in 1999, the latter presented by President Bill Clinton, in recognition of how Rawls's work "helped a whole generation of learned Americans revive their faith in democracy itself".[6] In 1990, Will Kymlicka wrote in his introduction to the field that "it is generally accepted that the recent rebirth of normative political philosophy began with the publication of John Rawls's A Theory of Justice in 1971. Rawls's theory of "justice as fairness" recommends equal basic rights, equality of opportunity and promoting the interests of the least advantaged members of society. Biography[edit] Early life[edit] Rawls was born in Baltimore, Maryland. Military service, 1943–46[edit] Academic career[edit] Later life[edit] Musical[edit]

Max Weber Maximilian Karl Emil Weber (;[6] German: [ˈveːbɐ]; 21 April 1864 – 14 June 1920) was a German sociologist, philosopher, jurist, and political economist. His ideas profoundly influenced social theory and social research.[7] Weber is often cited, with Émile Durkheim and Karl Marx, as among the three founders of sociology.[8][9][10][11][12] Weber was a key proponent of methodological anti-positivism, arguing for the study of social action through interpretive (rather than purely empiricist) means, based on understanding the purpose and meaning that individuals attach to their own actions. Unlike Durkheim, he did not believe in monocausal explanations and rather proposed that for any outcome there can be multiple causes.[13] Weber also made a variety of other contributions in economic history, as well as economic theory and methodology. Biography[edit] Early life and family background[edit] Weber Sr.' Max Weber and his brothers, Alfred and Karl, in 1879 Education[edit] Early work[edit]