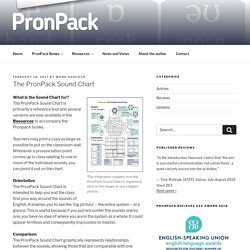 The PronPack Sound Chart is primarily a reference tool and several versions are now available in the Resources to accompany the Pronpack books. Teachers may print a copy as large as possible to put on the classroom wall. Whenever a pronunciation point comes up in class relating to one or more of the individual sounds, you can point it out on the chart. Orientation The PronPack Sound Chart is intended to help you and the class find your way around the sounds of English. It enables you to see the ‘big picture’ – the entire system – at a glance. Comparison The PronPack Sound Chart graphically represents relationships between the sounds, showing those that are comparable with one another and those which are very different. I designed this chart while teaching pronunciation classes at a language school in the North West of England. Most teachers of English will have come across a sound chart at some point, but few realise how arbitrary they are. 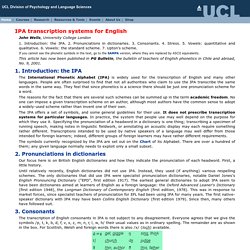 Pronunciations in dictionaries. 3. Consonants. 4. Stress. 5. Vowels: quantitative and qualitative. 6. Lauren Cooper and Doctor Who clash in class - Classic Comic Relief. The subtle sounds that English speakers have trouble catching. Cancer x can, sir. Funny Real Estate Interview - no asians - Double Bay Australia. Feel the beat: how rhythm shapes the way we use and understand language. Do you feel the rhythm? 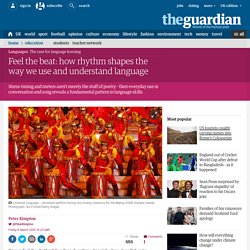 Or a French rythme, Spanish ritmo, Swedish rytm, Russian ритм (ritm) or Japanese rizumu? Is there a difference? Perhaps one way to find out is to have a French conversation, German konversation, Spanish conversación, or Italian conversatione? Doing so will of course reveal many differences, but languages of the world also share much, just as these words demonstrate. For millennia we have been singing, dancing, clapping, drumming and talking to a beat. An extensive 2010 Oxford University study comparing a series of rhythm algorithm measurements for English, French, Greek, Russian and Mandarin found – “surprisingly”, as the study itself expressed – that none of these languages could be separated, and that languages do not have dramatically different rhythms. A world of stress, a matter of meter A mother’s heartbeat may be the first rhythm most of us hear. 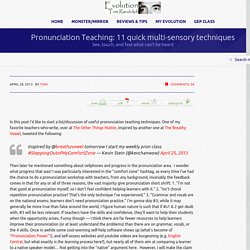 One of my favorite teachers-who-write, over at The Other Things Matter, inspired by another one at The Breathy Vowel, tweeted the following: Inspired by @breathyvowel tomorrow I start my weekly pron class. #SteppingOutofMyComfortZone — Kevin Stein (@kevchanwow) April 25, 2013 Then later he mentioned something about cellphones and progress in the pronunciation area. I wonder what progress that was? And that’s the problem with most of what’s out there — a great deal of it isn’t that different from “listen and repeat”. Before we get started, finally, let’s remember that anybody with a smartphone brings a mirror to class everyday… opportunities abound!

Update: the videos of segmental techniques posted here in response to reader comments were filmed during a CBI pronunciation workshop with pre-service and in-service teachers for whom English is a 2nd language. 21 Accents. The Magic E Song. Adele on The Graham Norton Show. Home page for British English Dictionary and Thesaurus. 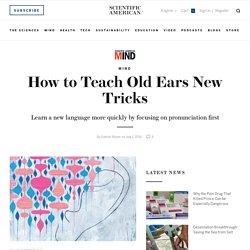 I'm Gabe. What's your name?” “Seung-heon. Nice to meet you, Gabe.” Uh-oh. “Sorry, I missed that. “Seung-heon.” This is bad. “Sung-hon?” “Seung-heon. I hate it when this happens. When we decide to do something rash like learn a foreign language, however, we run into difficulties. Why We Can't Learn Like Kids Most of us English speakers can't tell the difference between Seung, Seong and Sung now, but back when we were babies we could.

Some of the best data on this phenomenon come from studies of Japanese adults learning to hear the difference between r and l. When you were a baby, you learned to tell rocks from locks by listening to lots of auditory input. The researchers then tried something new. Many studies have subsequently confirmed that feedback is an essential ingredient in training our brain to hear new sounds, and when we can hear new sounds, we naturally start to produce them more accurately. Teaching the /r/–/l/ Discrimination to Japanese Adults: Behavioral and Neural Aspects. NPR : National Public Radio : News & Analysis, World, US, Music & Arts : NPR. Phonetics Focus - A Sound Choice. How to Improve Spoken American English - Sound like a Native Speaker. English: A Stress-Timed Language - American Pronunciation.