Why taking antioxidants during chemotherapy for breast cancer could be counterproductive. Canadians spend an estimated $3 billion a year on over-the-counter vitamin supplements. 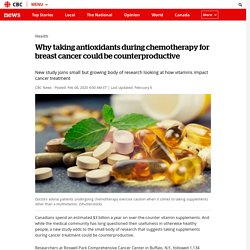 And while the medical community has long questioned their usefulness in otherwise healthy people, a new study adds to the small body of research that suggests taking supplements during cancer treatment could be counterproductive. Researchers at Roswell Park Comprehensive Cancer Center in Buffalo, N.Y., followed 1,134 breast cancer patients.

The six-year study was part of a Phase 3 clinical trial to determine the best dose and schedule for three chemotherapy drugs in high-risk, early-stage breast cancer. As part of the research, participants filled in surveys about their use of supplements before and during chemotherapy, as well as their lifestyle, diet and exercise habits. Among the 18 per cent who took vitamins like A, C or E, all of which are antioxidants, their risk of the cancer returning was 40 per cent higher than the participants who didn't take supplements. Untitled. The Hidden Costs of Medical Testing. A patient bursts into the hospital, upset, convinced she has ovarian cancer. 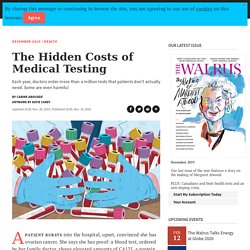 She says she has proof: a blood test, ordered by her family doctor, shows elevated amounts of CA125, a protein sometimes found on cancerous cells. But the emergency doctors learn that neither the patient nor her immediate family members have histories of ovarian cancer, which means she should never have undergone the test in the first place: it is not designed for the general population.

The patient had heard about the test and asked her own physician to perform it, just in case, setting off a chain of events that led her to the hospital. Rx for Doctors: Stop With the Urine Tests. Antibiotics affect the human microbiome, wiping out the protective microbes in the gastrointestinal tract and increasing people’s vulnerability to C. difficile, which the Centers for Disease Control and Prevention has called an “urgent threat.” 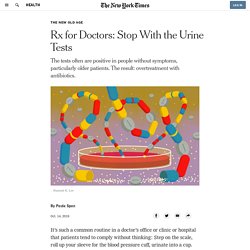 In the Michigan hospital study, patients treated for asymptomatic bacteriuria fared no better on a variety of measures than those who weren’t treated. “But they stayed in the hospital a day longer,” said Dr. Lindsay Petty, the study’s lead author and an infectious disease specialist at the University of Michigan. She theorized that their doctors were awaiting urine culture results. The patients, meanwhile, faced additional risks of disrupted sleep, infections, physical deconditioning from time spent in bed and other hazards, while generating needlessly higher hospital bills. DEFINE_ME. Methods Participants Trial Design Subjects were randomized by a study team member (double-blinded, parallel, 1:1 allocation in an “A-B-A-B” sequence) into 2 groups who received flour sachets labeled “A” or “B” to add to their diet twice daily for 2 weeks while otherwise continuing their GFD. 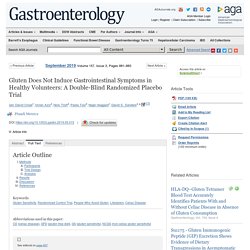 Do statins really work? Who benefits? Who has the power to cover up the side effects? Why It’s now time for a full public parliamentary inquiry into the controversial drug and fully expose the great cholesterol and statin con Earlier this week, the Chair of the British Parliament Science and Technology Committee, Sir Norman Lamb MP made calls for a full investigation into cholesterol lowering statin drugs. 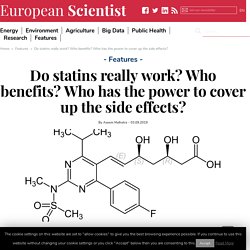 It was instigated after a letter was written to him signed by a number of eminent international doctors including the editor of the BMJ, the Past President of the Royal College of Physicians and the Director of the Centre of Evidence Based Medicine in Brazil wrote a letter calling for a full parliamentary inquiry into the controversial medication[1]. Bmj.f5577. Study Finds Hundreds of Medical Procedures To Be Ineffective. Before any medical product or procedure is adopted, it must undergo clinical trials to evaluate its effectiveness. 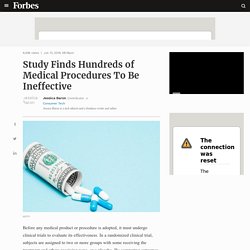 In a randomized clinical trial, subjects are assigned to two or more groups with some receiving the treatment and others receiving none, or a placebo. By comparing outcomes between the two groups, we should be able to see just how useful a treatment is. The subjects (and in the gold standard, the double-blind trial, the scientists as well) are not told which group they’ve been assigned to, theoretically ensuring that there is no bias in reporting about outcomes. The new truth about Aspirin, and your doctor’s slow uptake of medical evidence. This article was originally published on The Conversation, an independent and nonprofit source of news, analysis and commentary from academic experts. 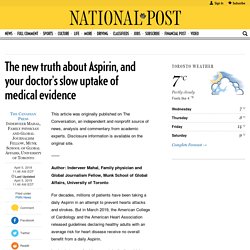 Disclosure information is available on the original site. Author: Inderveer Mahal, Family physician and Global Journalism Fellow, Munk School of Global Affairs, University of Toronto For decades, millions of patients have been taking a daily Aspirin in an attempt to prevent hearts attacks and strokes. But in March 2019, the American College of Cardiology and the American Heart Association released guidelines declaring healthy adults with an average risk for heart disease receive no overall benefit from a daily Aspirin.

Preventing heart disease requires more than medicine. Like more than half of older men, I take a cholesterol-lowering medication called a statin. 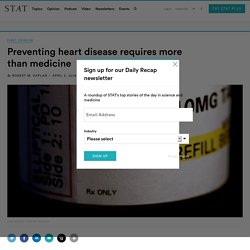 Sometimes that seems a bit strange, because I don’t have high cholesterol. My doctor prescribed it based on a formula that largely hinges on age and sex. I’m 71 and male. Those two factors alone put me in the high-risk category for having a heart attack or stroke in the next 10 years. Most men over age 60, and virtually all of them age 68 or older, fall into this category. You probably don’t have a penicillin allergy – Brighter World. Doctors Derek Chu, left, and David McCullagh of McMaster University. 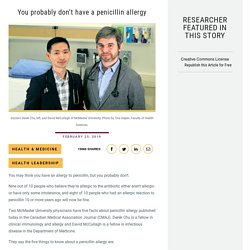 Photo by Tina Depko, Faculty of Health Sciences. February 25, 2019. Bing! Your heart is fibrillating: How Apple Watch’s new ECG app could create headaches for doctors. When Apple unveiled its latest Apple Watch, one feature in particular was hailed as a “game-changer” — an app that allows people to take their own ECG, or electrocardiogram, in 30 seconds flat, anytime, anywhere — “right from the wrist.” 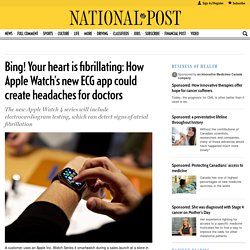 Apple called it the first over-the-counter ECG that can detect signs of an erratic heart rhythm. But observers say the watch could create a whole new level of anxiety for hypochondriacs, unnecessary testing and panicked visits to emergency. “The fear is we could end up with a lot of over treatment, over call and people waiting in emergency departments for no good reason,” said Dr. Samuel Vaillancourt of Toronto’s St. 'Aspirin-a-day risky in old age' - major study. Image copyright Getty Images Elderly people in good health should not take an aspirin a day, according to a major study in the US and Australia.

There are proven benefits of the drug for people after a heart attack or stroke. But the trial found no benefit for healthy people over the age of 70, and the pills increased the risk of potentially fatal internal bleeding. Why modern medicine is a major threat to public health. When former airline pilot Tony Royle came to see me last year to seek reassurance that it was OK to participate in an Ironman event, having stopped all his medications 18 months after suffering a heart attack, I was initially a little alarmed. But after talking to him, I realised he had made an informed decision to stop the medication after suffering side effects, and instead had opted for a diet and lifestyle approach to manage his heart disease. His case is a great example of how evidence-based medicine should be practised.

Screening: How overdiagnosis and other harms can undermine the benefits. When patients choose wisely: empowering patients with evidence to resist low-value care. Anneliese Synnot and David Synnot. Are Your Medications Making Your Life Worse? It happens for the best of reasons. Podcast: Emergency docs highlight toxic health care myths. Honey for cough in children: can it help? Honey for cough? Is it a helpful treatment for acute cough in children? The Hospitalist. Patients deserve the truth: health screening can do more harm than good. Why a one-off PSA test for prostate cancer is doing men more harm than good. The potential for blood tests that detect cancer is huge. America's Love Affair With Prescription Medication. We Should All Get to Know The NNT. Most vitamins are useless, but here are the ones you should take. Reuters It seems like simple, obvious advice: Eat your vegetables, get some exercise, and — of course — take your vitamins.

Why is it so hard to cure cancer? - Kyuson Yun. Doctors Significantly Better Than Google, According To New Research. Marijuana is not an all-purpose medical cure - CBC News. What A Doctor Calls A Condition Can Affect How We Decide To Treat It. Chronic back pain? Journalist investigates what works and what doesn't - Home. Sygdom søges. Tired of Science's Mumbo-Jumbo? Use the De-jargonizer! The scientists that I know are the most creative, innovative, detail oriented, critical thinkers around. How doctors are sparing patients from heart tests they don't need - Health. An echocardiogram, a common diagnostic test done on individuals such as this one in Los Angeles, may not always appropriately improve a patient's care.

Five commonly over-diagnosed conditions and what we can do about them. Today five influential Australian health-care organisations – representing professionals, the public and policy makers – have released a statement outlining that some medical conditions are being diagnosed too often, and calling for action to tackle over-diagnosis and the over-treatment it produces.

Commonly prescribed drugs for back pain often ineffective, review says - Health. Tame the Beast. The Truth about Mammograms — truTV.com. A comprehensive guide to the new science of treating lower back pain. Is 'watchful waiting' an option for breast cancer? Why you shouldn't exercise to lose weight, explained with 60+ studies. How to treat chronic pain without turning to opioids - The Globe and Mail. Pink eye needs 'to run its course,' say ophthalmologists advising against antibiotics - Health. The $100 Billion per year back pain industry is mostly a hoax, says investigative journalist Cathryn Jakobson Ramin — Quartz. Too many medical procedures on women aren’t necessary. Why overtreatment and overdiagnosis can be bad for your health. How to Question Your Doctor’s Advice. All These Cancer Screenings Probably Won’t Save Your Life. Pass the butter: Cutting saturated fat does not reduce heart disease risk, cardiologists say - Health.

Unnecessary care in Canada tops 1 million tests and treatments a year - Health. Read this before you get your knee replaced - Blog. Should I be undergoing any tests for my severe back pain? - The Globe and Mail. Type 2 diabetes not real illness says top doctor Muir Gray. Log In - New York Times. GP rebate: What I do for the $37.05 that no one wants to pay. The three questions that every patient should ask their doctor. This physician wants her patients to use fewer medications. Do non-antibiotic preventive treatments for urinary tract infections work? Our world is awash in bullshit health claims. These scientists want to train kids to spot them. MYTH: WHOLE-BODY SCREENING IS AN EFFECTIVE WAY TO DETECT HIDDEN CANCERS.

How Inconclusive Medical Tests Spiral Into Overtesting. Why mammograms haven’t cut cancer deaths, explained in 500 words. Drugs & The Media: Relative vs. Absolute Risk. There's a growing conversation in medicine that patients should know about. What are the biggest health myths. 9 Questions You Always Need to Ask Your Doctor. The Evidence Points to a Better Way to Fight Insomnia. How to reduce the risks of multiple medications in seniors. What are the odds that your medication will help you get better? Seven Hard Facts We All Need To Swallow About Antibiotics. These Four Things Could Cut U.S. Cancer Deaths In Half. More Medical Care Isn’t Always Better. We Don't Know If Cancer Screening Actually "Saves Lives", Experts Argue - BuzzFeed News. Misconceptions About Screening.