30 Singular Films to Watch in Quarantine. How to watch: Rent from various outlets Rat Film (2016, directed by Theo Anthony) Theo Anthony’s Rat Film is a journalistic work that doubles as a dreamy collage, a story of a city that incorporates tragedy, comedy, and grim legacy. 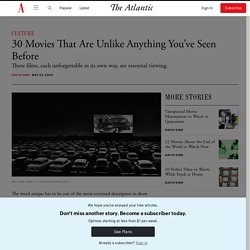 After a late-night encounter with a rodent stuck in his trash can, Anthony finds himself exploring Baltimore’s history of rat infestations, which ties into housing segregation, redlining, urban neglect, and the city’s long-lasting problems with systemic racism. Incorporating the perspectives of city officials, community activists, and neighbors, Anthony turns a nonfiction project into a portrait of the home he loves, full of praise and regret.

How to watch: Stream on Kanopy Right Now, Wrong Then (2015, directed by Hong Sang-soo) Your first encounter with the Korean filmmaker Hong Sang-soo is likely to be your most profound, since nobody makes movies like him. How to watch: Stream on Hoopla and Kanopy Scott Pilgrim vs. the World (2010, directed by Edgar Wright) Here Are 10 Directing Tips from David Fincher to Inspire You. TV and film director David Fincher is something of a legend in his field. 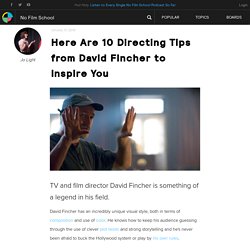 David Fincher has an incredibly unique visual style, both in terms of composition and use of color. He knows how to keep his audience guessing through the use of clever plot twists and strong storytelling and he's never been afraid to buck the Hollywood system or play by his own rules. Needless to say, aspiring directors can learn a great deal from Fincher. Here are just 10 of his most commonly mentioned or most unique tidbits of advice for those wanting to direct. 1. Fincher is perhaps best known for his Kubrickian tendency to ask for 50, 75, or even more takes on his movies, whatever it takes for him to get exactly what he wants. 2. ASC Unveils List of 100 Milestone Films in Cinematography of the 20th Century - The American Society of Cinematographers. Movie review: Vermilion. Dorthe Scheffmann's directorial debut celebrates female relationships and is a wonderfully thoughtful, deliberate film. 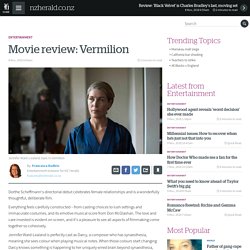 Everything feels carefully constructed – from casting choices to lush settings and immaculate costumes, and its emotive musical score from Don McGlashan. The love and care invested is evident on screen, and it's a pleasure to see all aspects of filmmaking come together so cohesively. Jennifer Ward-Lealand is perfectly cast as Darcy, a composer who has synaesthesia, meaning she sees colour when playing musical notes. When those colours start changing Darcy knows something is happening to her uniquely wired brain beyond synaesthesia, giving her reason to take stock of her life and relationships.

With daughter Zoe's (Emily Campbell) wedding approaching, Darcy throws herself into wedding planning as a means to mend their difficult relationship. - The Washington Post. Cinema Is Changing. Can TIFF Adapt? Every September, Toronto lives the dream. 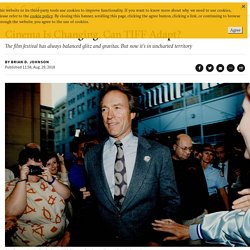 Red carpets are unrolled, fans stake out luxury hotels for a glimpse of a Hollywood star, and cinephiles line up around the block to watch movies from morning till midnight. In an annual ritual, the world’s film industry converges on the city for TIFF, an acronym so cemented into the media landscape it no longer needs spelling out. Full disclosure: I’ve been attending this festival forever. When I met my wife, in 1978, her close friends were running it. Soon, I worked the festival, loading a van with cans of celluloid and hauling them up to projection booths. Cinema’s two solitudes—mainstream movies and serious films—have never been more estranged, which endangers the pedigree fare that keeps the festival alive. As Hollywood abandons auteur directors, Amazon and Netflix are taking up some of the slack.

Meanwhile, TIFF itself is at a crossroads. The torch will be passed to artistic director Cameron Bailey. The Wonderful World of Wes Anderson. DALiM Nothing looks quite like Wes Anderson movies. 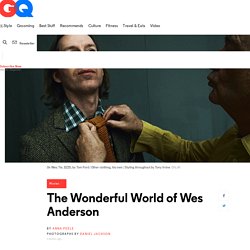 Even if they are often hilariously parodied, they’re never successfully imitated. Because the secret to Anderson’s work isn't in its meticulous set design or soundtrack: It’s the humor, warmth, and strangeness he brings out in his actors, even if it’s just in their voices. Denis Villeneuve, Sofia Coppola, and More Directors Pick Favorite Films of the 21st Century. Six high-profile directors shared their favorite films of the 21st century with the New York Times. 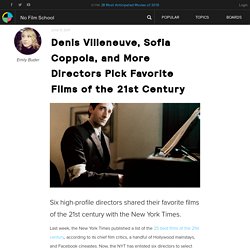 Last week, the New York Times published a list of the 25 best films of the 21st century, according to its chief film critics, a handful of Hollywood mainstays, and Facebook cineastes. Now, the NYT has enlisted six directors to select their favorite films of the 21st century. The directors—Antoine Fuqua, Sofia Coppola, Paul Feig, Denis Villeneuve, Brett Ratner, and Alex Gibney—chose highly personal films for their lists, though the selection process proved easier for some more than others. Gibney wrote, "I don’t like 10-best lists. How do you rank Spirited Away over Eastern Promises? "Apples and oranges. Though each director selected films that bore stylistic and thematic resemblances to his or her own work, there was quite a bit of overlap in the selections. See the full list here. I usually like more subtle movies but can enjoy all kinds. 1. 2. Christopher Nolan on Dunkirk. Christopher Nolan. Christopher Nolan.