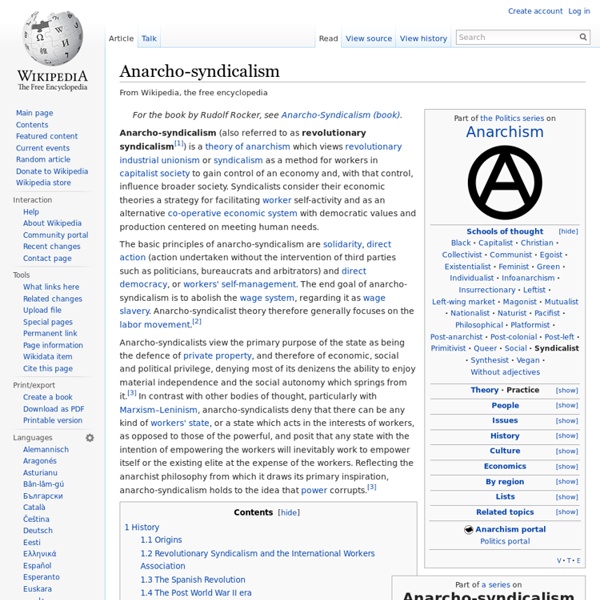 Anarcho-syndicalism (also referred to as revolutionary syndicalism[1]) is a theory of anarchism which views revolutionary industrial unionism or syndicalism as a method for workers in capitalist society to gain control of an economy and, with that control, influence broader society. Syndicalists consider their economic theories a strategy for facilitating worker self-activity and as an alternative co-operative economic system with democratic values and production centered on meeting human needs. The basic principles of anarcho-syndicalism are solidarity, direct action (action undertaken without the intervention of third parties such as politicians, bureaucrats and arbitrators) and direct democracy, or workers' self-management. The end goal of anarcho-syndicalism is to abolish the wage system, regarding it as wage slavery. Anarcho-syndicalist theory therefore generally focuses on the labor movement.[2] History Origins Revolutionary Syndicalism and the International Workers Association Film

Centrism In politics, centrism or the centre is a political outlook or specific position that involves acceptance or support of a balance of a degree of social equality and a degree of social hierarchy or social inequality; while opposing political changes which would result in a significant shift of society either strongly to the left or the right.[1] Centre left and centre right politics both involve a general association with centrism combined while leaning somewhat to their respective sides of the spectrum. Definitions[edit] Voters may identify with moderation for a number of reasons: pragmatic, ideological or otherwise. Central Organisation of the Workers of Sweden Central Organisation of the Workers of Sweden (in Swedish: Sveriges Arbetares Centralorganisation) is a syndicalist trade union federation in Sweden. Unlike other Swedish unions, SAC organizes people from all occupations, including the unemployed, students, and the retired.[1] SAC also publishes the weekly newspaper Arbetaren ("the Worker"), owns the publishing house Federativs and runs the unemployment fund Sveriges Arbetares Arbetslöshetskassa (SAAK). Its long-term goal is to realize libertarian socialism, a society without classes and hierarchies, where the means of production are owned commonly and administrated by the workers: in effect, abolition of capitalism, wage slavery, and sexism. SAC has thus decided to declare itself to be anti-sexist, anti-militarist, and, as the first trade union in Sweden, feminist (1998).

Anarcho-naturism Anarcho-naturism (also anarchist naturism and naturist anarchism) appeared in the late 19th century as the union of anarchist and naturist philosophies.[1][2][3][4] Mainly it had importance within individualist anarchist circles[5][6][7][8] in Spain,[2][3][9][10] France,[9][11] Portugal.[12] and Cuba.[10][13] Anarcho-naturism advocates vegetarianism, free love, nudism, hiking and an ecological world view within anarchist groups and outside them.[2][8] Anarcho-naturism also promotes an ecological worldview, small ecovillages, and most prominently nudism as a way to avoid the artificiality of the industrial mass society of modernity.[2] Naturist individualist anarchists see the individual in their biological, physical and psychological aspects and tried to eliminate social determinations.[14] History[edit]

Rudolf Rocker Johann Rudolf Rocker (March 25, 1873 – September 19, 1958) was an anarchist writer and activist. Though often described as an anarcho-syndicalist, he was a self-professed anarchist without adjectives, believing that anarchist schools of thought represented "only different methods of economy" and that the first objective for anarchists was "to secure the personal and social freedom of men". Early life[edit] Rudolf Rocker was born to the lithographer Georg Philipp Rocker (1845-1877)[2] and his wife Anna Margaretha née Naumann (1869-1887, daughter of Heinrich Naumann)[3] as one of their four children, in Mainz, Hesse (now Rhineland-Palatinate), Germany, on March 25, 1873.

Economism Economism is reduction of all social facts to economic dimensions. The term is often used to criticize economics as an ideology, in which supply and demand are the only important factors in decisions, and outstrip or permit ignoring all other factors. It is believed to be a side effect of neoclassical economics and blind faith in an "invisible hand" or "laissez-faire" means of making decisions, extended far beyond controlled and regulated markets, and used to make political and military decisions. Conventional ethics would play no role in decisions under pure economism, except insofar as supply would be withheld, demand curtailed, by moral choices of individuals.

Black swan theory The black swan theory or theory of black swan events is a metaphor that describes an event that comes as a surprise, has a major effect, and is often inappropriately rationalized after the fact with the benefit of hindsight. The theory was developed by Nassim Nicholas Taleb to explain: The disproportionate role of high-profile, hard-to-predict, and rare events that are beyond the realm of normal expectations in history, science, finance, and technology.The non-computability of the probability of the consequential rare events using scientific methods (owing to the very nature of small probabilities).The psychological biases that blind people, individually and collectively, to uncertainty and to a rare event's massive role in historical affairs. Unlike the earlier philosophical "black swan problem", the "black swan theory" refers only to unexpected events of large magnitude and consequence and their dominant role in history.

Élisée Reclus Élisée Reclus (French: [ʁəkly]; 15 March 1830 – 4 July 1905), also known as Jacques Élisée Reclus, was a renowned French geographer, writer and anarchist. He produced his 19-volume masterwork La Nouvelle Géographie universelle, la terre et les hommes ("Universal Geography"), over a period of nearly 20 years (1875–1894). In 1892 he was awarded the prestigious Gold Medal of the Paris Geographical Society for this work, despite his having been banished from France because of his political activism.