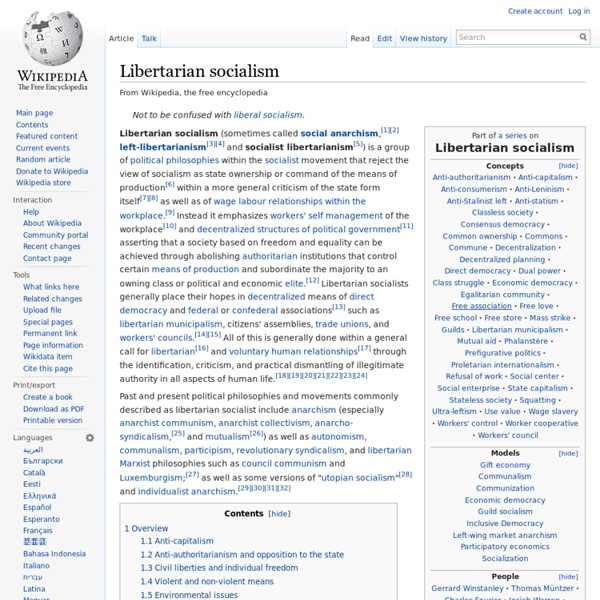 Overview[edit] Libertarian socialism is a Western philosophy with diverse interpretations, though some general commonalities can be found in its many incarnations. Its proponents generally advocate a worker-oriented system of production and organization in the workplace that in some aspects radically departs from neoclassical economics in favor of democratic cooperatives or common ownership of the means of production (socialism).[33] They propose that this economic system be executed in a manner that attempts to maximize the liberty of individuals and minimize concentration of power or authority (libertarianism). August 17, 1860 edition of libertarian Communist publication Le Libertaire edited by Joseph Déjacque. In a chapter recounting the history of libertarian socialism, economist Robin Hahnel relates that thus far the period where libertarian socialism has had its greatest impact was at the end of the 19th century through the first four decades of the twentieth century. Anarchism[edit]

libertyandsocialism.org (HTTP) Henry David Thoreau - Wikipedia, the free encyclopedia - en.wikipedia.org (HTTP) Henry David Thoreau (/θəˈroʊ, ˈθɔroʊ, ˈθoʊroʊ/; July 12, 1817 – May 6, 1862) was an American author, poet, philosopher, abolitionist, naturalist, tax resister, development critic, surveyor, historian, and leading transcendentalist.[2] He is best known for his book Walden, a reflection upon simple living in natural surroundings, and his essay Resistance to Civil Government (also known as Civil Disobedience), an argument for disobedience to an unjust state. Thoreau's books, articles, essays, journals, and poetry total over 20 volumes. Among his lasting contributions are his writings on natural history and philosophy, where he anticipated the methods and findings of ecology and environmental history, two sources of modern-day environmentalism. Name pronunciation and physical appearance[edit] In appearance he was homely, with a nose that he called "my most prominent feature Life[edit] Early life and education, 1817–1836[edit] Return to Concord, 1836–1842[edit] Map of Thoreau sites at Walden Pond

Anarcho-pacifism - Wikipedia, the free encyclopedia - en.wikipedia.org (HTTP) Anarcho-pacifism (also pacifist anarchism or anarchist pacifism) is a tendency within the anarchist movement which rejects the use of violence in the struggle for social change.[1][2] The main early influences were the thought of Henry David Thoreau[2] and Leo Tolstoy while later the ideas of Mohandas Gandhi gained importance.[1][2] It developed "mostly in Holland, Britain, and the United States, before and during the Second World War".[3] History[edit] Violence has always been controversial in anarchism. Bart de Ligt, influential Dutch anarcho-pacifist writer of the theoretical work The Conquest of Violence Among the works on anarchism by Comfort is Peace and Disobedience (1946), one of many pamphlets he wrote for Peace News and the Peace Pledge Union, and Authority and Delinquency in the Modern State (1950).[12] He exchanged public correspondence with George Orwell defending pacifism in the open letter/poem "Letter to an American Visitor" under the pseudonym "Obadiah Hornbrooke