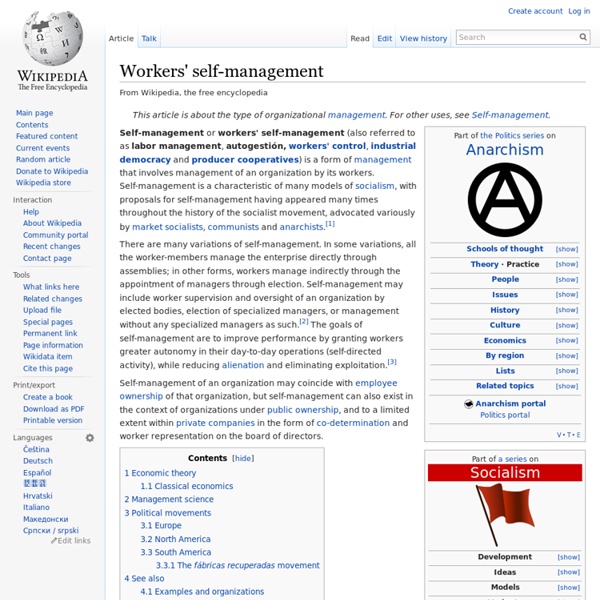 Self-management or workers' self-management (also referred to as labor management, autogestión, workers' control, industrial democracy and producer cooperatives) is a form of management that involves management of an organization by its workers. Self-management is a characteristic of many models of socialism, with proposals for self-management having appeared many times throughout the history of the socialist movement, advocated variously by market socialists, communists and anarchists.[1] There are many variations of self-management. In some variations, all the worker-members manage the enterprise directly through assemblies; in other forms, workers manage indirectly through the appointment of managers through election. Economic theory[edit] An economic system consisting of self-managed enterprises is sometimes referred to as a participatory economy, self-managed economy or cooperative economy. Classical economics[edit] Management science[edit] Political movements[edit] Europe[edit] Related:  Worker Owned Companies • political • Fábricas Ocupadas

Mondragon Corporation Mondragon cooperatives operate in accordance with Statement on the Co-operative Identity maintained by the International Co-operative Alliance. History[edit] The determining factor in the creation of the Mondragon system was the arrival in 1941 of a young Catholic priest José María Arizmendiarrieta in Mondragón, a town with a population of 7,000 that had not yet recovered from the Spanish Civil War: poverty, hunger, exile and tension.[2] In 1943, Arizmendiarrieta established a technical college that became a training ground for generations of managers, engineers and skilled labour for local companies, and primarily for the co-operatives.[3] Before creating the first co-operative, Arizmendiarrieta spent a number of years educating young people about a form of humanism based on solidarity and participation, in harmony with Catholic Social Teaching, and the importance of acquiring the necessary technical knowledge. The first 15 years were characterised by enormous dynamism. Finance[edit]

Participatory economics Albert and Hahnel stress that parecon is only meant to address an alternative economic theory and must be accompanied by equally important alternative visions in the fields of politics, culture and kinship. The authors have also discussed elements of anarchism in the field of politics, polyculturalism in the field of culture, and feminism in the field of family and gender relations as being possible foundations for future alternative visions in these other spheres of society. Stephen R. Shalom has begun work on a participatory political vision he calls "par polity". Both systems together make up the political philosophy of Participism. Decision-making principle[edit] One of the primary propositions of parecon is that all persons should have a say in decisions proportionate to the degree to which they are affected by them. Work in a participatory economy[edit] Balanced job complexes[edit] Compensation for effort and sacrifice[edit] Allocation in a participatory economy[edit] Criticisms[edit]

Surplus economics Surplus economics is the study of economics based upon the concept that economies operate on the basis of the production of a surplus over basic needs. Economic Surplus[edit] By economic surplus is meant all production which is not essential for the continuance of existence. That is to say, all production about which there is a choice as to whether or not it is produced. Alternative definitions are: The difference between the value of a society's annual product and its socially necessary cost of production. See also[edit] References[edit] Monopoly capital: an essay on the American economic and social order, Paul A. Further reading[edit]

Evergreen Cooperatives The Evergreen Cooperatives are a connected group of worker-owned cooperatives in Cleveland, Ohio. They are committed to local, worker-owned job creation; sustainable, green and democratic workplaces; and community economic development. Overview[edit] Background[edit] Much of the idea of worker control came in 1977 Youngstown, Ohio when the Youngstown Sheet and Tube company abruptly closed and laid off 5,000 workers.[1] In an effort to stop the layoffs, the workers and city attempted to buy a steel mill and control it themselves. Worker-Owned Cooperatives[edit] Evergreen Cooperative Laundry[edit] Evergreen Cooperative Laundry (ECL) is an industrial laundry serving local hospitals, hotels, and other institutions. It saves 35% of energy by warming up the clean water with heat from the used water.[9][10]It eliminates hazardous waste by using EPA-approved chemicals.[9] Employees are paid $8 an hour first six months, while they are on a trial period. Ohio Cooperative Solar[edit] References[edit]

List of employee-owned companies List of employee-owned companies From Wikipedia, the free encyclopedia Jump to: navigation, search This list is incomplete; you can help by expanding it. This is a list of notable employee-owned companies. External links[edit] Retrieved from " Categories: Hidden categories: Navigation menu Personal tools Namespaces Variants Views Actions Navigation Interaction Tools Print/export Languages Edit links This page was last modified on 17 April 2014 at 17:52. Georgism Georgist ideas were popular and influential in the earlier part of the 20th century.[13] Political parties, institutions and communities were founded based on Georgist principles during that time. Early followers of George's philosophy called themselves Single Taxers, associated with the idea raising public revenue exclusively from land and privileges, but the term is considered a misnomer because Georgists do not consider their proposals to be true taxes and they usually support multiple funding mechanisms. In classical and Georgist economics, the term 'land' is defined as all locations, natural opportunities, resources, physical forces, and government privileges over economic domains, which is closely related to the concept of commons.[14] Georgism was coined later, and some prefer the term geoism or geonomics to distinguish their beliefs from those of Henry George.[15] instead.[16] Main tenets[edit] In Progress and Poverty George argued: "We must make land common property. Richard T.