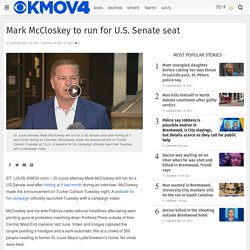 LOUIS (KMOV.com) -- St. Louis attorney Mark McCloskey will run for a US Senate seat after hinting at it last month during an interview. McCloskey made the announcement on Tucker Carlson Tuesday night. A website for his campaign officially launched Tuesday with a campaign video. Untitled. Ocasio-Cortez speaks about Marjorie Taylor Greene confrontation. What to know about the hundreds of suspects arrested since the Capitol riot on Jan. 6 - Washington Post. Do You Think You Can Tell How a Neighborhood Voted Just by Looking Around? Vaccinations by Group. Untitled. The report, released by Director of National Intelligence Avril Haines, finds that Moscow sought to inject misleading information about Biden into the campaign through officials and others close to Trump. 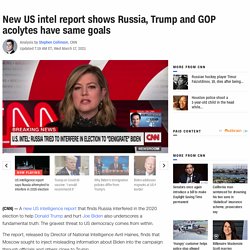 The real bombshell it contains is not the confidence of the spy agencies that Russia hoped to subvert American democracy. It is that US intelligence experts effectively confirmed that for the second election in a row, Trump acolytes repeatedly used, knowingly or otherwise, misinformation produced by the spies of one of America's most sworn foreign adversaries to try to win a US election. And given the advantage of hindsight, the latest intelligence assessment is not just an isolated example of incriminating evidence against Russia and its efforts to create chaos and discord within the United States. Untitled. Are charged with conspiracy crimes or assault Daniel Page Adams Goodrich, Texas Interference with law enforcement. 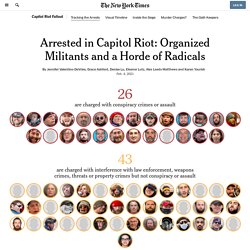 Untitled. Whatever “identity politics” means, its pervasive influence requires an initial declaration: I am opposed to racism, sexism, imperialism, improper sexual intolerance, improper cultural intolerance, and improper classism (probably left something out of the catechism). 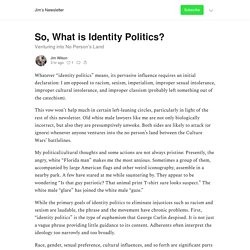 This vow won’t help much in certain left-leaning circles, particularly in light of the rest of this newsletter. Old white male lawyers like me are not only biologically incorrect, but also they are presumptively unwoke. Both sides are likely to attack (or ignore) whenever anyone ventures into the no person’s land between the Culture Wars’ battlelines. January 16, 2021 - Letters from an American.

Since right-wing insurrectionists stormed the Capitol on January 6 with the vague but violent idea of taking over the government, observers are paying renewed attention to the threat of right-wing violence in our midst. 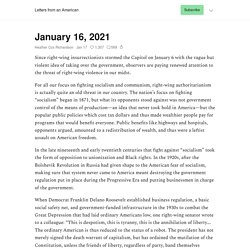 For all our focus on fighting socialism and communism, right-wing authoritarianism is actually quite an old threat in our country. The nation’s focus on fighting “socialism” began in 1871, but what its opponents stood against was not government control of the means of production—an idea that never took hold in America—but the popular public policies which cost tax dollars and thus made wealthier people pay for programs that would benefit everyone. Untitled. But when he arrived in D.C. on Jan. 4 ahead of the scheduled demonstrations, he said, “15 cop cars” swarmed his Honda Crosstour soon after he passed through the Third Street Tunnel. 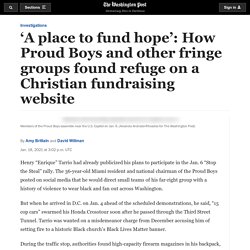 Tarrio was wanted on a misdemeanor charge from December accusing him of setting fire to a historic Black church’s Black Lives Matter banner. During the traffic stop, authorities found high-capacity firearm magazines in his backpack, resulting in felony weapons charges, according to court records. And as he sat in a jail cell for 24 hours, Tarrio said, he thought about how he would need a lot of money to get out of this mess. Good lawyers, he said, don’t come cheap. QAnon's 'Meme Queen' Marches On. Despite these delusions, Ms. 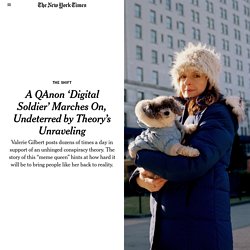 Gilbert — a self-described mystic who has written four books, with titles like “Swami Soup” — mostly struck me as a New Age eccentric who could use some time away from screens. She disdains the mainstream media, but she agreed to be profiled, and we kept in touch. Over a series of conversations, I learned that she had a longstanding suspicion of elites dating back to her Harvard days, when she felt out of place among people she considered snobby rich kids. As an adult, she joined the anti-establishment left, advocating animal rights and supporting the Standing Rock oil pipeline protests.

Untitled. QAnon conspiracists were in the vanguard of the violent attack on the Capitol; Ashli Babbitt, who was killed in the assault, was a follower.

QAnon sees Democrats not as a political party, but as a cabal of Satan-worshiping pedophiles who will be vanquished in a holy war. Antonio French: The insurrection and the devalued currency of whiteness. Seventy-four million people voted for Trump in 2020, nearly 12 million more than in 2016. 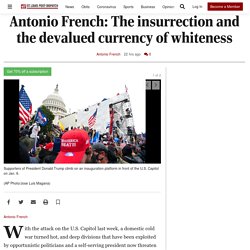 It was the second-most votes for president in history, behind only Biden and his 81 million. And while I think it’s unfair to label every Trump voter a racist, I do think it’s fair to say that for those who don’t share Trump’s racist worldview, that view and its denial of the history and harm of systemic racism clearly wasn’t a deal breaker. Race played a large part both in Trump’s political rise and the deadly attack in Washington last week. House Speaker Nancy Pelosi said the insurrectionists had “chosen their whiteness over democracy.” Whiteness in America has meant different things over the centuries. Untitled. House Speaker Nancy Pelosi (D-Calif.) issued an ultimatum to Vice President Mike Pence on Monday: Initiate a 25th Amendment process to relieve President Trump of power, or the House will vote to impeach. 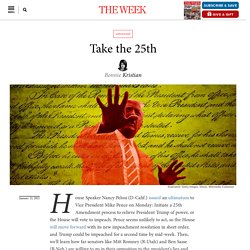 Pence seems unlikely to act, so the House will move forward with its new impeachment resolution in short order, and Trump could be impeached for a second time by mid-week. Then, we'll learn how far senators like Mitt Romney (R-Utah) and Ben Sasse (R-Neb.) are willing to go in their opposition to the president's lies and abuses of power. Untitled. “It was amazing to get to see the president talk,” Babbitt said, beaming in a video she streamed on Facebook early Wednesday afternoon that was later published by TMZ. “We are now walking down the inaugural path to the Capitol building. Three million-plus people.” Untitled. Untitled. Untitled. This ecosystem, Rauch wrote, operates as a funnel. It allows a wide volume of ideas to get floated, but only a narrow group of ideas survive collective scrutiny.

Untitled. Untitled. Untitled. For the next several hours, hundreds and hundreds of people who attended the rally were stranded, as a chaotic scene unfolded on dark roads on a remote stretch near the Omaha airport. They waited for buses that didn't arrive, unable to reach the site because of a clogged two-lane road. Many people started walking to their cars, parked three or four miles away, which blocked the roads even further. Several medics were seen by CNN giving attention to people in the bone-chilling evening air. The temperature was right at freezing, but wind chills were far lower.

Earlier in the night, the President commented on the weather. Untitled. Jesse Millan. Via Flickr. In the 2018 midterms, new and young progressive candidates across the country ran enthusiastic campaigns on change and reform, resulting in election wins. New York, Massachusetts, Minnesota, California, and New Mexico had notable wins for progressives as candidates beat centrist Democrats in their primaries or Republican challengers in general elections. Some of these candidates are pushing for major reforms on climate change, foreign policy, and education before they are officially in Congress—and are already holding policy talks on climate change, social reform, and economic development.

This early action forces both Republicans and Democrats to debate topics that have long been off the table. Appalachia Watches COVID-19, Race Issues From Afar. “We must abolish human poverty,” Johnson proclaimed, foreshadowing a torrent of federal programs that would eventually include Medicare, Head Start preschool, environmental laws and a push for equal justice. Untitled. Untitled. Untitled. The baseless conspiracy theory is set to air on stations across the country in a segment during the program "America This Week" hosted by Eric Bolling. The show, which is posted online before it is broadcast over the weekend, is distributed to Sinclair Broadcast Group's network of local television stations, one of the largest in the country.

Untitled. Untitled. Untitled. Fox News under fire for stock market graphic. If Trump Is Down In The Polls, Why Do So Many Americans Think He’ll Win? Untitled. Untitled. Here's what the Georgia Republican senator said on Fox News Friday: "This was a political attack designed to take away from the issue at hand. Untitled. Untitled. The desire to matter and feel significant among Donald Trump supporters is associated with support for hostile and vindictive actions against the president’s political rivals, according to new research published in the journal Political Psychology.

In a series of studies conducted immediately before and after the 2016 election in the United States, the researchers examined how the quest for personal significance was related to confrontational intergroup behaviors. “Our team studies what motivates people to support and engage in radical political actions. In the past we focused on actions — both peaceful and violent — that were aimed against the political system such as protesting, donating money for a cause, or using politically motivated violence,” explained study author Katarzyna Jaśko, an associate professor at Jagiellonian University in Poland.

The researchers then repeated the study with another 217 Trump voters and 261 Clinton voters a week after the 2016 election. Untitled. Democracy Grief Is Real. America’s Red State Death Trip. Poll leaves CNN's John King speechless. God's gift to America? Welcome to the Fractured States of America - CNN.com. Cuomo calls out Kavanaugh for denied handshake. Untitled. - The Washington Post. Over Trump, We’re as Divided as Ever. Liberals Don’t Share or Believe Fake News As Much As Right-Wingers, Study Finds. Roy Moore's incredible 'even though we had slavery' quote - CNNPolitics.

Liberals Need to Take Their Fingers Out of Their Ears. In Trump country, a university confronts its skeptics. Poll finds Trump’s standing weakened since springtime. Berkeley author George Lakoff says, 'Don't underestimate Trump' — Berkeleyside. Eric Trump: Dems aren't even people. How a ‘shadow’ universe of charities joined with political warriors to fuel Trump’s rise. These Republicans didn't like Trump at first. They do now. Welcome to conservative Liberal, Mo. Equality of Opportunity. Text Young adults compared to their parents wages.

Young adults compared to their parents wages. How Trump and the GOP will try to turn the entire country into Dixie. The Daily 202: Trump over performed the most in counties with the highest drug, alcohol and suicide mortality rates.