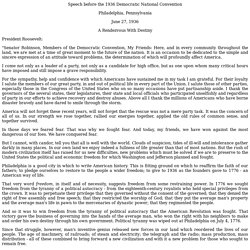 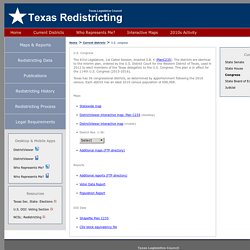 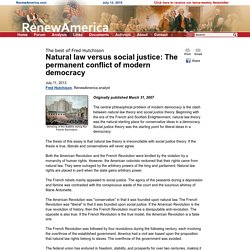 Beginning with the era of the French and Scottish Enlightenment, natural law theory was the natural starting place for conservative ideas in a democracy. Social justice theory was the starting point for liberal ideas in a democracy. The thesis of this essay is that natural law theory is irreconcilable with social justice theory. Both the American Revolution and the French Revolution were kindled by the violation by a monarchy of human rights. The French rebels mainly appealed to social justice. The American Revolution was "conservative" in that it was founded upon natural law. The French Revolution was followed by four revolutions during the following century, each involving the overthrow of the established government. 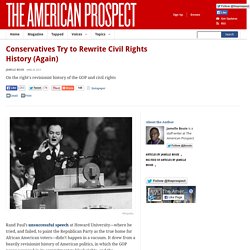 It drew from a heavily revisionist history of American politics, in which the GOP never wavered in its commitment to black rights, and the Democratic Party embraced its role as a haven for segregationists. In this telling of history, black support for Democrats is a function of liberal demagoguery and crude identity politics. If African Americans truly understood their interests, the argument goes, they’d have never left the Republican Party.

Conservative writer Kevin Williamson offered a version of this history in a large feature for the National Review last year, and this week, he’s back with a smaller take—highlighting Barry Goldwater’s contributions to a local civil rights fight in Arizona—that comes to the same conclusion: Democrats were never on the right side of civil rights. Comments -dlj. Political ignorance around the world. An interesting recent study by Ipsos MORI provides new evidence that political ignorance is a serious problem in many democracies, not just the United States. 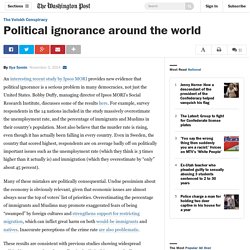 Bobby Duffy, managing director of Ipsos MORI’s Social Research Institute, discusses some of the results here. For example, survey respondents in the 14 nations included in the study massively overestimate the unemployment rate, and the percentage of immigrants and Muslims in their country’s population. Most also believe that the murder rate is rising, even though it has actually been falling in every country. Even in Sweden, the country that scored highest, respondents are on average badly off on politically important issues such as the unemployment rate (which they think is 3 times higher than it actually is) and immigration (which they overestimate by “only” about 45 percent). Many of these mistakes are politically consequential. I do disagree with Duffy’s analysis of the results on one point.

Britons aren’t uniquely ignorant, most countries have got their facts wrong. We know from past surveys that people in Britain are wildly wrong on many basic facts about our population. 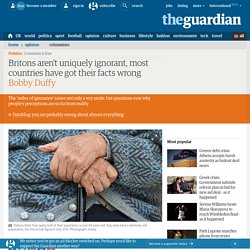 The average person has a pretty poor understanding of things like what proportion of the population are immigrants or Muslims, what percentage of teenage girls get pregnant each year and how the government spends our money. But are we uniquely ignorant in Britain? It turns out that people in other countries are just as wrong – in fact, often much more so than the British. Americans think that a quarter of US teenage girls give birth each year – when it is actually 3%. The US is also one of the countries that are furthest from reality on the extent of immigration, with an average guess of 31%, when the actual proportion is 13%.

The French think 30% of the population are Muslims, when the real figure is 8%. Incredibly, Italians think that nearly half of their population is over 65 years old. So what’s going on – why are perceptions so far from reality? Pa525.pdf. Vol31_No1_Georgeonline.pdf.