It turns out Rand Paul was right about guns being smuggled out of Benghazi to Syria. Basic Moral Theories Essentialized - The Objective Standard. [Click for a PDF of the full chart] Human action, whether by individuals, groups, or governments, is driven by ideas—most substantially by the ideas people accept as morally correct. 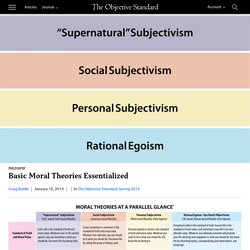 Why did Rosa Parks refuse to give up her bus seat to a white passenger? Why did Edward Snowden release classified NSA documents to the media? Why did Muslims hijack passenger jets and fly them into buildings full of Americans? Why did Congress pass ObamaCare into law? The broad answer to such questions is that the individuals, groups, or governments did what they did because they regarded the actions as morally right. People act (for the most part) on their moral convictions, whether explicit or implicit, pure or mixed; thus, if we want to understand why individuals, groups, and governments do what they do, we need to understand the key elements of the moral codes that motivate them. Such a highly delimited chart is obviously no substitute for a deep and broad understanding of these issues.

Related: Related: Taxpayers Give Big Banks Over $80 Billion Yearly. Kasey Caldwell - Kasey Caldwell a partagé la photo de... In politics, most Americans feel they’re on the losing side. It could be a sign of the times – or something more lasting – but far more Americans today feel like their side is losing more often than winning in politics. 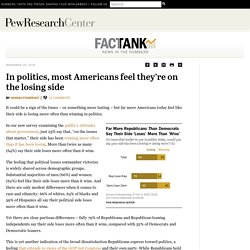 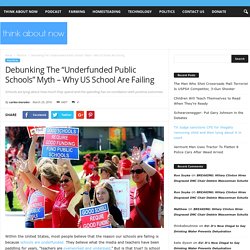 They believe what the media and teachers have been peddling for years, “teachers are overworked and underpaid.” But is that true? Is school performance directly correlated with per student spending? Trying to track down the real cost A difficult aspect of answering this question is that public school officials constantly lie about how much money their getting in. That same discrepancy was found in every other state checked. Public K–12 education consumes a larger chunk of each state and local taxpayer dollar than any other expense. Alright, it costs a lot, but isn’t it worth it?

By Sable Levy In case you didn’t know it, the ultra-rich are widely vilified—particularly within movements such as Occupy Wall Street and the political campaign of Bernie Sanders, which has captured the hearts of many a burgeoning millennial. 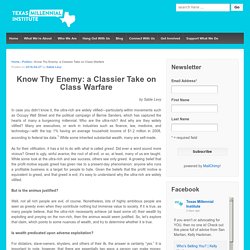 Who are the ultra-rich? And why are they widely vilified? Many are executives, or work in industries such as finance, law, medicine, and technology—with the top 1% having an average household income of $1.2 million in 2008, according to federal tax data.⁠1 While some inherited substantial wealth, many are self-made. As for their vilification, it has a lot to do with what is called greed. But is the animus justified? Well, not all rich people are evil, of course. Is wealth predicated upon adverse exploitation? For dictators, slave-owners, shysters, and others of their ilk, the answer is certainly “yes.”