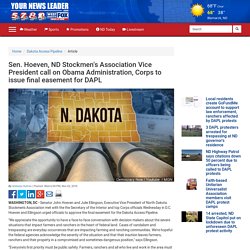 ND's congressional delegation chimes in with their opinions of DAPL protest. BISMARCK, ND - After last week’s Dakota Access Pipeline protests, many were left with questions about if this situation would ever come to an end. 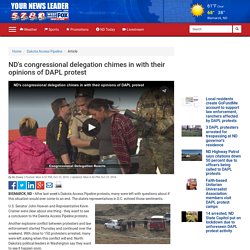 The state's representatives in D.C. echoed those sentiments. U.S. Senator John Hoeven and Representative Kevin Cramer were clear about one thing - they want to see a conclusion to the Dakota Access Pipeline protests. Another explosive conflict between protesters and law enforcement started Thursday and continued over the weekend. With close to 150 protesters arrested, many were left asking when this conflict will end. "It's about law enforcement, it's about keeping people safe, and we need to get the situation resolved," Sen. Congressman Kevin Cramer says federal agencies are at fault. "The federal government shirked its responsibilities when it withdrew a permit they'd already legally provided and created chaos in that decision," says Cramer, R-N.D. Breaking: Dakota Access Pipeline Approved. Despite the strong opposition of several tribes, the Army Corps of Engineers has approved nearly all permits to build the Dakota Access Pipeline project. 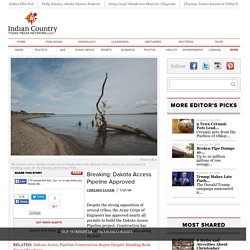 Construction has already begun in all four states along its path. RELATED: Dakota Access Pipeline Construction Begins Despite Standing Rock Sioux Objections “We are saddened to hear of this permit approval but knew the writing was on the wall,” the Indigenous Environmental Network said in a statement. “The Corps has a long history of going against the wishes and health of tribal nations.” The $3.78 billion, 1,172-mile-long pipeline proposed by the company Energy Transfer Partners, is also known as the Bakken pipeline, since that is the type of crude that would be transported through it.

Soon after, the Standing Rock Sioux Tribe launched a massive campaign to improve understanding of the devastation that a pipeline spill could cause. RELATED: Running for Their Lives: 500-Mile Youth Spiritual Run Against Dakota Access Pipeline [Video] Dakota Access Pipeline: Three Federal Agencies Side With Standing Rock Sioux, Demand Review. The U.S. 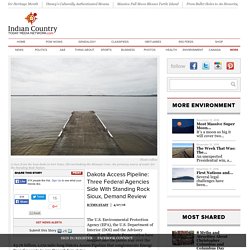 Environmental Protection Agency (EPA), the U.S. Department of Interior (DOI) and the Advisory Council on Historic Preservation have stepped into the public fray over the $3.78 billion, 1,172-mile-long Dakota Access Pipeline that conglomerate Energy Transfer wants to run through four states. The agencies each weighed in during March and early April with separate letters exhorting the U.S. Army Corps of Engineers, which is about to make a decision about the pipeline, to conduct a formal Environmental Impact Assessment and issue an Environmental Impact Statement (EIS). Each of them cited potential effects on and lack of consultation with tribes, most notably the Standing Rock Sioux. The EPA recommended that the Army Corps revise its Environmental Assessment and open up a second public comment period. The Interior Department expressed similar concerns in its letter. 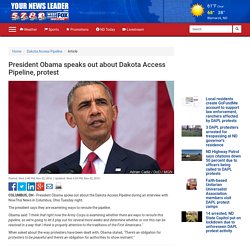 The president says they are examining ways to reroute the pipeline. Obama said: "I think that right now the Army Corps is examining whether there are ways to reroute this pipeline, so we're going to let it play out for several more weeks and determine whether or not this can be resolved in a way that I think is properly attentive to the traditions of the First Americans. " When asked about the way protesters have been dealt with, Obama stated, "There's an obligation for protesters to be peaceful and there's an obligation for authorities to show restraint. 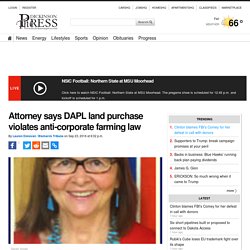 She said it’s not clear why Dakota Access needs to own the land when it already has a 150-foot pipeline easement. The anti-corporate farming law allows corporations to own land necessary for residential, commercial or industrial development, but Vogel said the ownership of 6,000 acres falls far beyond the scope of a narrow path for a pipeline to which it already has access. “That’s sketchy,” she said. The deed transfer from David and Brenda Meyer was recorded Thursday in the Morton County registrar’s office, which by law has 30 days to report corporate land purchases to the Attorney General’s office, according to the Century Code. 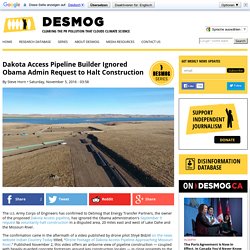 Army Corps of Engineers has confirmed to DeSmog that Energy Transfer Partners, the owner of the proposed Dakota Access pipeline, has ignored the Obama administration's September 9 request to voluntarily halt construction in a disputed area, 20 miles east and west of Lake Oahe and the Missouri River. The confirmation came in the aftermath of a video published by drone pilot Shiyé Bidziil on the news website Indian Country Today titled, “Drone Footage of Dakota Access Pipeline Approaching Missouri River.” Published November 2, this video offers an airborne view of pipeline construction — coupled with heavily guarded concrete fortresses around key construction locales — in close proximity to the Missouri River. Dakota Access Pipeline battle also playing out in court. While protests against the $3.8 billion oil pipeline project draw people from around the country, the Standing Rock Sioux and developers of the Dakota Access Pipeline are also clashing in court. 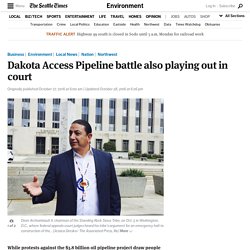 Here are the key legal issues. While protests against the Dakota Access Pipeline garner public attention, the Standing Rock Sioux Tribe is also trying to block the $3.8 billion project in the courtroom. In court filings this summer the tribe asserted it was never adequately consulted about the oil pipeline planned by Energy Transfer Partners of Dallas, Texas. CENSORED NEWS: US Appeals Court denies injunction to halt DAPL construction. U.S. 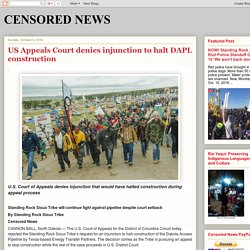 Court of Appeals denies injunction that would have halted construction during appeal process. The Indigenous Environmental Network Responds to U.S. Court of Appeals Injunction Denial to Halt DAPL Construction within 20 Miles of Missouri River. Court Rejects Dakota Access Injunction, But Standing Rock Sioux Vow 'This is Not The End' A U.S. federal court of appeals ruled against the Standing Rock Sioux Tribe late Sunday evening and denied its request for an emergency injunction against the controversial Dakota Access Pipeline. 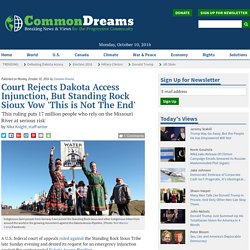 "This fight is far from over. "—Tom Goldtooth, Indigenous Environmental Network.