Reddit’s Female Dating Strategy offers women advice — and a strict rulebook for how to act. AA woman recently went to Reddit for advice: her fiancé had financially ruined her due to a gambling addiction, and she wasn’t sure what to do. 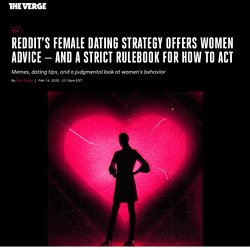 Members of Female Dating Strategy, a subreddit offering dating advice exclusively to women, spotted the thread and added their own assessment: her choice to stay with him was another example of “cockholm syndrome.” On a website commonly known as the home of the manosphere, r/FemaleDatingStrategy is, in many ways, initially, refreshing. The “female-only” forum, founded in February 2019, prides itself on being the only space on Reddit for women who date men to safely vent concerns about their relationships with men who often devalue them, ignore them, or even abuse them. It’s filled with memes and advice, and a recent Wall Street Journal piece praised it for offering “honesty and tough love.” 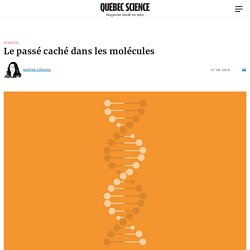 Hard-Hitting Nature Valley Ad Shows The Terrifying Side Of Kids Addicted To Technology [VIDEO] - Most Watched Today. Wikipedia Is the Last Best Place on the Internet. Social Nourishment + Restorative Solitude = Human Thriving. Humans thrive on a smorgasbord of "social nutrition" that includes both restorative alone time and meaningful social interactions, according to a new study. 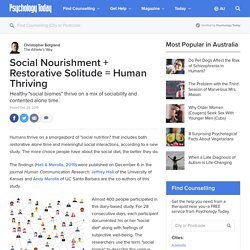 The more choice people have about the social diet, the better they do. The findings (Hall & Merolla, 2019) were published on December 6 in the journal Human Communication Research. Jeffrey Hall of the University of Kansas and Andy Merolla of UC Santa Barbara are the co-authors of this study. article continues after advertisement. Scientist Who Said Spiders Have Personalities May Have Faked Data.

Scientist Jonathan Pruitt become a notable figure in the field of behavioral ecology for reporting evidence that spiders have personalities. 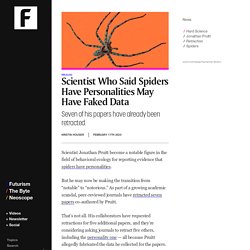 But he may now be making the transition from “notable” to “notorious.” As part of a growing academic scandal, peer-reviewed journals have retracted seven papers co-authored by Pruitt. You Don’t Want Hygge. You Want Social Democracy. It’s the holidays, and you long to be cozy. 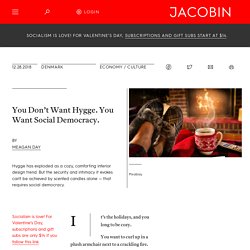 You want to curl up in a plush armchair next to a crackling fire. You want the softest of blankets and wooliest of sweaters. You want to devour grandma’s pecan fudge, get tipsy on eggnog with your cousins, and watch Miracle on 34th Street — mom’s favorite — for the thirty-fourth time. Or maybe neither Christmas nor family gatherings are your thing, but you like the idea of sipping hot toddies and playing board games with a few close friends while outside the snow falls and the lights twinkle. A Climate Change Lesson from Scotland's Little Ice Age. Photographer: Jeff J Mitchell/Getty Images We’ve heard a lot over the last few years about what Brexit might mean for the future of Britain and the United Kingdom. 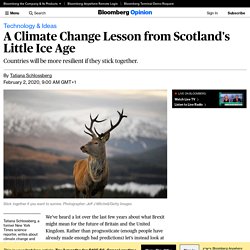 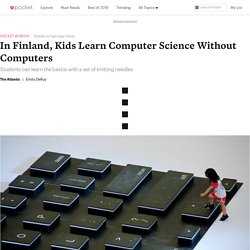 The Finns are pretty bemused by Americans’ preoccupation with whether to put iPads in every classroom. If a tablet would enhance learning, great. If it wouldn’t, skip it. Move on. L'amidonnier sauvage aurait des propriétés pour resister aux changements climatiques. Virtual Music Star Hatsune Miku to Perform at Coachella. On Thursday, organizers announced the 2020 lineup for arguably the most-hyped music festival in the world: Coachella. 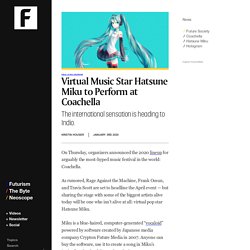 As rumored, Rage Against the Machine, Frank Ocean, and Travis Scott are set to headline the April event — but sharing the stage with some of the biggest artists alive today will be one who isn’t alive at all: virtual pop star Hatsune Miku. Guarded Looks. Guarded Looks Sunglasses — the original anti-facial-recognition technology — are both a reasonable defense against surveillance and an antisocial gesture that may encourage it Erin Moore January 09, 2020 share Image: From the series Hiding in the City by Liu Bolin. 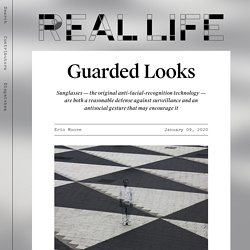 Study of YouTube comments finds evidence of radicalization effect. Research presented at the ACM FAT 2020 conference in Barcelona today supports the notion that YouTube’s platform is playing a role in radicalizing users via exposure to far-right ideologies. 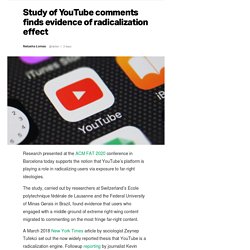 The study, carried out by researchers at Switzerland’s Ecole polytechnique fédérale de Lausanne and the Federal University of Minas Gerais in Brazil, found evidence that users who engaged with a middle ground of extreme right-wing content migrated to commenting on the most fringe far-right content. A March 2018 New York Times article by sociologist Zeynep Tufekci set out the now widely reported thesis that YouTube is a radicalization engine.

Moving to Mars: Designers reveal their visions for how humans will live on the Red Planet. Sci-fi writers have long dreamed of turning Mars into a more Earth-like planet for future colonisation. From the first photographic fly-by of Mars by the Mariner 4 spacecraft in 1965 to NASA's Orion project and Elon Musk's SpaceX venture, getting humans to the Red Planet has become one of the greatest challenges and preoccupations of our time. But conditions on Mars are deeply hostile to humans. It is too cold to maintain water and there is no ozone layer to shield against UV radiation. Unfleshing. New Feelings Unfleshing The desire to become as smooth and impervious as my phone Nikki Shaner-Bradford January 27, 2020 share. How one man changed the meaning of past, present and future.

Events happen in order – you whisk icing before decorating a cake. Some events seem to be present, while others are future or past. A birthday party lies in the future, approaching slowly. When the big day arrives, the party is present; afterwards, it slips into memory and the past. Pastness, presentness and futurity seem to be real features of the world, but are they really? Influencer Fatigue: Are We Done With Influencers? These Researchers Want You to Live In a Fungus Megastructure. Imagine that you roll out of bed onto a living fungus floor. The walls and ceiling — heck, the whole apartment building, down to the plumbing and electrical systems — are made of fungus too. Wood and concrete are remnants of the distant past; this entire city, from the schools to the stores to the hospitals, is made of living fungus — constantly growing, dying off and regenerating itself.

That’s the vision laid out in a provocative new paper, which a team of European academics say is the first-ever exploration of living fungus’ potential as a raw material for futuristic, eco-friendly “monolithic structures” that would, in their telling, revolutionize the entire built environment and economy. “We propose to develop a structural substrate by using live fungal mycelium,” reads the paper. “Fungal buildings will self-grow, build, and repair themselves.” Scientists are unraveling the Chinese coronavirus with unprecedented speed and openness. Sounds of the past give new hope for coral reef restoration. Young fish can be drawn to degraded coral reefs by loudspeakers playing the sounds of healthy reefs, according to new research published today in Nature Communications.

An international team of scientists from the UK's University of Exeter and University of Bristol, and Australia's James Cook University and Australian Institute of Marine Science, say this "acoustic enrichment" could be a valuable tool in helping to restore damaged coral reefs. Working on Australia's recently devastated Great Barrier Reef, the scientists placed underwater loudspeakers playing healthy reef recordings in patches of dead coral and found twice as many fish arrived—and stayed—compared to equivalent patches where no sound was played.

New psychology study indicates pursuing evolutionary-relevant goals provides purpose in life. Here's What the World Will Look Like in 2030 ... Right? ‘Alexa, pay for gas’ command to work at over 11,500 Exxon and Mobil stations this year. Chinese apps are losing their hold on India. Companion of the 2018 ACM/IEEE International Conference on Human-Robot Interaction. Campbell negotiatingethicalmakingcameraready. Dying churches merging with megachurches a growing trend, some oppose 'drastic change' A Japanese Cafe Is Hosting Playdates, Parties for Robot Dogs.

'War Against the Faithful': Chinese Gov't Tears Down Church Building as Christians Worship. Men's beliefs about masculinity can increase their physiological stress reactivity. Here's how much money these megachurches bring in across the US. Megachurches, Megapastors, and Megalomaniacs. United Methodist Church proposes historic split. Future Lithium-Ion Batteries Could One Day 'Heal' Themselves.

Agility’s two-legged robot Digit is for sale and Ford is the first customer. WeChat: Everything you need to know about China's super-app - Business Insider. What’s beyond Beyond Meat and Impossible Foods in the future of food? Russia starts testing its own internal internet. Society can be controlled through its means of communication. Watch SpaceX launch a new batch of Starlink satellites and become the largest private satellite operator. Huawei reportedly got by with a lot of help from the Chinese government. 2020 will be the beginning of the tech industry’s radical revisioning of the physical world. Tesla lands $1.4 billion from Chinese banks to build out its Shanghai gigafactory.

This Startup Made a Nose Spray for Microdosing Psilocybin. Now that Ikea has colonized Earth, it's going after Mars. Futurus wants to turn your car's whole windscreen into an AR display. Tesla dashcam saves owner from turn signal ticket - Electrek. New Microsoft Adaptive technology let blind pay baseball. No land, no problem: Floating solar panels might be the next big thing. Construction equipment is going electric, Volvo CE now favors electric over diesel for smaller machines. This dumper truck is the world's largest electric vehicle with a massive 700 kWh battery pack. Crypto, Cash and Drugs: Crypto Use Grows as Drug Trade Digitalizes. Psychedelics and Seniors: Can Drugs Such As Marijuana And Psilocybin Improve Their Quality Of Life? The Rise of the Virtual Restaurant. Artificial Intelligence Can Now Create Perfumes, Even Without A Sense Of Smell.