Software as a service 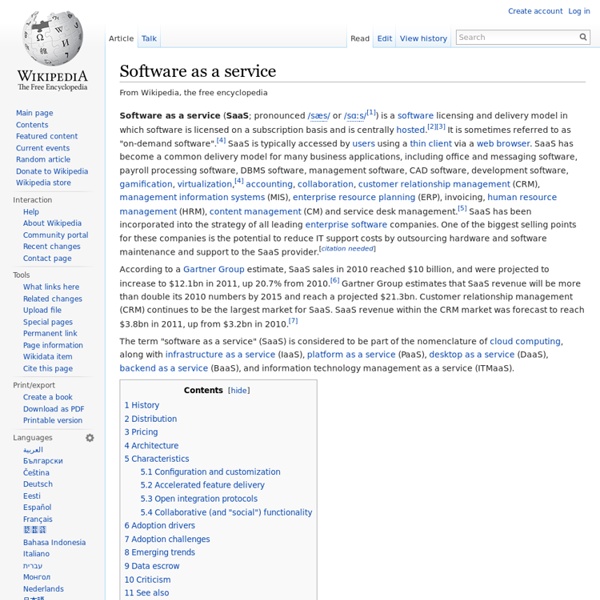 According to a Gartner Group estimate, SaaS sales in 2010 reached $10 billion, and were projected to increase to $12.1bn in 2011, up 20.7% from 2010.[6] Gartner Group estimates that SaaS revenue will be more than double its 2010 numbers by 2015 and reach a projected $21.3bn. Customer relationship management (CRM) continues to be the largest market for SaaS. SaaS revenue within the CRM market was forecast to reach $3.8bn in 2011, up from $3.2bn in 2010.[7] The term "software as a service" (SaaS) is considered to be part of the nomenclature of cloud computing, along with infrastructure as a service (IaaS), platform as a service (PaaS), desktop as a service (DaaS), backend as a service (BaaS), and information technology management as a service (ITMaaS). History[edit] Centralized hosting of business applications dates back to the 1960s. The expansion of the Internet during the 1990s brought about a new class of centralized computing, called Application Service Providers (ASP). Pricing[edit] Related:  Digital Marketing

Service-oriented architecture See also the client-server model, a progenitor concept A Service-Oriented Architecture (SOA) is a design pattern in which software/application components provide services to other software/application components via a protocol, typically over a network and in a loosely-coupled way. The principles of service-orientation are independent of any vendor, product or technology.[1] A service is a self-contained unit of functionality, such as retrieving an online bank statement.[2] By that definition, a service is a discretely invokable operation. Services can be combined to provide the complete functionality of a large software application.[3] A SOA makes it easier for software components on computers connected over a network to cooperate. Definitions[edit] A paradigm for organizing and utilizing distributed capabilities that may be under the control of different ownership domains. The Open Group's definition is: Overview[edit] SOA framework[edit] Design concept[edit] Principles[edit]

The Edutella Homepage News Project Description Edutella is a peer to peer network for searching semantic web metadata. Finding out what information the system contains and how it can be represented on the semantic web with help of existing standards. Somewhat simplified the core of Edutella consists of a library and a query language. Voice over Internet Protocol Voice over Internet Protocol (VoIP) is a methodology and group of technologies for the delivery of voice communications and multimedia sessions over Internet Protocol (IP) networks, such as the Internet. Other terms commonly associated with VoIP are IP telephony, Internet telephony, voice over broadband (VoBB), broadband telephony, IP communications, and broadband phone service. The term Internet telephony specifically refers to the provisioning of communications services (voice, fax, SMS, voice-messaging) over the public Internet, rather than via the public switched telephone network (PSTN). The steps and principles involved in originating VoIP telephone calls are similar to traditional digital telephony and involve signaling, channel setup, digitization of the analog voice signals, and encoding. Early providers of voice over IP services offered business models and technical solutions that mirrored the architecture of the legacy telephone network. Pronunciation[edit] Protocols[edit]

Feedly §History[edit] In November, 2006, Edwin Khodabakchian co-founded DevHD.[3] The company seeks to create a platform that uses RSS feeds, online storage, and social media integration to connect users with the information they find interesting.[3] DevHD’s first project, Streets, which aggregates updates from a variety of online sources is the basis of Feedly. Feedly, which was optimized for RSS feeds, was first released on June 15, 2008.[3] Originally called Feeddo, Feedly was first released as a web extension before moving onto mobile platforms.[4] On March 15, 2013, Feedly announced 500,000 new users in 48 hours due to the closure announcement of Google Reader.[5] By April 2, 2013, the total number of new users was up to 3 million.[6] At the end of May 2013, the total user number was up to 12 million.[7] §Web browser applications[edit] §Android and iOS app[edit] §Reception[edit] Feedly has received mostly positive reviews. §Denial of service attacks[edit] §See also[edit] §References[edit]

WebAppSkins New Features in 2.5 - Windows Azure support The artcile New Features in 2.5 showcases several new features in Joomla 2.5. In addition to supporting MS SQL Databases covering SQLServer 2008 and SQLAZure, Joomla 2.5 supports Azure Storage CDN and Azure deployment. Windows Azure is the Cloud platform from Microsoft. The Azure storage CDN is not part of the Joomla 2.5 core, but is available as a Joomla extension. We have made it easy to deploy Joomla on Windows Azure by providing a Joomla Scaffolder framework. 1. 2. 3. 4. Let me outline instructions needed to build the Joomla Package ready to be deployed on Windows Azure. Assumptions: 1. 2. 3. 4. 5. 6. a. images (for Media Manager sync) b. config (To upload cscfg and cspkg file for deployment) Steps to build the Azurified Package 1. 2. 3. 4. call scaffolder run -out="%PWD%\build\Joomla" -s="%PWD%\build\Joomla.phar" -db jbase -user "demosql@xxx4XXXjiw" -password "Sam@123" -host "XXX.database.windows.net" -sample_data 1 -admin_user "admin" -admin_password "admin2222" 5. 6. 7. 8. 9. 10. 1.

7 Ways to Love Blog Comments Again Comments on blogs, what are they good for? Sometimes it's hard to remember, but you know there's a lot of potential in taking the democratization of publishing to the next level and letting people comment on your blog-written comments on the world. This evening a fresh spate of debate has rolled over the tech blogosphere about whether it's worth it to allow commenting on blog posts at all. Comment fields are spam magnets, their filled with trollish bile and abuse, they rarely offer meaningful discourse and they're more trouble than they're worth, critics say. Supporters contend otherwise, and as one of those, I offer below seven specific ways that new startups can optimize the discourse after a blog post has been published by its author. If these don't work, maybe nothing will, but I think they are only the beginning. Engagio Blog comments aren't just about call and response between blogger and audience, they're about building a network of relationships. Disqus and the Top Vote Getters

Pearltrees Pearltrees refers to itself as "a place for your interests".[8] Functionally the product is a visual and collaborative curation tool[9][10][11][12] that allows users to organize, explore and share any URL they find online as well as to upload personal photos, files and notes.[13] The product features a unique visual interface[14][15] that allows users to drag and organize collected URLs, and other digital objects.[16] that themselves can be further organized into collections and sub-collections,[17] (URLs). Users of the product can also engage in social/collaborative curation using a feature called Pearltrees Teams.[18] Pearltrees was founded by Patrice Lamothe, CEO,[22] Alain Cohen, CTO,[23] Nicolas Cynober, Technical Director,[24] Samuel Tissier, Ergonomy/UI[25] and Francois Rocaboy, CMO.[26] History[edit] Development of Pearltrees began in 2007. In July 2012 Pearltrees launched their iPhone app. Pearltrees introduced Pearltrees 2.0 on May 22nd, 2014. Usage[edit] Privacy[edit]

Software as a Service (SaaS): The delivery of computer applications over the Internet.