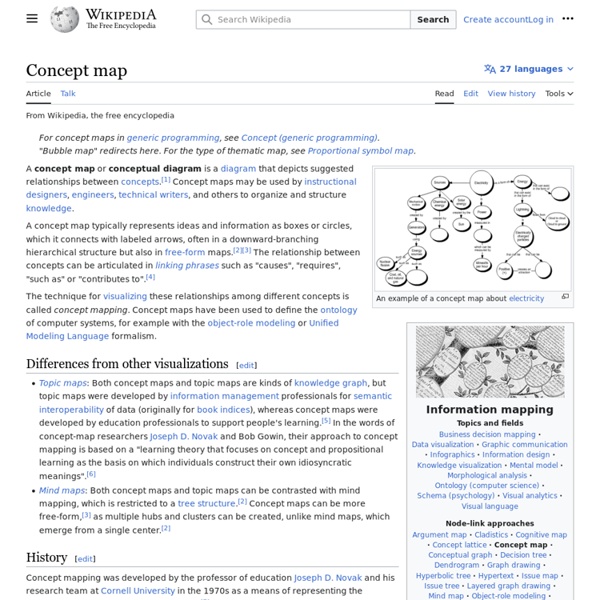 A concept map or conceptual diagram is a diagram that depicts suggested relationships between concepts.[1] It is a graphical tool that instructional designers, engineers, technical writers, and others use to organize and structure knowledge. A concept map typically represents ideas and information as boxes or circles, which it connects with labeled arrows in a downward-branching hierarchical structure. The relationship between concepts can be articulated in linking phrases such as causes, requires, or contributes to.[2] Overview[edit] A concept map is a way of representing relationships between ideas, images, or words in the same way that a sentence diagram represents the grammar of a sentence, a road map represents the locations of highways and towns, and a circuit diagram represents the workings of an electrical appliance. In a concept map, each word or phrase connects to another, and links back to the original idea, word, or phrase. Concept maps were developed[according to whom?]

Mind map A mind map about educational technology A mind map is a diagram used to visually organize information. A mind map is hierarchical and shows relationships among pieces of the whole.[1] It is often created around a single concept, drawn as an image in the center of a blank page, to which associated representations of ideas such as images, words and parts of words are added. Major ideas are connected directly to the central concept, and other ideas branch out from those major ideas. Mind maps can also be drawn by hand, either as "rough notes" during a lecture, meeting or planning session, for example, or as higher quality pictures when more time is available. Origins[edit] The semantic network was developed in the late 1950s as a theory to understand human learning and developed further by Allan M. Popularisation[edit] Buzan says the idea was inspired by Alfred Korzybski's general semantics as popularized in science fiction novels, such as those of Robert A. Guidelines[edit] Uses[edit]

Computational visualistics - Wikipedia The term Computational visualistics is used for addressing the whole range of investigating scientifically pictures "in" the computer.[1] Overview[edit] Images take a rather prominent place in contemporary life in the western societies. Together with language, they have been connected to human culture from the very beginning. For about one century – after several millennia of written word's dominance – their part is increasing again remarkably. Steps toward a general science of images, which we may call 'general visualistics' in analogy to general linguistics, have only been taken recently. In computer science, too, considering pictures evolved originally along several more or less independent questions, which lead to proper sub-disciplines: computer graphics is certainly the most "visible" among them. Areas covered[edit] Algorithms from »image« to »image«[edit] Algorithms from »image« to "not-image"[edit] Algorithms from "not-image" to »image«[edit] References[edit] Further reading[edit]

Mind42 - Mind mapping can be Free, Fast and Simple Mind-Mapping Method for Note Taking - Kutztown University Mind Maps are visual diagrams with lines and pictures that represent ideas and the relationships between ideas. Mind Maps are great, not only for taking notes, but also for brainstorming and planning. This style of note taking is effective because it is a fast and efficent way of getting down branching ideas with one or two words, not lengthy explanations. The use of pictures, color, and creativity is encouraged. Mind mapping is about the process of creating the diagram as much as it is about making studying easier. To create a Mind Map, first put the main idea in the center of the page. Return to Note Taking

Imagination age - Wikipedia The imagination age is a theoretical period beyond the information age where creativity and imagination will become the primary creators of economic value. This contrasts with the information age where analysis and thinking were the main activities.[1][2] The concept holds that technologies like virtual reality, user created content and YouTube will change the way humans interact with each other and how they create economic and social structures. A key concept is that the rise of the immersive virtual reality, the cyberspace or the metaverse will raise the value of imagination work of designers, artists, video makers and actors over rational thinking as a foundation of culture and economics. Origins of the term[edit] The terms imagination age and "age of imagination" were first introduced in an essay by designer and writer Charlie Magee in 1993. "Imagination Age" has been popularized as a cultural and economic philosophy by artist, writer and cultural philosopher Rita J. See also[edit]

Attention economy - Wikipedia economic view of human attention as a commodity Attention economics is an approach to the management of information that treats human attention as a scarce commodity, and applies economic theory to solve various information management problems. Put simply by Matthew Crawford, "Attention is a resource—a person has only so much of it."[1] In this perspective Thomas H. Attention is focused mental engagement on a particular item of information. As content has grown increasingly abundant and immediately available, attention becomes the limiting factor in the consumption of information.[2] A strong trigger of this effect is that the mental capability of humans is limited and the receptiveness of information is hence limited as well. History[edit] Herbert A. [I]n an information-rich world, the wealth of information means a dearth of something else: a scarcity of whatever it is that information consumes. Intangibles[edit] Social attention, collective attention[edit] Applications[edit] Web spam[edit]

Cultural analytics - Wikipedia History[edit] The term "cultural analytics" was coined by Lev Manovich in 2007. Cultural analytics shares many ideas and approaches with visual analytics ("the science of analytical reasoning facilitated by visual interactive interfaces") and visual data analysis: Visual data analysis blends highly advanced computational methods with sophisticated graphics engines to tap the extraordinary ability of humans to see patterns and structure in even the most complex visual presentations. While increased computing power and technical developments allowing for interaction visualization have made the exploration of large data sets using visual presentations possible, the intellectual drive to understand cultural and social processes and production pre-dates many of these computational advances. Current research[edit] Methodologies[edit] Cultural analytics relies heavily on software-based tools, and the field is related to the nascent discipline of software studies. Related methodologies[edit]

Conservation and restoration of new media art - Wikipedia The conservation and restoration of new media art is the study and practice of techniques for sustaining new media art created using from materials such as digital, biological, performative, and other variable media. Artists' increased use of multi-media, digital, and internet media since the 1960s has called into question the conventional strategies by which society preserves, cares for, and redisplays cultural artifacts created with or on ephemera media formats. While the most obvious vulnerability of new media art is rapid technological obsolescence, the study of its other aspects that defy traditional conservation—including hybrid, contextual, or 'live' qualities—has provoked investigation into new strategies for preserving conceptual art, performance, installation art, video art, and even to a limited extent painting and sculpture. Relationship to other preservation efforts[edit] Preservation strategies[edit] Storage[edit] Variations on storage include: Refreshing Restoration Contained

Digital curation - Wikipedia The term curation in the past commonly referred to museum and library professionals. It has since been applied to interaction with social media including compiling digital images, web links and movie files. Approaches to digital curation[edit] The Digital Curation Centre is a "world leading centre of expertise in digital information curation"[5] that assists higher education research institutions. The DCC is based in the UK and began operations in early 2004. The following is a general outline of their approach to digital curation: Conceptualize: Consider what digital material you will be creating and develop storage options. Sheer curation[edit] Sheer curation is an approach to digital curation where curation activities are quietly integrated into the normal work flow of those creating and managing data and other digital assets. A similar idea is curation at source used in the context of Laboratory Information Management Systems LIMS. Channelisation[edit] See also[edit] References[edit]

Digital library An electronic library (colloquially referred to as a digital library) is a focused collection of digital objects that can include text, visual material, audio material, video material, stored as electronic media formats (as opposed to print, microform, or other media), along with means for organizing, storing, and retrieving the files and media contained in the library collection. Digital libraries can vary immensely in size and scope, and can be maintained by individuals, organizations, or affiliated with established physical library buildings or institutions, or with academic institutions.[1] The electronic content may be stored locally, or accessed remotely via computer networks. An electronic library is a type of information retrieval system. A distinction is often made between content that was created in a digital format, known as born-digital, and information that has been converted from a physical medium, e.g. paper, by digitizing. Academic repositories[edit] The future[edit]