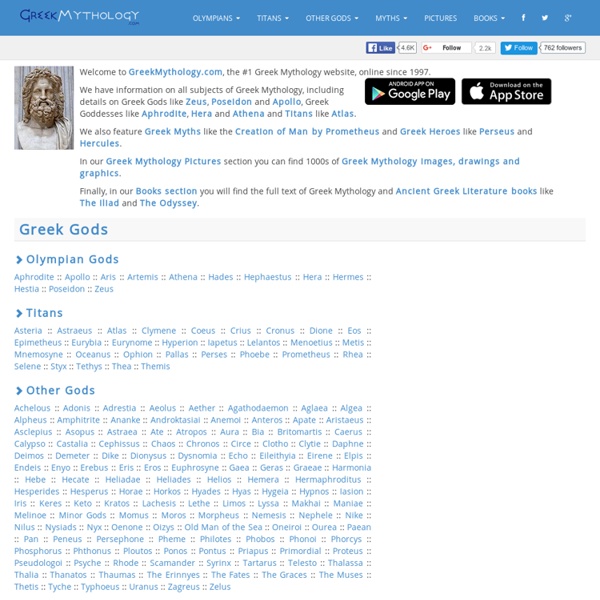 Lyssa Description[edit] She personifies mad rage and frenzy, as well as rabies in animals. In Herakles she is called upon by Hera to inflict the hero Heracles with insanity. In this scenario she is shown to take a temperate, measured approach to her role, professing "not to use [her powers] in anger against friends, nor [to] have any joy in visiting the homes of men." She counsels Iris, who wishes to carry out Hera's command, against targeting Heracles but, after failing to persuade, bows to the orders of the superior goddess and sends him into a mad rage that causes him to murder his wife and children.[1] Greek vase-paintings of the period indicate her involvement in the myth of Aktaion, the hunter torn apart by his own, maddened dogs as a punishment for looking on the naked form of the goddess Artemis.

Hesiod, the Homeric Hymns and Homerica Online Medieval and Classical Library Release #8 (Loeb Classics #57) CONTENTS: [ Preparer's Note ] [ Preface ] [ Introduction ] Translations, introduction and explanatory material by Hugh G. Minoan civilization Map of Minoan Crete The Minoan civilization was an Aegean Bronze Age civilization that arose on the island of Crete and flourished from approximately the 27th century BC to the 15th century BC.[1] It was rediscovered at the beginning of the 20th century through the work of British archaeologist Arthur Evans. Will Durant referred to it as "the first link in the European chain. The Grigori The Watchers The Lord spoke: "Have no fear, Enoch, good man and scribe of goodness. Come hear my voice.

Sumerian Myths Sumerian civilization originated in what is now southern Iraq, just upriver from the mouths of the Tigris and Euphrates rivers. "Civilization" in this context means a settled town or city-dwelling people who possess a stable agricultural technology (including domesticated animals) and have developed a hierarchical system of social classes (peasants, laborers, slaves, craftsmen [smiths, masons, carpenters, potters, etc.], farmers, fishermen, merchants, doctors, architects, priests and temple attendants, bureaucrats, scribes, advisers, priest-kings). Since the climate of southern Iraq is hot and dry, agriculture requires an extensive irrigation system of canals and dikes. Often, the Sumerians wrote as if their civilization (agricultural techniques, cities, classes of people) came first, and people later. (Why do you think they thought this way?) Map of Mesopotamian Archeological Sites (Oriental Institute, University of Chicago)

INC: The Grigori (unofficial version) (unofficial version) by "Kirt A. Dankmyer -- aka Loki" (dankmyka@wfu.edu) Here is my version of the Grigori. I welcome any comments and critique.... 5 Shockingly Advanced Ancient Buildings That Shouldn't Exist Back in the 1960s, surveyors in Turkey found an ancient buried complex composed of huge stone pillars arranged in a circle like Stonehenge, some of them 30 feet tall. What really knocked the monocles out of their eyes, however, was that this was much older than Stonehenge ... 6,000 years older. TeomancimitThe hieroglyphics translate to "First!" So those massive, ornate limestone pillars were carefully carved from a nearby quarry using hunks of flint rock and their bare hands. Having been dated to around 9000 B.C., Gobekli Tepe is thought to be the oldest human construction.

In Nomine Characters I've taken over the In Nomine Collection's Rogue's Gallery. Sorry to change the format so abruptly, but I'm trying to make it mesh with my GURPS Character Archive. Same rules as with the GURPS lot -- if you're not comfortable with a concept, don't read it. I'm not going to deal with the black background-white text trick, though. (Among other reasons, makes it hard to print the page.) The game already requires one to be mature about religion being depicted in a game; if there are sexual issues in these pages (and there are some), you'll have to be mature about them, too. Robot finds 3 rooms under Feathered Serpent temple A robot named Tláloc II-TC, equipped with an infrared camera and laser scanner, has discovered three new chambers underneath the Temple of the Feathered Serpent pyramid in the Mesoamerican metropolis of Teotihuacan. He was sent down a tunnel 390 feet long that was discovered 50 feet below the surface of the temple in 2003. The tunnel had been filled with debris by the ancient Teotihuacans to block access, an effective technique since despite centuries of looting and archaeological excavations nobody had managed to breach it. It’s been a decade since the subterranean conduit was discovered and five years since excavations began, and archaeologists have only able to get a glimpse of what’s on the other side in the past few months. They first discovered two side rooms dubbed the North Chamber and the South Chamber 236 and 242 feet respectively from the entrance. The human archaeologists couldn’t get any further than that, so they deployed Tláloc II-TC to travel another 65 feet.

5 Terrifying Serial Killers Who Happened to Be Animals The most dangerous animal on earth is man -- nothing you read in this article will change that. Animals kill for food and territory, and out of fear, but it takes a man to kill repeatedly, just for the fun of it. Well ... usually. As we have previously shown, the animal kingdom has its fair share of diabolical serial killers. Like ...