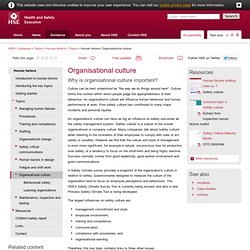 Culture can be best understood as "the way we do things around here". Culture forms the context within which people judge the appropriateness of their behaviour. An organisation's culture will influence human behaviour and human performance at work. Poor safety culture has contributed to many major incidents and personal injuries. An organisation's culture can have as big an influence on safety outcomes as the safety management system. A Safety Climate survey provides a snapshot of the organisation's culture in relation to safety. The largest influences on safety culture are: management commitment and style; employee involvement; training and competence; communication; compliance with procedures; and organisational learning. Therefore, this key topic contains links to three other issues: Key principles on organisational culture A culture change process can take several years. 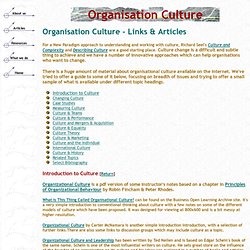 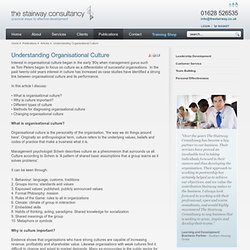 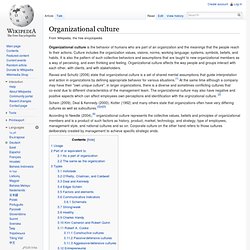 Culture includes the organization values, visions, norms, working language, systems, symbols, beliefs, and habits. It is also the pattern of such collective behaviors and assumptions that are taught to new organizational members as a way of perceiving, and even thinking and feeling. Organizational culture affects the way people and groups interact with each other, with clients, and with stakeholders. Ravasi and Schultz (2006) state that organizational culture is a set of shared mental assumptions that guide interpretation and action in organizations by defining appropriate behavior for various situations.[1] At the same time although a company may have their "own unique culture", in larger organizations, there is a diverse and sometimes conflicting cultures that co-exist due to different characteristics of the management team. Usage[edit] Types[edit]