The Art of Asia 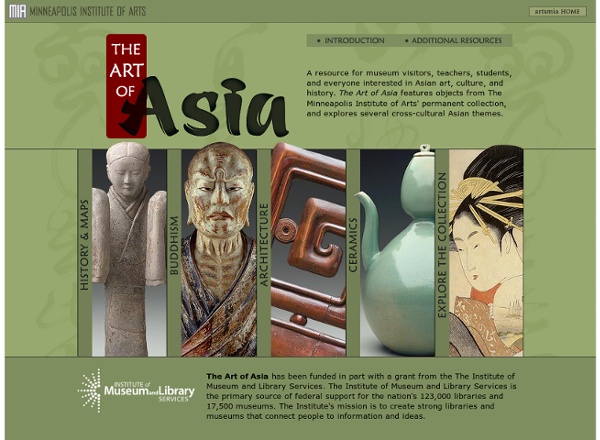 Ancient Chinese Civilization 1 click Chinese Historical Accounts the Forbidden City, the home of the Chinese emperors until the last dynasty was overthrown in the 20th century Chinese history, until the twentieth century, was written mostly by members of the ruling scholar-official class and was meant to provide the ruler with precedents to guide or justify his policies. These accounts focused on dynastic politics and colorful court histories and included developments among the commoners only as backdrops. The historians described a Chinese political pattern of dynasties, one following another in a cycle of ascent, achievement, decay, and rebirth under a new family. Of the consistent traits identified by independent historians, a salient one has been the capacity of the Chinese to absorb the people of surrounding areas into their own civilization. Sun-Tzu, the realist writer of the the influential "Art of War" The first prehistoric dynasty is said to be Xia , from about the twenty-first to the sixteenth century B.C.

The Real Reason America Used Nuclear Weapons Against Japan. It Was Not To End the War Or Save Lives. Like all Americans, I was taught that the U.S. dropped nuclear bombs on Hiroshima and Nagasaki in order to end WWII and save both American and Japanese lives. But most of the top American military officials at the time said otherwise. The U.S. Strategic Bombing Survey group, assigned by President Truman to study the air attacks on Japan, produced a report in July of 1946 that concluded (52-56): Based on a detailed investigation of all the facts and supported by the testimony of the surviving Japanese leaders involved, it is the Survey’s opinion that certainly prior to 31 December 1945 and in all probability prior to 1 November 1945, Japan would have surrendered even if the atomic bombs had not been dropped, even if Russia had not entered the war, and even if no invasion had been planned or contemplated. General (and later president) Dwight Eisenhower – then Supreme Commander of all Allied Forces, and the officer who created most of America’s WWII military plans for Europe and Japan – said:

Ancient China - Ancient Civilizations East Asia also has dry areas. The Gobi Desert is found along the border between Mongolia and China. The Gobi is the 5th largest desert in the world and is also the coldest. It is common to see frost or even snow on the sand and gravel dunes. Most of western China is very dry because of the rain shadow created by the Himalaya Mountains. A rain shadow is a dry area on the leeward (opposite of windward) side of a mountainous area. Despite the dry and mountainous terrain of East Asia, there are some low plains suitable for early civilization. Heavy summer rains and snowmelt support 2 large river systems in East Asia. East Asia has many different climate types. Early History Humans probably reached East Asia between 30,000 and 50,000 years ago. Ancient China It is difficult to be sure about China’s early ancient history. The Zhou Dynasty (1046 BCE-256 BCE) lasted longer than any other dynasty in Chinese history. Agriculture was usually directed by the government. Dynasty.

China: Surviving the Camps by Zha Jianying | NYR Daily By now, it has been nearly forty years since the Cultural Revolution officially ended, yet in China, considering the magnitude and significance of the event, it has remained a poorly examined, under-documented subject. Official archives are off-limits. Serious books on the period, whether comprehensive histories, in-depth analyses, or detailed personal memoirs, are remarkably few. At the center of the book is the cowshed, the popular term for makeshift detention centers that had sprung up in many Chinese cities at the time. To mentally relive such darkness and to record it all in such an unswervingly candid manner could not have been easy for an elderly man: Ji was over eighty at the time of writing. Originally published by an official press in Beijing in 1998, during a politically relaxed moment, The Cowshed probably benefited from the author’s eminent status in China. Reading Ji’s account again, however, has also renewed some of my old questions and frustrations.

China History: Chronology, Dynasty Qin Han Tang Song Yuan Ming Qing China, one of the countries that can boast of an ancient civilization, has a long and mysterious history - almost 5,000 years of it! Like most other great civilizations of the world, China can trace her culture back to a blend of small original tribes which have expanded till they became the great country we have today. It is recorded that Yuanmou man is the oldest hominoid in China and the oldest dynasty is Xia Dynasty. From the long history of China, there emerge many eminent people that have contributed a lot to the development of the whole country and to the enrichment of her history. Among them, there are emperors like Li Shimin (emperor Taizong of the Tang), philosophers like Confucius, great patriotic poets like Qu Yuan and so on. Chinese society has progressed through five major stages - Primitive Society, Slave Society, Feudal Society, Semi-feudal and Semi-colonial Society, and Socialist Society. Chinese History Chronology

This Japanese Scroll Was Re-Printed a Million Times—700 Years Before Gutenberg - Atlas Obscura Empress Shōtoku occupied the Japanese throne twice. She ruled first from 749 to 758 C.E. as Empress Kōken, abdicating because she fell into a depression. In 761, following her mother’s death, a Buddhist monk named Dōkyō was brought in to help her. The two grew close, and Shōtoku soon promoted him to high levels of government far out of step with his nominal political experience. Her cousin Fujiwara no Nakamaro questioned her judgment, and a battle ensued that ended in the cousin’s death and Shōtoku’s renewed claim to the throne. With Dōkyō at her side, she ruled as Empress Shōtoku from 764 to 770. So Empress Shōtoku did something that would reverberate throughout world history: she ordered the printing of one million dhāranī texts. The one million figure was, in the words of John Bidwell, Astor Curator of Printed Books and Bindings at the Morgan Library & Museum, “a notional number” meant to exemplify Shōtoku’s power. In fact, printing has existed since at least the early 700s.

Asia was settled in multiple waves of migration, DNA study suggests An international team of researchers studying DNA patterns from modern and archaic humans has uncovered new clues about the movement and intermixing of populations more than 40,000 years ago in Asia. Using state-of-the-art genome analysis methods, scientists from Harvard Medical School and the Max Planck Institute for Evolutionary Anthropology in Leipzig, Germany, have found that Denisovans -- a recently identified group of archaic humans whose DNA was extracted last year from a finger bone excavated in Siberia -- contributed DNA not just to present-day New Guineans, but also to aboriginal Australian and Philippine populations. The study demonstrates that contrary to the findings of the largest previous genetic studies, modern humans settled Asia in more than one migration. According to David Reich, a professor of genetics at Harvard Medical School, "Denisova DNA is like a medical imaging dye that traces a person's blood vessels. Genetic footprints The researchers concluded that:

Two minutes to midnight: did the US miss its chance to stop North Korea’s nuclear programme? | News Pyongyang International is one of the world’s quieter airports. The country’s chronic isolation means that there are not many places to fly, and few foreigners keen on visiting. At least until a new terminal was built in 2012, many of the flights on the departure boards were just for show, giving the appearance of connection with the outside world. They never actually took off. Against this melancholy backdrop, one day in late May 1999, something quite extraordinary happened. An official plane bearing the blue-and-white livery of the US government and emblazoned with the stars and stripes landed and taxied along the runway. The flightpath followed by Perry’s plane, which had taken off in Japan, had not been used since the Korean war. Perry was arriving at a moment of high tension. By the time the US delegation arrived in Pyongyang, a 1994 agreement between Washington and Pyongyang, intended to prevent North Korea from ever becoming a nuclear weapons state, was fraying. And potatoes.

How Long-Unpublished Press Photos Bring Life to Chinese History This is the fourth article in a series on “Old Photos,” a Chinese-language publication that collects images of the country’s modern history. Parts one, two, and three can be found here. In the 1990s, the Xinhua News Agency — China’s state newswire — began opening its photographic archives to the public. I vividly remember the faint musty smell that came off the yellowed pages of those albums as I flicked through them, glancing back and forth between the photos and the typewritten captions beneath them. I used the archives a lot during the first few years after my team and I started printing a series of photography books, “Old Photos,” in 1996. Sociologist Pan Guangdan talks to Mao Zedong during a break in a meeting at the Chinese People’s Political Consultative Conference being held in Beijing, Oct. 23, 1951. One such image was a photograph of Mao Zedong and Pan Guangdan, a famed educator and one of the founding fathers of modern Chinese sociology.

War, Hardship, and Separation: Portraits of a Changing China The art of photography was introduced into China in the latter half of the 19th century. Soon afterward, photo studios first popped up in the country’s colonial treaty ports and later in cities further inland. The mysterious new trade allowed many curious Chinese to examine everyday life across the country. Many of us feel self-conscious in front of the camera. Nevertheless, photography soon found a place in people’s lives. Since 1996, my magazine — simply titled “Old Photos” — has published countless family portraits taken during the 19th and 20th centuries. A photograph of a peasant family in Yantai, Shandong province, taken by a foreign missionary in the 1920s. The photo above, taken by a foreign missionary in the 1920s, depicts an ordinary peasant family in Yantai, a city in eastern China’s Shandong province. Flanking the elderly couple are their son and his wife. Back in the 1920s, a family with few men would have been at a social and economic disadvantage.

The Foreign Missionaries Who First Turned a Lens on China This is the second article in a series on “Old Photos,” a Chinese-language publication that collects images of the country’s modern history. The first article can be found here. While soliciting contributions for my publication “Old Photos,” I once received an album from a museum worker. A note the size of my palm was stuck to the other side of the hardback cover, explaining that the photos were confiscated from a foreign missionary working in the area when the Communist Party reunified China in 1949. Christian missionaries began preaching in significant numbers in China from the 16th century and deepened their presence here as European colonial powers expanded their interests in China during the mid-to-late Qing Dynasty. China’s official history books tend to focus primarily on grand narratives. At the time, Chinese people were wary of foreign missionaries. Foreign missionaries in China have always faced misunderstanding and hostility, especially when they had just arrived.