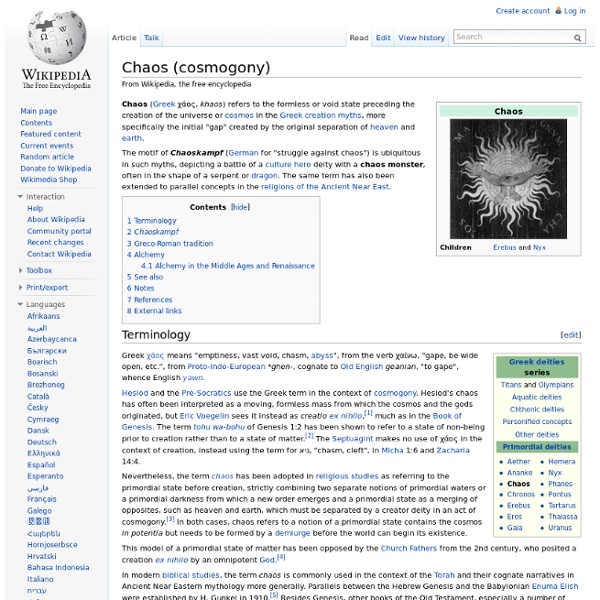 Gaia (mythology) The Greek word γαῖα (transliterated as gaia) is a collateral form of γῆ[4] (gē, Doric γᾶ ga and probably δᾶ da)[5] meaning Earth,[6] a word of uncertain origin.[7] R. S. P. Beekes has suggested a Pre-Greek origin.[8] In Mycenean Greek Ma-ka (trans. as Ma-ga, "Mother Gaia") also contains the root ga-.[9][10] According to Hesiod, Gaia conceived further offspring with Uranus, first the giant one-eyed Cyclopes: Brontes ("Thunder"), Steropes ("Lightning") and Arges ("Bright");[16] then the Hecatonchires: Cottus, Briareos and Gyges, each with a hundred arms and fifty heads.[17] As each of the Cyclopes and Hecatonchires were born, Uranus hid them in a secret place within Gaia, causing her great pain. Because Cronus had learned from Gaia and Uranus, that he was destined to be overthrown by his own child, Cronus swallowed each of the children born to him by his Titan sister Rhea. With Gaia's advice[21] Zeus defeated the Titans. In classical art Gaia was represented in one of two ways.

Tartarus Greek mythology[edit] In Greek mythology, Tartarus is both a deity and a place in the underworld. In ancient Orphic sources and in the mystery schools, Tartarus is also the unbounded first-existing entity from which the Light and the cosmos are born. As for the place, Hesiod asserts that a bronze anvil falling from heaven would fall nine days before it reached the earth. The anvil would take nine more days to fall from earth to Tartarus.[3] In The Iliad (c. 700 BC), Zeus asserts that Tartarus is "as far beneath Hades as heaven is high above the earth." Originally, Tartarus was used only to confine dangers to the gods of Olympus. According to Plato (c. 427 BC), Rhadamanthus, Aeacus and Minos were the judges of the dead and chose who went to Tartarus. Plato also proposes the concept that sinners were cast under the ground to be punished in accordance with their sins in the Myth of Er. There were a number of entrances to Tartarus in Greek mythology. Roman mythology[edit] New Testament[edit]

Greco-Roman mysteries See Western esotericism for modern "mystery religions" in the Western cultural sphere. Definition[edit] The term "Mystery" derives from Latin mysterium, from Greek mysterion (usually as the plural mysteria μυστήρια), in this context meaning "secret rite or doctrine". An individual who followed such a "Mystery" was a mystes, "one who has been initiated", from myein "to close, shut", a reference to secrecy (closure of "the eyes and mouth")[4]:56 or that only initiates were allowed to observe and participate in rituals. Characteristics[edit] Mystery religions form one of three types of Hellenistic religion, the others being the imperial cult or ethnic religion particular to a nation or state, and the philosophic religions such as Neoplatonism. Mysteries thus supplement rather than compete with civil religion. The mystery cults offered a niche for the preservation of archaic religious ritual, and there is reason to assume that they were very conservative. List of mystery cults[edit]

Eros Eros (/ˈɪərɒs/ or US /ˈɛrɒs/; Ancient Greek: Ἔρως, "Desire"), in Greek mythology, was the Greek god of love. His Roman counterpart was Cupid[2] ("desire"). Some myths make him a primordial god, while in other myths, he is the son of Aphrodite. Cult and depiction[edit] Eros appears in ancient Greek sources under several different guises. A cult of Eros existed in pre-classical Greece, but it was much less important than that of Aphrodite. Primordial god[edit] Homer does not mention Eros. Son of Aphrodite[edit] [Hera addresses Athena:] “We must have a word with Aphrodite. "Once, when Venus’ son [Cupid, aka Eros] was kissing her, his quiver dangling down, a jutting arrow, unbeknown, had grazed her breast. "Eros drove Dionysos mad for the girl [Aura] with the delicious wound of his arrow, then curving his wings flew lightly to Olympus. Eros and Psyche[edit] The story tells of the struggle for love and trust between Eros and Psyche. Eros in art[edit] See also[edit] References and sources[edit]

Erebus In Greek literature the name Erebus is also used of a region of the Greek underworld where the dead pass immediately after dying, and is sometimes used interchangeably with Tartarus.[3][4][5][6][7] The perceived meaning of Erebus is "darkness"; the first recorded instance of it was "place of darkness between earth and Hades". Hebrew עֶרֶב (ˤerev) 'sunset, evening' is sometimes cited as a source.[3][8] However, an Indo-European origin, at least for the name Ἔρεβος itself, is more likely. The Roman writer Hyginus, in his Fabulae, described Erebus as the father of Geras, the god of old age.[10] References[edit] Notes Jump up ^ Ἔρεβος. Sources External links[edit] The Theoi Project, "Erebos"

Nyx Nyx (Greek: Νύξ, "Night")[1] – Roman (in Latin): Nox – is the Greek goddess (or personification) of the night. A shadowy figure, Nyx stood at or near the beginning of creation, and was the mother of other personified deities such as Hypnos (Sleep) and Thanatos (Death). Her appearances are sparse in surviving mythology, but reveal her as a figure of exceptional power and beauty. She is found in the shadows of the world and only ever seen in glimpses. Mythology and literature[edit] Headline text[edit] Hesiod[edit] In his description of Tartarus, Hesiod locates there the home of Nyx,[5] and the homes of her children Hypnos and Thanatos.[6] Hesiod says further that Hemera (Day), who is Nyx's daughter, left Tartarus just as Nyx entered it; continuing cyclicly, when Hemera returned, Nyx left.[7] This mirrors the portrayal of Ratri (night) in the Rigveda, where she works in close cooperation but also tension with her sister Ushas (dawn). Homer[edit] Others[edit] Nyx in society[edit] Cults[edit]

Greek Gods Family Tree / Genealogy | ludios.org ludios.org Typhon Typhon was described in pseudo-Apollodorus, Bibliotheke, as the largest and most fearsome of all creatures. His human upper half reached as high as the stars, and his hands reached east and west. Instead of a human head, a hundred dragon heads erupted from his neck and shoulders (some, however, depict him as having a human head, with the dragon heads replacing the fingers on his hands). His bottom half consisted of gigantic viper coils that could reach the top of his head when stretched out and constantly made a hissing noise. Accounts[edit] Hesiod narrates Typhon's birth in this poem: mother Earth bore her youngest child Typhoeus of the love of Tartarus, by the aid of golden Aphrodite. —Hesiod, Theogony 820–822. Offspring[edit] Battle with Zeus[edit] Typhon started destroying cities and hurling mountains in a fit of rage. Typhon is also the father of hot dangerous storm winds which issue forth from the stormy pit of Tartarus, according to Hesiod. Origin of name[edit] Popular culture[edit]