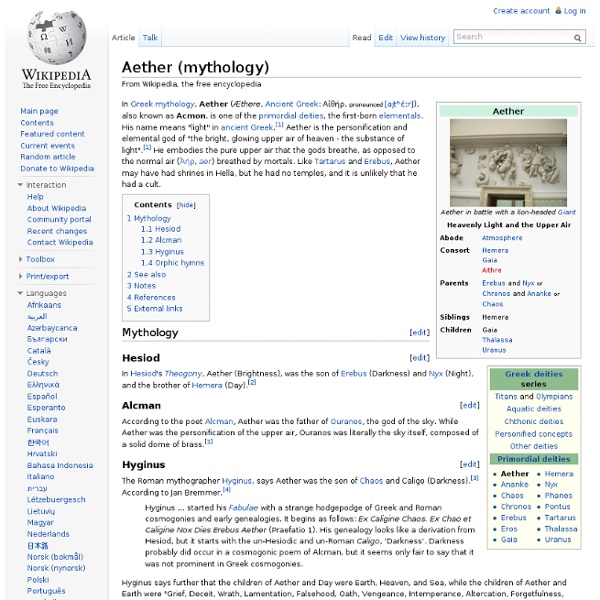 In Greek mythology, Aether or Aither (Æthere, Ancient Greek: Αἰθήρ, pronounced [aitʰɛ̌ːr]), also known as Akmon or Acmon in Latin (possibly from the same route as "Acme") is one of the primordial deities, the first-born elementals. Aether is the personification of the upper air.[1] He embodies the pure upper air that the gods breathe, as opposed to the normal air (ἀήρ, aer) breathed by mortals. Like Tartarus and Erebus, Aether may have had shrines in ancient Greece, but he had no temples and it is unlikely that he had a cult. Hyginus ... started his Fabulae with a strange hodgepodge of Greek and Roman cosmogonies and early genealogies. The fifth Orphic hymn to Aether describes the substance as "the high-reigning, ever indestructible power of Zeus," "the best element," and "the life-spark of all creatures The Theoi Project, "AITHER"

Iris (mythology) In Greek mythology, Iris (/ˈɨrɨs/; Ἶρις) is the personification of the rainbow and messenger of the gods. She is also known as one of the goddesses of the sea and the sky. Iris links the gods to humanity. She travels with the speed of wind from one end of the world to the other,[1] and into the depths of the sea and the underworld. According to Hesiod's Theogony, Iris is the daughter of Thaumas and the cloud nymph Electra. Iris is frequently mentioned as a divine messenger in the Iliad which is attributed to Homer, but does not appear in his Odyssey, where Hermes fills that role. According to Apollonius Rhodius, Iris turned back the Argonauts Zetes and Calais who had pursued the Harpies to the Strophades ('Islands of Turning'). Iris had numerous poetic titles and epithets, including Chrysopteron (Golden Winged), Podas ôkea (swift footed) or Podênemos ôkea (wind-swift footed), Roscida (dewey), and Thaumantias or Thaumantos (Daughter of Thaumas, Wondrous One).

Jupiter (mythology) The consuls swore their oath of office in Jupiter's name, and honoured him on the annual feriae of the Capitol in September. To thank him for his help (and to secure his continued support), they offered him a white ox (bos mas) with gilded horns.[10] A similar offering was made by triumphal generals, who surrendered the tokens of their victory at the feet of Jupiter's statue in the Capitol. Some scholars have viewed the triumphator as embodying (or impersonating) Jupiter in the triumphal procession.[11] During the Conflict of the Orders, Rome's plebeians demanded the right to hold political and religious office. During their first secessio (similar to a general strike), they withdrew from the city and threatened to found their own. The augures publici, augurs were a college of sacerdotes who were in charge of all inaugurations and of the performing of ceremonies known as auguria. The role of Jupiter in the conflict of the orders is a reflection of the religiosity of the Romans.

Yahweh By early post-biblical times, the name of Yahweh had ceased to be pronounced. In modern Judaism, it is replaced with the word Adonai, meaning Lord, and is understood to be God's proper name and to denote his mercy. Many Christian Bibles follow the Jewish custom and replace it with "the LORD". Name[edit] The Tetragrammaton in Paleo-Hebrew (10th century BCE to 135 CE), old Aramaic (10th century BCE to 4th century CE) and square Hebrew (3rd century BCE to present) scripts. History[edit] Origins and adoption as the God of Israel[edit] A YHD drachm, a silver coin probably struck by the Persian administration in Jerusalem (4th century BCE). The earliest putative reference to Yahweh in the historical record occurs in a list of Bedouin tribes of the Transjordan made by Amenhotep III (c. 1391- BCE - 1353 BCE) in the temple of Amon at Soleb. Yw in the Baal Cycle[edit] More recently, the damaged Ugaritic cuneiform text KTU 1.1:IV:14-15 is also included in the discussion:[30] From KTU II:IV:13-14

Sól (sun) Sól (Old Norse "Sun")[1] or Sunna (Old High German, and existing as an Old Norse and Icelandic synonym: see Wiktionary sunna, "Sun") is the Sun personified in Germanic mythology. One of the two Old High German Merseburg Incantations, written in the 9th or 10th century CE, attests that Sunna is the sister of Sinthgunt. In Norse mythology, Sól is attested in the Poetic Edda, compiled in the 13th century from earlier traditional sources, and the Prose Edda, written in the 13th century by Snorri Sturluson. In both the Poetic Edda and the Prose Edda she is described as the sister of the personified moon, Máni, is the daughter of Mundilfari, is at times referred to as Álfröðull, and is foretold to be killed by a monstrous wolf during the events of Ragnarök, though beforehand she will have given birth to a daughter who continues her mother's course through the heavens. "Wodan Heals Balder's Horse" (1905) by Emil Doepler.

Taranis Gundestrup cauldron, created between 200 BC and 300 AD, is thought to have a depiction of Taranis on the inner wall of cauldron on tile C The name as recorded by Lucan is unattested epigraphically, but variants of the name include the forms Tanarus, Taranucno-, Taranuo-, and Taraino-.[3][4] The name is continued in Irish as Tuireann, and is likely connected with those of Germanic (Norse Thor, Anglo-Saxon Þunor, German Donar) and Sami (Horagalles) gods of thunder. Taranis is likely associated with the Gallic Ambisagrus (likely from Proto-Celtic *ambi-sagros = "about-strength"), and in the interpretatio romana with Jupiter. Etymology[edit] Taranis, as a personification of thunder, is often identified with similar deities found in other Indo-European pantheons. Association with the wheel[edit] Votive wheels called Rouelles, thought to correspond to the cult of Taranis. See also[edit] [edit] Jump up ^ M. References[edit] External links[edit]

Shu (Egyptian deity) As the air, Shu was considered to be cooling, and thus calming, influence, and pacifier. Due to the association with air, calm, and thus Ma'at (truth, justice and order), Shu was portrayed in art as wearing an ostrich feather. Shu was seen with between one and four feathers. In a much later myth, representing the terrible weather disaster at the end of the Old Kingdom, it was said that Tefnut and Shu once argued, and Tefnut left Egypt for Nubia (which was always more temperate). He carries an ankh, the symbol of life. Hans Bonnet: Lexikon der ägyptischen Religionsgeschichte, Berlin 2000, ISBN 3-937872-08-6, S. 685-689 → ShuAdolf Erman: Die Aegyptische Religion, Verlag Georg Reimer, Berlin 1909Wolfgang Helck: Kleines Lexikon der Ägyptologie, 1999 ISBN 3-447-04027-0, S. 269f. → Shu

Nut (goddess) Nut (/nʌt/ or /nuːt/)[1] or Neuth (/nuːθ/ or /njuːθ/; also spelled Nuit or Newet) was the goddess of the sky in the Ennead of Egyptian mythology. She was seen as a star-covered nude woman arching over the earth,[2] or as a cow. Great goddess Nut with her wings stretched across a coffin A sacred symbol of Nut was the ladder, used by Osiris to enter her heavenly skies. This ladder-symbol was called maqet and was placed in tombs to protect the deceased, and to invoke the aid of the deity of the dead. Nut and her brother, Geb, may be considered enigmas in the world of mythology. A huge cult developed about Osiris that lasted well into Roman times. The sky goddess Nut depicted as a cow Ra, the sun god, was the second to rule the world, according to the reign of the gods. Some of the titles of Nut were: Nut was the goddess of the sky and all heavenly bodies, a symbol of protecting the dead when they enter the after life. Collier, Mark and Manley, Bill.

Thor In Norse mythology, Thor (/θɔr/; from Old Norse Þórr) is a hammer-wielding god associated with thunder, lightning, storms, oak trees, strength, the protection of mankind, and also hallowing, healing and fertility. The cognate deity in wider Germanic mythology and paganism was known in Old English as Þunor and in Old High German as Donar (runic þonar ᚦᛟᚾᚨᚱ), stemming from a Common Germanic *Þunraz (meaning "thunder"). Ultimately stemming from Proto-Indo-European religion, Thor is a prominently mentioned god throughout the recorded history of the Germanic peoples, from the Roman occupation of regions of Germania, to the tribal expansions of the Migration Period, to his high popularity during the Viking Age, when, in the face of the process of the Christianization of Scandinavia, emblems of his hammer, Mjölnir, were worn in defiance and Norse pagan personal names containing the name of the god bear witness to his popularity. Name[edit] Attestations[edit] Roman era[edit] Post-Roman Era[edit]