Bjold. Greece Sailing Tour. Month : From Adult From £795.00 (tour £699.00 plus local payment approx £96.00)From Student From £795.00 (tour £699.00 plus local payment approx £96.00)Prices in Pounds Sterling Aegina, Hydra, Koiladhia Bay, Nafplio, Spetses & Poros The sparkling waters of the Mediterranean were made for sailing and where better than on the sun-kissed Aegean Sea? 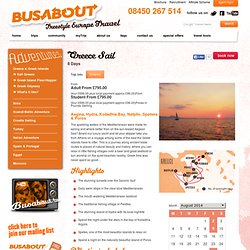 Highlights The stunning sunsets over the Saronic GulfDaily swim stops in the clear blue MediterraneanThe mouth-watering Mediterranean seafood The traditional fishing village of PerdikaThe stunning island of Hydra with its local nightlife Spend the night under the stars in the bay of Koiladhia, ArgolisSpetes, one of the most beautiful islands to relax onSpend a night on the naturally beautiful island of Poros What's included Free time Chill out on the deck of your luxury yacht Watersports and scuba diving Day 1: Athens to Perdika We set sail from Athens for the fishing village of Perdika on Aegina island. Day 2: Perdika to Hydra Day 3: Hydra to Koiladhia Bay. Greece Tours and Greek Island Hopping Trips - Busabout's Europe Tours. Greek Island Flexi-Hopper The original Guide-led flexible Greek island hopping experience. 9 days to 5 months – it’s up to you Sail Greece Spend a week on a modern luxury yacht sailing the Mediterranean Sea in style. 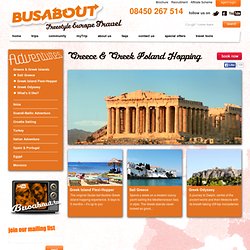 The Greek islands never looked so good... Greek Odyssey A journey to Delphi, centre of the ancient world and then Meteora with its breath-taking cliff top monasteries. 10 perfect Greek island holidays. Hydra, Saronic Gulf Why? 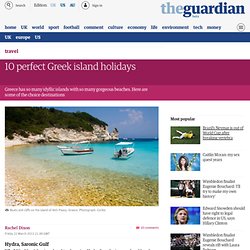 Wealthy Athenians head to charming Hydra for relaxing weekend breaks: cars, motorbikes and high-rise buildings are banned on the island. The architecture is unique for the region, with many art galleries and museums in 18th-century mansions. What to do Hydra port is the only town; the interior is largely uninhabited. Narrow streets lead from the pretty harbour to the cathedral, museum, monasteries, churches and galleries. Where to eat and stay Plenty of restaurants in Hydra serve local seafood, or try the little village of Kamini, a 40-minute walk around the headland, for traditional tavernas. How to get there There are ferries and catamarans from Piraeus, many of which continue to Spetses, another upmarket island. Finding the right Greek island.

With more than 2,000 islands, ranging from tiny atolls to the veritable continent that is Crete, maritime Greece is unmatched for sheer variety. 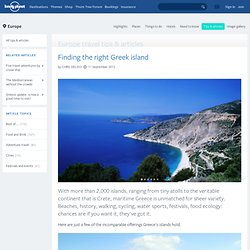 Beaches, history, walking, cycling, water sports, festivals, food ecology: chances are if you want it, they've got it. Here are just a few of the incomparable offerings Greece's islands hold. A beach in Crete by Guillaume Richer. Creative Commons ShareAlike Licence Best for beaches: Crete, Lipsi, Kefallonia, Skiathos, Mykonos Almost every Greek isle has great beaches, but few come with a Venetian castle, like laid-back Frangokastello Beach in southern Crete.

Best for history: Rhodes, Delos, Corfu, Patmos Gape at Rhodes' magnificent, walled old town, where the Knights of St John ruled from 1309-1523, and explore their quarter before visiting the 14th-century Palace of the Grand Masters. Best Island in Greece – 2014 Travelers’ Choice Awards. 62 Greek Islands Travel Guides. A Map of Greece and the Greek Islands. Sifnos. A place filled with tasty memories Sifnos, the island of flavours, is the birthplace of famous poets, like Ioannis Gryparis, Kleanthis Triantafyllou (or Rampagas) and Aristomenis Provelegios, as well as award winning chefs, like Tselementés. 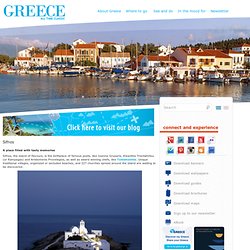 Unique traditional villages, organized or secluded beaches, and 227 churches spread around the island are waiting to be discovered. • Let’s explore the island’s picturesque settlements: Apollonía Apollonía, the capital town of Sífnos (also called Hóra), is built in the shape of an amphitheatre over three hills in the centre of the island. In every small taverna or classy restaurant in Hóra you can sample some of Sifnos’ exceptional dishes cooked by chefs who know how to tempt our taste buds. Artemónas A few kilometers away from the town lies the traditional settlement of Artemónas, famous for its neoclassic mansions and its outstanding panoramic view of the island. Kástro The visitor still enters the village from "loziés", the castle’s old entrances.