Mythology Guide - A dictionary of Greek and Roman Myths 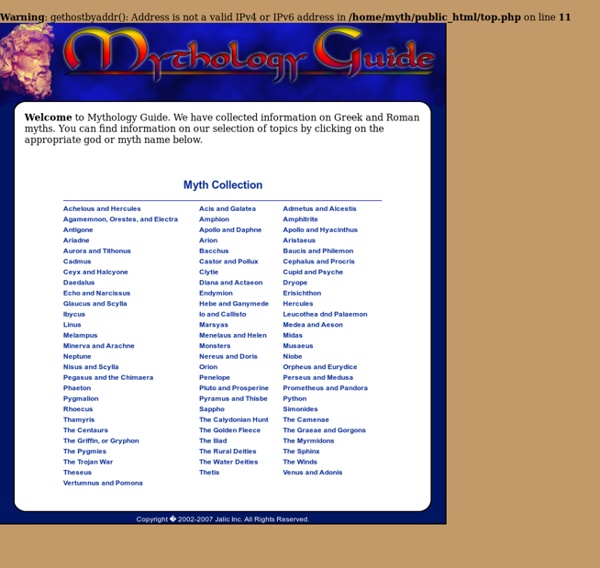 Strange Science: Mammals Perhaps as long as 5,000 years ago, a group of sailors found skulls belonging to a race of hideous giants whom the ancient Greeks named cyclops. Dwelling in their mythical land, entrusting the fate of their crops to their evil gods and devouring any humans they could find, these creatures terrified generations of Europeans. Today, relatives of these monsters can still be found — roaming the African savannas or the Indian jungles, or even eating peanuts from the hands of small children in city zoos.

one big photo & 2/14 & a picture is worth a thousand words Random photo Submit your photo Stumble Thru bluebells in halle`s forest, belgium nature photography moonlit teton range, wyoming 13 Disturbing Pieces of Art from History The media is often criticized for showing violent and disturbing imagery. Movies, TV, video games, tabletop RPGs, comic books, and various other things have all gone through periods where they're blamed for exposing children to dark and unsettling things. But as these fine art examples prove, violent and disturbing imagery is nothing new. (Obviously, this article contains some disturbing content.) 1.

Knights Templar rotten > Library > Conspiracy > Knights Templar According to legend, the Knights Templar was founded in 1118 to protect tourists headed for Jerusalem. There the small band of warrior monks established a headquarters. In due course, they somehow managed to gain possession of the Ark of the Covenant, which they hid for safekeeping. Even though the Templars swore allegiance to the Pope, their beliefs were not exactly orthodox.

Mythical Chronology of Greece This Mythical Chronology of Greece depicts the traditional chronology established for the events of ancient Greek mythology by ancient chronographers and mythographers. This list largely reflects the work of Saint Jerome, whose work in turn was based primarily on the analysis of Apollodorus, Diodorus Siculus, and Eusebius. [1] In a few cases, the chronology also reflects the opinions of more recent scholars, who have cross referenced the mythology to archeological discoveries. These interpolations are noted with italics. Although the Greeks did believe that much of their mythology was grounded in fact, this list is not intended to imply the literal existence of real-world parallels to all the characters listed below.

List of legendary creatures This is a list of legendary creatures from various historical mythologies. Entries include species of legendary creature and unique creatures, but not individuals of a particular species. A[edit] japanese garden in portland photo Random photo Submit your photo Stumble Thru nature photography Tags: park Temple Of Karnak, engraved wall Part of the Holy Land, Egypt offers a fascinating mixture of ancient pyramids, temples and other religious monuments. There are numerous possibilities to explore Egypt from desert treks to trips down the Nile or scuba diving in the Red Sea and along the Sinai coast. Cairo, which means “The Triumphant”, is home to the pyramids, sphinx and over 17 million residents within its metropolitan area. Luxor is often described as the world’s largest open air museum, built on the ancient city of Thebes. The Karnak temple complex, located near Luxor, is a collection of ancient temples, chapels and various other buildings.

Battle of Badr - SHAYKH AL ISLAM The first Revelation to God’s Messenger was the com­mand: Read! This command, coming at a time when there was nothing readily available to read, meant that believers should use their intellectual and spiritual facul­ties to discern God’s acts in the universe and His laws related to its creation and operation. Through such discernment, believers seek to purify themselves and their minds of all ignorance-based superstitions and to acquire true knowledge through observation and contemplation. Human beings are not composed only of their minds. God has endowed us with many faculties, each of which needs satisfaction. So while fe­eding our minds with the Divine “signs” in the universe, we seek to cleanse our hearts of sin.

The Battle with the Titans - Classical Mythology With his rescued siblings, Zeus had the beginnings of an army with which to challenge Cronus. However, Cronus had some difficulty in assembling his own forces. Some of the Titans refused to help him in the struggle. None of the Titanesses participated, and Oceanus, Cronus's brother, also refused to fight. Similarly, Helios, son of Hyperion, refused to take part in the war.