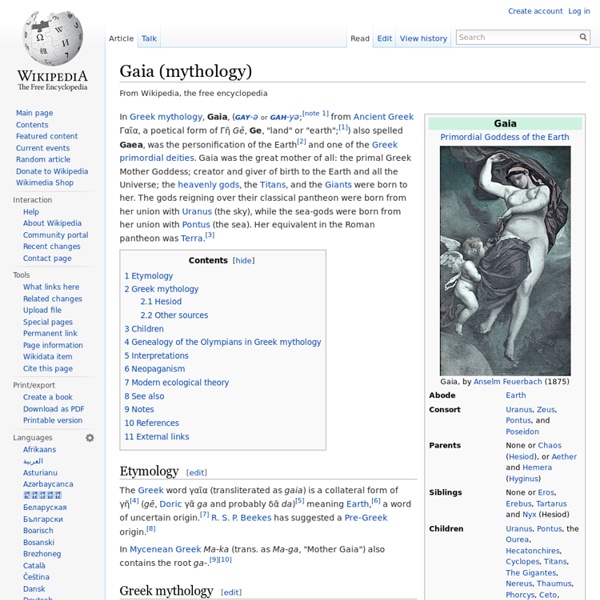 The Greek word γαῖα (transliterated as gaia) is a collateral form of γῆ[4] (gē, Doric γᾶ ga and probably δᾶ da)[5] meaning Earth,[6] a word of uncertain origin.[7] R. S. P. Beekes has suggested a Pre-Greek origin.[8] In Mycenean Greek Ma-ka (trans. as Ma-ga, "Mother Gaia") also contains the root ga-.[9][10] According to Hesiod, Gaia conceived further offspring with Uranus, first the giant one-eyed Cyclopes: Brontes ("Thunder"), Steropes ("Lightning") and Arges ("Bright");[16] then the Hecatonchires: Cottus, Briareos and Gyges, each with a hundred arms and fifty heads.[17] As each of the Cyclopes and Hecatonchires were born, Uranus hid them in a secret place within Gaia, causing her great pain. Because Cronus had learned from Gaia and Uranus, that he was destined to be overthrown by his own child, Cronus swallowed each of the children born to him by his Titan sister Rhea. With Gaia's advice[21] Zeus defeated the Titans. In classical art Gaia was represented in one of two ways.

Apollo (Crown) Greek god Apollo[a] is one of the Olympian deities in classical Greek and Roman religion and Greek and Roman mythology. The national divinity of the Greeks, Apollo has been recognized as a god of archery, music and dance, truth and prophecy, healing and diseases, the Sun and light, poetry, and more. One of the most important and complex of the Greek gods, he is the son of Zeus and Leto, and the twin brother of Artemis, goddess of the hunt. Seen as the most beautiful god and the ideal of the kouros (ephebe, or a beardless, athletic youth), Apollo is considered to be the most Greek of all the gods. As the patron deity of Delphi (Apollo Pythios), Apollo is an oracular god—the prophetic deity of the Delphic Oracle. Apollo is an important pastoral deity, and was the patron of herdsmen and shepherds. Etymology Apollo, fresco from Pompeii, 1st century AD A Luwian etymology suggested for Apaliunas makes Apollo "The One of Entrapment", perhaps in the sense of "Hunter".[24] Greco-Roman epithets Sun

Tartarus Greek mythology[edit] In Greek mythology, Tartarus is both a deity and a place in the underworld. In ancient Orphic sources and in the mystery schools, Tartarus is also the unbounded first-existing entity from which the Light and the cosmos are born. As for the place, Hesiod asserts that a bronze anvil falling from heaven would fall nine days before it reached the earth. Originally, Tartarus was used only to confine dangers to the gods of Olympus. According to Plato (c. 427 BC), Rhadamanthus, Aeacus and Minos were the judges of the dead and chose who went to Tartarus. Plato also proposes the concept that sinners were cast under the ground to be punished in accordance with their sins in the Myth of Er. There were a number of entrances to Tartarus in Greek mythology. Roman mythology[edit] Biblical Pseudepigrapha[edit] Tartarus also appears in sections of the Jewish Sibylline Oracles. New Testament[edit] Footnotes [1] 2:4 Greek Tartarus See also[edit] Notes[edit] References[edit]

Iara (mythology) Iara was a beautiful young woman, sometimes described as having green hair and light skin, connected to a freshwater water body[clarification needed] (the Tupi word y did not have a distinct meaning, being used in general for any such place) who would sit on a rock by the river combing her hair or dozing under the sun. When she felt a man around she would start to sing gently to lure him. Once under the spell of the Iara a man would leave anything to live with her underwater forever, which was not necessarily a bad thing, as she was pretty and would cater for all needs of her lover for the rest of his life. Iaras are immortal (like the nymphs of Greek mythology), but her lovers do age and die, which means that they live most of eternity alone. The legend of the Iara was one of the usual explanations for the disappearance of those who ventured alone in the jungle. Iara (or Yara) is also a very popular female name in Brazil.

The Inner Earth & Realm of Aghartha Aghartha In The Hollow Earth! By Dr Joshua David Stone The biggest cover-up of all time is the fact that there is a civilization of people living in the center of Earth, whose civilization's name is known as "Aghartha". This may be hard for some of you to believe. I know it was for me at first, however, I now have an absolute knowingness of the truth of this. To begin with, the Buddhists, in their theology fervently believe in its existence. The famous Russian channel, Nicholas Roerich, who was a channel for the Ascended Master, El Morya, claimed that Lhasa, the capital of Tibet, was connected by a tunnel with the inner earth, Shamballa. The Indian epic, the Ramayana and the Bhagavad Gita are the two most famous texts of India. The first public scientific evidence occurred in 1947 when Rear Admiral Richard E. His plane was finally greeted by flying machines, the type he had never seen before. In January, 1956, Admiral Byrd led another expedition to the Antarctic and/or the South Pole.

Ancient Greece - history, mythology, art, culture and architectu Inanna Inanna (/ɪˈnænə/ or /ɪˈnɑːnə/; Cuneiform: 𒀭𒈹 DMUŠ3; Sumerian: Inanna; Akkadian: Ištar; Unicode: U+12239) is the Sumerian goddess of love, fertility, and warfare, and goddess of the E-Anna temple at the city of Uruk, her main centre. Part of the front of Inanna's temple from Uruk Origins[edit] Etymology[edit] Inanna's name derives from Lady of Heaven (Sumerian: nin-an-ak). Worship[edit] One version of the star symbol of Inanna/Ishtar Iconography[edit] Inanna's symbol is an eight-pointed star or a rosette.[10] She was associated with lions – even then a symbol of power – and was frequently depicted standing on the backs of two lionesses. Inanna as the star, Venus[edit] Inanna was associated with the celestial planet Venus. Inanna's Descent to the Underworld explains how Inanna is able to, unlike any other deity, descend into the netherworld and return to the heavens. Character[edit] Inanna is the goddess of love – but not marriage. Myths[edit] Enmerkar and the Lord of Aratta[edit]

Eros Eros (/ˈɪərɒs/ or US /ˈɛrɒs/; Ancient Greek: Ἔρως, "Desire"), in Greek mythology, was the Greek god of love. His Roman counterpart was Cupid[2] ("desire"). Some myths make him a primordial god, while in other myths, he is the son of Aphrodite. Cult and depiction[edit] Eros appears in ancient Greek sources under several different guises. In the earliest sources (the cosmogonies, the earliest philosophers, and texts referring to the mystery religions), he is one of the primordial gods involved in the coming into being of the cosmos. A cult of Eros existed in pre-classical Greece, but it was much less important than that of Aphrodite. Primordial god[edit] Homer does not mention Eros. Son of Aphrodite[edit] [Hera addresses Athena:] “We must have a word with Aphrodite. "Once, when Venus’ son [Cupid, aka Eros] was kissing her, his quiver dangling down, a jutting arrow, unbeknown, had grazed her breast. Eros and Psyche[edit] In Greek mythology, Psyche was the deification of the human soul. Sources

Synecdoche A synecdoche (/sɪˈnɛkdəkiː/, si-NEK-də-kee; from Greek synekdoche (συνεκδοχή), meaning "simultaneous understanding") is a figure of speech[1][2] in which a term for a part of something refers to the whole of something, or vice-versa.[3][4] An example is referring to workers as hired hands.[5][6] Similar figures of speech[edit] Synecdoche is a rhetorical trope and a type of figurative speech[7] similar to metonymy—a figure of speech in which a term that denotes one thing is used to refer to a related thing.[1] Indeed, synecdoche is sometimes considered a subclass of metonymy. It is more distantly related to other figures of speech, such as metaphor.[8] More rigorously, metonymy and synecdoche can be considered sub-species of metaphor, intending metaphor as a type of conceptual substitution (as Quintilian does in Institutio oratoria Book VIII). Etymology[edit] Use[edit] Synecdoche is often used as a type of personification, by attaching a human aspect to a non-human thing. Examples[edit]

Erebus In Greek literature the name Erebus is also used of a region of the Greek underworld where the dead pass immediately after dying, and is sometimes used interchangeably with Tartarus.[3][4][5][6][7] The perceived meaning of Erebus is "darkness"; the first recorded instance of it was "place of darkness between earth and Hades". Hebrew עֶרֶב (ˤerev) 'sunset, evening' is sometimes cited as a source.[3][8] However, an Indo-European origin, at least for the name Ἔρεβος itself, is more likely. The Roman writer Hyginus, in his Fabulae, described Erebus as the father of Geras, the god of old age.[10] References[edit] Notes Jump up ^ Ἔρεβος. Sources External links[edit] The Theoi Project, "Erebos"