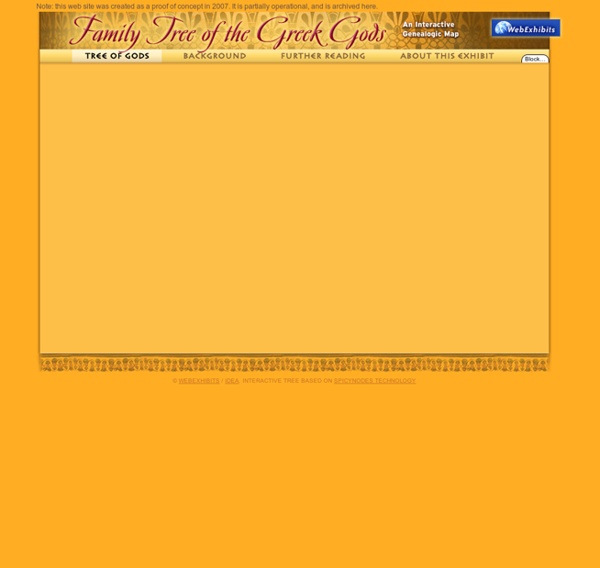 EyeWitness To The Middle Ages and Renaissance Life in a Christian Monastery, ca. 585"When he was dead his body was not placed with the bodies of the brethren, but a grave was dug in the dung pit, and his body was flung down into it. . . " Crime and punishment in a medieval monastery: the monastery's Abbott provides insight into the monastic life. The Vikings Discover America, ca. 1000"There was no want of salmon either in the river or in the lake." Five hundred years before Columbus, the Vikings discover a New World. Family tree of the Greek gods Key: The essential Olympians' names are given in bold font. See also List of Greek mythological figures

Many Myths, Greek Mythology - Ancient Greece for Kids The ancient Greeks told stories about their gods. These stories are called myths (short for mythology, or stories about gods.) Stories about the ancient Greek gods are still told today. Each storyteller told the stories in their own way, but whatever power and personality a god had was consistent from story to story. For example, Zeus was the king of all the gods, and only Zeus could throw lightning bolts. Greek Mythology Gods Olympians The Olympians are a group of 12 gods who ruled after the overthow of the Titans. All the Olympians are related in some way. They are named after their dwelling place Mount Olympus. Zeus Zeus overthew his Father Cronus.

Greek Gods The Greeks were polytheistic in their religious beliefs. Polytheistic means they believed in and worshiped many different gods. In Greek mythology, the gods often represented different forms of nature. Their religion/mythology had no formal structure with the exception of various festivals held in honor of the gods. The Historical Merlin Illustration of Merlin from Tennyson's Idylls of the King, 1898. In legend Merlin was not only depicted as a wizard but also a bard - a poet and writer of songs. In the Dark Ages bards were accredited with the gift of prophecy.

Mythical Chronology of Greece This Mythical Chronology of Greece depicts the traditional chronology established for the events of ancient Greek mythology by ancient chronographers and mythographers. This list largely reflects the work of Saint Jerome, whose work in turn was based primarily on the analysis of Apollodorus, Diodorus Siculus, and Eusebius. [1] In a few cases, the chronology also reflects the opinions of more recent scholars, who have cross referenced the mythology to archeological discoveries. These interpolations are noted with italics. Although the Greeks did believe that much of their mythology was grounded in fact, this list is not intended to imply the literal existence of real-world parallels to all the characters listed below. The dates below are approximate.