Why Google+ Is the Best Social Platform for Content Marketers 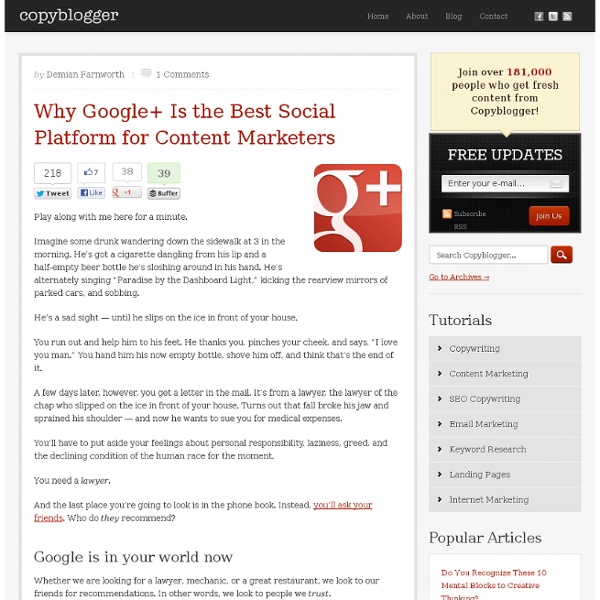 Improve Your Google Search Skills [Infographic] Don’t limit yourself to just plugging in simple search terms to Google; check out this infographic and learn a search string search or two. You don’t need to limit yourself to searching just for simple strings; Google supports all manner of handy search tricks. If you want to search just HowToGeek.com’s archive of XBMC articles, for example, you can plug in site:howtogeek.com XBMC to search our site. SEO Industry Survey 2012 - How Google’s Free Tools Dominate Online Marketing Industry Back in March in this year, SEOmoz conducted an Industry Survey that grabbed attention of almost 6500 people in more than 100 countries. From independent consultants to agency SEOs to in-house marketers, they got to see responses from a wide swath of the industry's demographics. Almost half of the respondents (47.3 percent) were from the U.S., and 77 percent were males. By looking at the Industry Survey it emphasizes the fact that traditional SEO is alive and well being the 2nd highest-demand service area (71% of respondents), and SEO is the top priority for both individuals and their teams. Organizations are heavily focused on Online Marketing where SEO, Social Media & Analytics, two pretty big buckets.

Free and best way to Check Duplicate Content ~ MY SEO PRANK After the updation of Google Panda Algorithm in 24 Feb 2011 the basic scenario of panda algorithm is to unique content is the first priority of any website and the second one is if any website have broken link then it could be penalized by Panda Algorithm. And you could drop your ranking. So After Panda Algorithm you can't use duplicate content in your website. How To Hack Google Plus For SEO Value People tend to think of Google Plus as just another social network, built as Google’s challenge to Facebook’s incredible growth over the past decade. What most people don’t realize, however, is the SEO value that makes Google+ so much more than just a social networking platform. How so? Studies show a powerful correlation between search rankings and the number of Google +1's received by a URL. Searchmetrics found Google +1's to be the most highly correlated factor to search result rankings, and Moz's 2013 scientific correlation study placed Page Authority just above +1's at the top of all correlation factors. It's probably not a surprise that activity on Google's social network influences Google search results, but the degree of correlation is astonishingly high.

How To Use Google For Hacking Google serves almost 80 percent of all search queries on the Internet, proving itself as the most popular search engine. However Google makes it possible to reach not only the publicly available information resources, but also gives access to some of the most confidential information that should never have been revealed. In this post I will show how to use Google for exploiting security vulnerabilities within websites. The following are some of the hacks that can be accomplished using Google. Ultimate Guide to Google Plus I’ve seen quite a few people who don’t understand Google Plus or think Google Plus is some sort of wasteland with giant swaths of inactivity. I was one of these people until I decided to dive in and really explore the social network and become active on there to see what this G+ thing is all about. The end result is this guide, a complete Google Plus guide for the person who is just getting started, or quite simply, started but staring at a boring feed with zero activity. Take a look at the sections below and click any section that has your interest. The Google Plus Beginner Guide Sections When browsing this guide, you can click the below links to jump to the section you are interested in.

100+ Google Tricks That Will Save You Time in School – Eternal Code [via onlinecolleges.net] With classes, homework, and projects–not to mention your social life–time is truly at a premium for you, so why not latch onto the wide world that Google has to offer? From super-effective search tricks to Google hacks specifically for education to tricks and tips for using Gmail, Google Docs, and Google Calendar, these tricks will surely save you some precious time. Search Tricks These search tricks can save you time when researching online for your next project or just to find out what time it is across the world, so start using these right away. Google+ Scam Spreading Via Fake Invites [WARNING] Using Google+? Add Mashable to your circles. You'll get the latest about new Google+ features and tips and tricks for using the platform as well as top social media and technology news. Malicious hackers have targeted Google's social networking service, Google+, for the first time in a scam that involves fake invites to the service, Naked Security reports. The fake invites are spreading through email, and they look very similar to the actual invites to the service, down to the email address which seems to be coming from a Google+ member.

Personal B2B PPC – 5 Things You Need to Ensure Success Oh, how the buying process has changed with B2B. According to Sirius Decisions, more than 67 percent of the customer’s buying journey is now done digitally, and 57 percent of the actual purchase decision is complete before a customer even contacts a supplier. And why is this? Because marketing is no longer about B2B, or even B2C. Marketing is now about being there when the buyer is searching – it’s about "B2Me." The Beginner's Guide to Google+ When Google+ entered the social space in 2011, it was met largely with skepticism. Joining a crowded field with platforms such as Facebook and Twitter, many users questioned the need for another social network. But roughly two years later, Google+ has established itself as the second-largest social media site in the world and boasts a monthly active user base of 235 million. And some of the products that Google built into the platform, such as Hangouts and Communities, along with its added integration in Google News that can benefit an active poster, have made Google+ an intriguing network for all users. If you're a newbie to Google+, these tips will help you get started. Creating a Google Account

40 Google Plus Tips for Newbies Ok, so at this point, we are all newbies at Google Plus, right? At least if you got in recently via a Google Plus invite. At this point I’ve spent a decent amount of time with it and have concluded that Google has finally made a positive mark in social networking. It’s still early, but there is a lot of excitement around Google+ by those who have jumped on early, and for good reason. 4 Tips to Improve Your Product Feed for Advertising We are now in era in performance marketing where the quality of a marketer’s own data is a critical driver of advertising success. This is particularly evident in retail, where product listing ads (PLA) are often the largest share of the paid media budgets. Those ads are powered by the content that lives in the retailer’s product feed. Due to the fact ad content is dependent on the product feed, the marketing department needs to take a more active role in the development and management of the feed content, much like it has done with SEO over the past few years. Here are some easy steps (often only one-time work!)

How To Customize Google+ Not crazy about Google's design choices for Google+? Using scripts for Greasemonkey, Extensions for Chrome, Firefox Add-ons, and other browser plug-ins, you can make some pretty wild changes to the look and feel of the site. You can also take a more utilitarian route and take advantage of code that can translate posts from directly within Google+ or port all your Facebook photos to Google+ Photo (i.e., Picasa), where storage is virtually unlimited if you have a Google+ account (photos 2048 x 2048 pixels and smaller don't count toward your 1GB allowance). Check out these 16 scripts and tools that modify or enhance Google+ 1. Google Plus Header Hider (Mozilla) hides the black bar at the top of the screen.