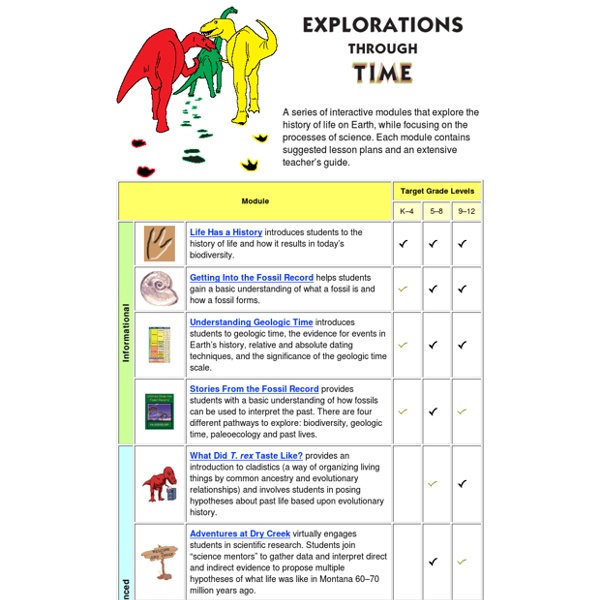 Click and Learn BioInteractive Search Results Series Where and when did humans arise? What distinguishes us from other species? Did our distant ancestors look and behave like us? How has the amazing diversity of plants and animals evolved? What can fossils, butterflies, and stickleback fish tell us about the deep common ancestry of all living forms? Leading evolution educator Ken Miller discusses the controversy surrounding the teaching of evolution. Four talks focus on sex determination—the molecular and genetic mechanisms that determine whether an organism will be male, female or a hermaphrodite. This series of short films has been crafted to engage students with memorable examples of the evolutionary process in action. Has Earth changed over deep time? The richness and diversity of life raises two of the most profound questions in biology: How do new species form? The most profound discoveries in science have cracked longstanding mysteries and altered how we think about life on our planet.

BioInteractive Search Results Lectures How reasoning and evidence are used to understand human evolution. Genetic evidence shows that humans evolved in Africa and continue to evolve. Stone tools are well-preserved evidence of past human activity. The hominid fossil record of the past six million years gives us surprising insights into the path of human evolution. How humans perceive bitter taste, and the evolution of taste perception. How Darwin came to publish The Origin of Species, and examples of how quickly evolution can change a population. Comparing the artificial selection of dogs and corn with the natural selection of the stickleback fish. The genetic mechanisms by which evolution occurs, and an overview of the evidence for evolutionary theory. How and why butterflies and fruit flies got their spots, and the fossil record for human evolution. A discussion on reconciling religion and science with students, the lecturers, and guest speakers. Microbes have been the dominant life form throughout Earth's history. Dr. Dr.

Understanding Evolution The bacteria that changed the world - May, 2017 The make-up of Earth's atmosphere, once the domain of Earth science textbooks, has become an increasingly "hot" news topic in recent decades, as we struggle to curb global warming by limiting the carbon dioxide that human activity produces. While the changes that humanity has wrought on the planet are dramatic, this isn’t the first time that one species has changed Earth’s atmosphere. Three billion years ago, there was no free oxygen in the atmosphere at all. Life was anaerobic, meaning that it did not need oxygen to live and grow. That all changed due to the evolution of Cyanobacteria, a group of single-celled, blue-green bacteria. Read the rest of the story here | See the Evo in the News archive

100 Years of Breed “Improvement” | Science of Dogs For the sake of honest disclosure, I will admit to owning “purebreds” (the ‘pureness’ of purebreeds is a discussion for another time) but I also have mutts. All the dogs I’ve had since childhood had a few things in common, they were friendly, prey driven, ball-crazy, intense, motivated, athletic (crazy dogs are easier to train) and none had intentionally bred defects. I would never buy/adopt a dog whose breed characteristics exacted a health burden.(Asher 2009). That just incentivizes people to breed more of these intentionally unhealthy animals. The dogs on the left are from the 1915 book, ‘Breeds of All Nations‘ by W.E. It seems incredible that at one time the Bull Terrier was a handsome, athletic dog. The Basset Hound has gotten lower, has suffered changes to its rear leg structure, has excessive skin, vertebra problems, droopy eyes prone to entropion and ectropion and excessively large ears. A shorter face means a host of problems. Once a noble working dog, the modern St. Like this:

Cut and Run Legions of athletes, sports gurus, and scientists have tried to figure out why Kenyans dominate long-distance running. In this short, we stumble across a surprising, and sort of terrifying, explanation. At the 1968 summer Olympics in Mexico City, Kipchoge Keino overcame a gall bladder infection to win gold in the 1500 meter race. David Epstein and John Manners help Greg untangle a web of potential factors - from something in the cornmeal to simple economics. Short Films “Film is a powerful way to tell stories. … The right story, told well, can be engaging, informative, and memorable.” —Sean B. Carroll HHMI’s series of short films for the classroom brings fascinating stories of science and scientists to students and teachers. The films aim to bring important scientific advances to life with concrete examples of how science works, how evidence is weighed and tested, and how conclusions are reached. These compelling stories, in fields ranging from evolutionary biology and genetics to earth science, feature leading scientists and stunning locations around the world. Importantly, each film is accompanied by a collection of supporting materials, including film guides, quizzes, hands-on activities, and lesson plans, that teachers use to increase the impact of the films in their instruction. The films and accompanying resources are available for download at BioInteractive.org.

Origins: Series Overview Origins: Back to the Beginning September 29, 2004 NEIL deGRASSE TYSON (Astrophysicist): A hellish, fiery wasteland, a molten planet hostile to life, yet somehow, amazingly, this is where we got our start. How? How did the universe, our planet, how did we ourselves come to be? Right now, we're all eavesdropping on the birth pangs of the cosmos. DAVID SPERGEL (Princeton University): ...how big it is, how old it is, what's it made of, and what were the processes that made galaxies, that made us. NEIL deGRASSE TYSON: So a furious race is on to solve the ultimate mystery. ANTHONY READHEAD (California Institute of Technology): The spirit of competition is one of the things, of course, that drives scientists. Keep our fingers crossed. NEIL deGRASSE TYSON: And as our new vision of the universe emerges, strange ideas reveal themselves. STAN WOOSLEY (University of California, Santa Cruz): Stars are the ultimate alchemist. NEIL deGRASSE TYSON: Those elements are the building blocks of life. Hello.

How We Got Here: An Inquiry-Based Activity About Human Evolution Rebecca M. Price + Author Affiliations E-mail: becca.price@uwb.edu Show your students the face of a baby chimpanzee, and they will be startled and amazed by how human she is (see the photo). Students spend the majority of class time testing the hypothesis that the evolution of skull shape within the human lineage took place largely by truncating the development of a chimpanzee-like ancestor. This learning module is flexible; one can choose learning goals that are appropriate to the course content (see the table). Step 1. Step 2. Chimpanzee. The startling similarities between baby chimpanzees and humans engage students in the scientific process. Step 3. Step 4. Three different inquiry cycles. The steps targeting the 5e inquiry cycle (dark colors) are shown; they may also include secondary foci (light colors). Step 5. Step 6. Step 7. Step 8. Step 9. Steps 1 to 9 are framed by testing a hypothesis about the morphology of the human ancestor. A modifiable learning module. About the author

Evolution: Library: Threat of Tuberculosis It's sobering to realize that the ancient scourge, tuberculosis, which has been found in 2,000-year-old mummies, remains a global health threat despite modern medicine. In fact, TB is the leading infectious disease killer in the world, causing nearly 3 million deaths in 1996. Millions of people -- fully one-third of the world's population -- are infected with the TB bacterium. Five to 10 percent of those will develop the active disease, for reasons we only partially understand. The bacteria can lie dormant for many years, and become active when the host is weakened by factors such as stress, poor nutrition, diabetes, or HIV infection. Once active, TB destroys tissue in the lungs and becomes contagious. Antibiotics and public health measures failed to wipe out TB, although until the mid-1980s its rates had been brought very low in the developed world. Several drugs can cure TB, but only if they are taken for many months. Russian prisons are a major source of multi-drug-resistant TB.

The Endosymbiosis Theory: Evolution of Cells - Free Intro to Biology Video Evolutionary Chimera Several mythological creatures are combinations of animals. For example, the griffin is a combination of a lion and an eagle, while the jackalope is combination of a jackrabbit and an antelope. The most notorious combination of animals is that of a lion, serpent and goat. While this may seem like an odd combination, in Greek mythology, it was known as the Chimera. Cells Before we can look at how current cells evolved from ancient cells, we first need to talk a little bit about cells themselves. Prokaryotic cells are simple cells with no membrane-bound organelles. Eukaryotic cells are complex cells with membrane-bound organelles and a nucleus. Eukaryotic cells are the cells that make up our bodies. First, we know that they have a nucleus. Endosymbiosis Now that we know about both prokaryotic and eukaryotic cells, let's look at the endosymbiosis theory. Now, this may have been intentional or accidental. Evidence for Endosymbiosis Lesson Summary

Cosmos A Space Time Odyssey - Some of the Things That Molecules Do Season 1 Full Episode 2 Description Duration : 42:13 — Added 11 months ago National Geographic Channel Presents the National Geographic Channel - Cosmos A Space Time Odyssey Season 1 Full Episode 2 Some of the Things That Molecules Do As Aired By National Geographic Channel on 16 March 2014 The episode covers several facets of the origin of life and evolution. Tyson describes both artificial selection via selective breeding, using the example of mankind’s domestication of wolves into dogs, and natural selection that created species like polar bears. Tyson uses the Ship of the Imagination to show how DNA, genes, and mutation work, and how these led to the diversity of species as represented by the Tree of life, including how complex organs such as the eye came about as a common element. Tyson describes extinction of species and the five great extinction events that wiped out numerous species on Earth, while some species, such as the tardigrade, were able to survive and continue life. Video Link Embed Video x