Thou shalt not commit logical fallacies 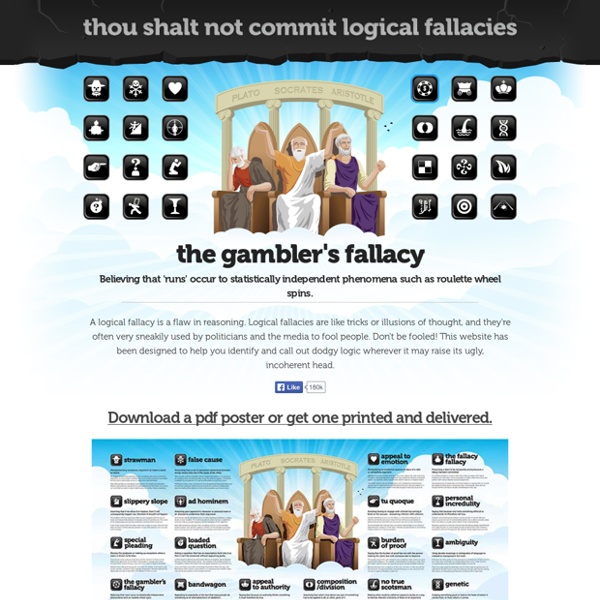 Asserting that if we allow A to happen, then Z will consequently happen too, therefore A should not happen. A logical fallacy is a flaw in reasoning. Logical fallacies are like tricks or illusions of thought, and they're often very sneakily used by politicians and the media to fool people. Don't be fooled! This website has been designed to help you identify and call out dodgy logic wherever it may raise its ugly, incoherent head. Here are some reasons you might want to order one of these pretty great posters:

Romanticism Defining Romanticism[edit] Basic characteristics[edit] Defining the nature of Romanticism may be approached from the starting point of the primary importance of the free expression of the feelings of the artist. The importance the Romantics placed on untrammelled feeling is summed up in the remark of the German painter Caspar David Friedrich that "the artist's feeling is his law".[7] To William Wordsworth poetry should be "the spontaneous overflow of powerful feelings".[8] In order to truly express these feelings, the content of the art must come from the imagination of the artist, with as little interference as possible from "artificial" rules dictating what a work should consist of.

Consequentialism FAQ The Consequentalism FAQ (Formatted Answers and Questions) Table of Contents 0: Introduction1: Whirlwind Metaethics2: Morality Must Live in the World3: Assign Value to Other People4: In Which We Finally Get to Consequentialism5: The Greatest Good for the Greatest Number6: Rules and Heuristics7: Problems and Objections8: Why it Matters 0.1: Who are you? The White Rhino: A Chicago Latino English Teacher Part I: Introduction--What inspired my argumentative response? For decades, too many high-school teachers have been instilling persuasive writing skills by teaching students the five-paragraph essay. You know it:

Graphing Charaters Here’s an idea to integrate two-dimensional graphing with deep character analysis. Use the right characters, and you’ve got an exciting debate on your hands. Plus, it leads to a beautiful product that’s perfect for Open House. Two Criteria Come up with two ways of ranking characters, such as “morality” and “physical strength”. Pick some characters that have different levels of these characteristics.

6 interview questions that will make any employer want to hire you This story originally ran on PR Daily in March 2013. Common advice among job seekers is that when you attend an interview, you need to interview the employer right back. After all, you're the one who will potentially fill the position. You need to know if it's going to be a good fit, right? While salary ranges, benefits and schedule flexibility are important details you deserve answers to, hiring managers don't appreciate questions like those until at least your second interview (or maybe even after they make you an offer). During your first interview, the "impress me" dance is still in full swing.

Ancien Régime This article is about the administrative, judicial, and ecclesiastic structures of the Kingdom of France in the pre-revolutionary period. For a general history of France in this period, see Early modern France. For the political history of France in this period, see Kingdom of France. Much of the medieval political centralization of France had been lost in the Hundred Years' War, and the Valois Dynasty's attempts at re-establishing control over the scattered political centres of the country were hindered by the Wars of Religion. Much of the reigns of Henry IV, Louis XIII and the early years of Louis XIV were focused on administrative centralisation. The need for centralization in this period was directly linked to the question of royal finances and the ability to wage war.

The Non-Libertarian FAQ The Non-Libertarian FAQ (aka Why I Hate Your Freedom) Version 2.0: Now With More Statism! Contents 0. Introduction Quality Rubrics / Checklist_v_Rubric What deserves a rubric? A good starting point when thinking about what tasks deserves a rubric, is to reflect on the nature of the task. What are your goals for you and your students? If your goal is to provide answers to the following questions, a checklist or scoring chart may be the best assessment tool: 21st Century Educator Recently I noticed that Google forms has an option to add multiple pages to a form, and to go to pages based on the responses to multiple choice questions added to each page. It occurred to me that an immediate use of this would be to construct a "choose your own adventure" story which I always loved reading when I was a student. The basic idea is, the students construct a story where the next page in the story depends on a decision made by the person reading the story.

How to Do Laundry For Men One of the first things many young men will be confronted with doing for themselves for the first time when they leave home is their laundry. It’s not exactly rocket science (none of these 31 basic life skills will be, so let’s retire that caveat today), but there is a surprising amount to it — believe or not, whole books have been written on the subject! Today we’ll cover the essential basics in an easy-to-follow question and answer format. It’s an important skill to learn not just because everybody has to do it every single week without fail, but when you know how to do it properly, you won’t ruin your clothes or wear them out too quickly — something a young man on a budget can ill-afford to do.

Johann Friedrich Struensee Count Johann Friedrich Struensee (5 August 1737 – 28 April 1772) was a German doctor. He became royal physician to the mentally ill King Christian VII of Denmark and a minister in the Danish government. He rose in power to a position of "de facto" regent of the country, where he tried to carry out widespread reforms. His affair with Queen Caroline Matilda ("Caroline Mathilde") caused scandal, especially after the birth of a daughter, Princess Louise Augusta, and was the catalyst for the intrigues and power play that caused his downfall and dramatic death. He died unmarried. Upbringing and early career[edit]

Teaching Authentic Writing in a Socially Mediated World - Getting Smart by Susan Lucille Davis - common core, DigLN, engchat Email Share June 28, 2012 - by Susan Lucille Davis 122 Email Share I need to confess. As an English/Language Arts teacher with nearly three decades of experience teaching writing in her professional backpack, I am supposed to know what I am doing. But the radical changes in the way we communicate in contemporary society have led me to dive deep into an existential crisis.

Interactive Folio: Romeo and Juliet Welcome to the Interactive Folio/Reader and Study Guide version of Romeo and Juliet created by the Canadian Adaptations of Shakespeare Project and originally released in 2007. We're pleased to announce that we've just released the new, updated version of the play as an iOS app. in collaboration with InteractiveReaders Inc. To access the Romeo+Juliet app. (compatible with the iPad, iPhone, and the iPod touch) click here or on the image below. You’ll find it to be quite simply the most interactive and sophisticated edition of Romeo and Juliet ever created: use it as a study guide and teaching tool. Read the play, read its English source texts, read critical materials on the play, explore Shakespeare's vocabulary, and experience a full range of multimedia associated with the play.