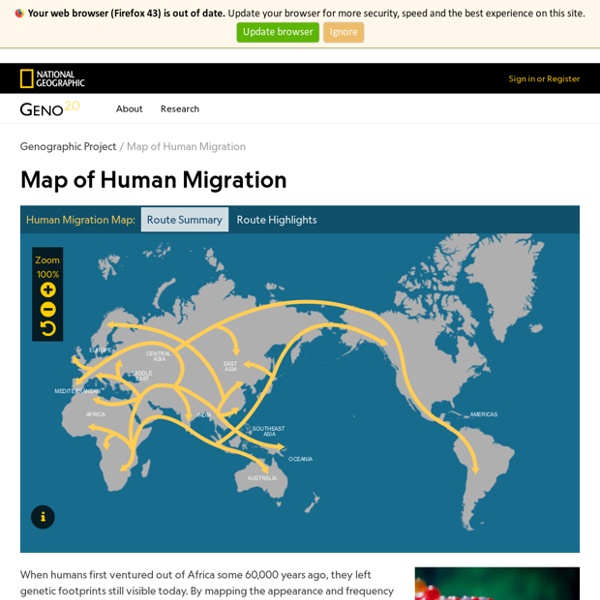 When humans first ventured out of Africa some 60,000 years ago, they left genetic footprints still visible today. By mapping the appearance and frequency of genetic markers in modern peoples, we create a picture of when and where ancient humans moved around the world. These great migrations eventually led the descendants of a small group of Africans to occupy even the farthest reaches of the Earth. Our species is an African one: Africa is where we first evolved, and where we have spent the majority of our time on Earth. The earliest fossils of recognizably modern Homo sapiens appear in the fossil record at Omo Kibish in Ethiopia, around 200,000 years ago. Although earlier fossils may be found over the coming years, this is our best understanding of when and approximately where we originated. According to the genetic and paleontological record, we only started to leave Africa between 60,000 and 70,000 years ago. The story doesn’t end there, of course.

Earth - Your life on earth Explore BBC Earth's unique interactive, personalised just to you. Find out how, since the date of your birth, your life has progressed; including how many times your heart has beaten, and how far you have travelled through space. Investigate how the world around you has changed since you've been alive; from the amount the sea has risen, and the tectonic plates have moved, to the number of earthquakes and volcanoes that have erupted.

The Origin of Us Who are we? Where did we come from? Why are we here? The age-old question of our origin has been baffling mankind for centuries. For most of our history, it was widely accepted that man had been created by an omnipresent, omnipotent, God or Gods. Human Y-chromosome DNA haplogroup Dominant Y-chromosome haplogroups in pre-colonial world populations, with possible migrations routes according to the Coastal Migration Model. In human genetics, a human Y-chromosome DNA haplogroup is a haplogroup defined by differences in the non-recombining portions of DNA from the Y chromosome (called Y-DNA). It represents human genetic diversity based on single-nucleotide polymorphisms (SNPs) on the Y chromosome.[1] Y-DNA haplogroups represent major branches of the Y-chromosome phylogenetic tree. Y-chromosomal Adam is the name given by researchers to the patrilineal most recent common ancestor of all living humans at the root of this tree.

2017 Report on Internal Displacement In 2016, conflict and violence displaced more people in Sub-Saharan Africa than in the Middle East, according to a report released today by the Internal Displacement Monitoring Centre (IDMC) and the Norwegian Refugee Council (NRC). Of the 6.9 million new internal displacements by conflict in 2016, 2.6 million took place in Sub-Saharan Africa, and 2.1 million in the Middle East and North Africa, according to the Global Report on Internal Displacement. The Democratic Republic of the Congo was the country worst affected, with a spike of 922,000 new displacements during the year. Next were Syria (824,000), Iraq (659,000), Afghanistan (653,000), Nigeria (501,000) and Yemen (478,000). “Certain countries drop off the international agenda only to re-emerge a few years later with significant numbers of new displacements,” said Alexandra Bilak, Director of IDMC. Globally, conflict, violence and disasters caused 31.1 million new instances of internal displacement in 2016.