Windows to the Universe 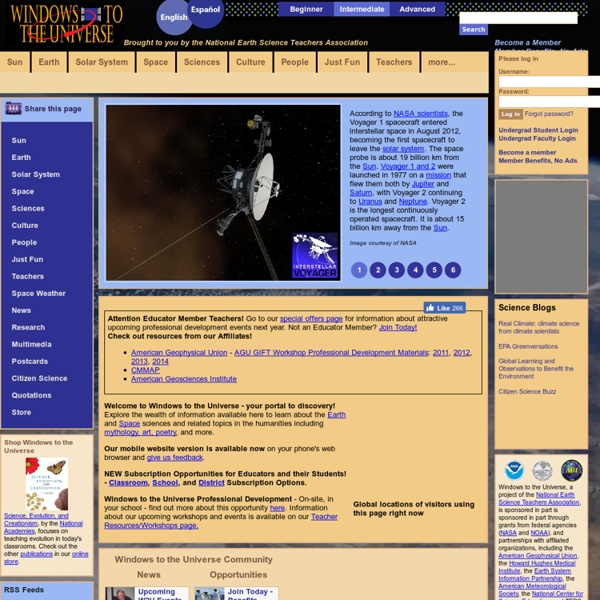 This first global map of ocean surface saltiness, released in September 2012 by the NASA Aquarius mission team, shows the distribution of salt in the first 2 cm of the Earth's ocean. Salinity variations are one of the main drivers of ocean circulation, and are closely connected with the cycling of freshwater around the planet. High salinity is seen in the Mediterranean, Atlantic, and the Arabian Sea. Image courtesy of NASA/GSFC/JPL-Caltech

This Is The Most Distant Galaxy We've Ever Observed Break out the record books, because we’ve just found the most distant galaxy we’ve ever seen. Discovered by the Hubble Space Telescope, it lets us peer back into the far reaches of the universe. Called GN-z11, the galaxy is seen as it appeared 13.4 billion years ago, and owing to the expansion of the universe it is now more than 32 billion light-years from Earth. This means we are looking at it just 400 million years after the Big Bang, which is seriously impressive. The previous record for the most distant galaxy we’d found, EGS8p7, came in at 13.2 billion years. The discovery of GN-z11 will be published in The Astrophysical Journal on March 8.

The Solar System Our solar neighborhood is an exciting place. The Solar System is full of planets, moons, asteroids, comets, minor planets, and many other exciting objects. Learn about Io, the explosive moon that orbits the planet Jupiter, or explore the gigantic canyons and deserts on Mars. Birth of the Moon Posted by admin on Saturday, February 11, 2012 · The latest episode of Cosmic Journeys, enjoy in full HD 1080p. Scientists have been reconstructing the history of the moon by scouring its surface, mapping its mountains and craters, and probing its interior.

"Habitable Planets More Than 5-Billion-Years Old Closer to Galaxy's Center" "The sun’s location within the dust-obscured galactic disk is a complicating factor to observe the galactic structure," said Denilso Camargo, lead author of the paper from the Federal University of Rio Grande do Sul in Brazil. The job of mapping our own Milky Way galaxy from planet Earth, situated about two-thirds of the way out from the galaxy's center, is similar totrying to create a map of your house while confined to only the living room. You might peek through the doors into other rooms or look for light spilling in through the windows. But, in the end, the walls and lack of visibility would largely prevent you from seeing the big picture. Clouds of dust permeate the Milky Way, blocking our view of the galaxy's stars. Today, researchers have a suitable map of our galaxy's spiral structure, but, like early explorers charting new territory, they continue to patiently and meticulously fill in the blanks.

Exoplanets An interactive version of XKCD 1071: Exoplanets using data from Planetary Habilitability Laboratory (via @ProfAbelMendez) and adapted code from the d3.js Bubble Chart example (by @mbostock). Planets are drawn to scale using radius data. The dataset also includes attributes such as atmosphere type, which is included in the information area on the left. Incredible New Map Of The Milky Way Released One of the largest studies of our galaxy has just been completed. The ATLASGAL survey has mapped a huge swathe of cold dust and gas distribution in the Milky Way in order to understand how and where stars form. The survey has so far produced 70 scientific papers, and in the latest publication, astronomers combined the survey data with observations from the European Space Agency's Planck satellite. The paper, which appeared in Astronomy & Astrophysics, detailed the location of dense star-forming regions and established a precise star-formation rate for our galaxy: The Milky Way forms 13 stars the mass of the Sun every 10 years.