What is Chaos? An Interactive Online Course for Everyone 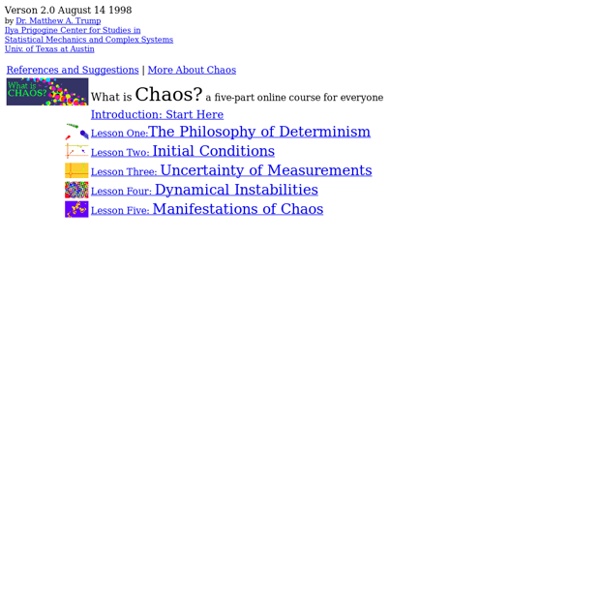 Exception paradox In the exception paradox, the statement "every rule has an exception" leads to a contradiction. The argument[edit] Every rule has an exception."Every rule has an exception." is a rule.There is a rule R without exception. How To Use Evernote: The Unofficial Manual Table Of Contents §1–What Is Evernote? §2–An Overview Of The Desktop App §3–An Overview Of The Smartphone Apps A Study of Fairy Tales: Chapter I. The Worth of Fairy Tales Sacred Texts Miscellaneous Index Previous Next In olde dayes of the kyng Arthour, Of which that Britouns speken gret honour, Al was this lond fulfilled of fayrie; The elf-queen, with hir joly compaignye, Daunced ful oft in many a grene mede. ONLY a few years ago, in the gardens of the Tuileries, in Paris, a statue was erected in memory of Charles Perrault, to be placed there among the sculptures of the never-to-be-forgotten fairy tales he had created,--Red Riding Hood, Sleeping Beauty, Puss-in-Boots, Hop-o'-my-Thumb, Bluebeard, and the rest,--so that the children who roamed the gardens, and in their play gathered about the statues of their beloved fairy friends, might have with them also a reminder of the giver of all this joy, their friend Perrault.

How to use Evernote to enhance your productivity and improve your understanding of medicine Readers of the iMedicalApps forums will have seen that Evernote was rated particularly highly by a number of commenters when asked ‘How do you use mobile technology to help with your studies’. As a result of this, I was encouraged to try Evernote out for an extended period and see what impact it could make upon my learning. I am pleased to say that I have now had enough time to explore Evernote and can now highly recommend it as one of the best note taking apps for medical purposes. So without further ado… What is Evernote? Evernote is an app available on a wide range of devices including Desktop, Web, Android, iPhone, iPad, Blackberry, Windows 7 that allows you to ‘Capture anything’.

Slavic mythology Many generations of Slavic artists were inspired by their national folklore: Ilya Yefimovich Repin, Sadko in the Underwater Kingdom (1876) Slavic mythology is the mythological aspect of the polytheistic religion that was practised by the Slavs before Christianisation. The religion possesses many common traits with other religions descended from the Proto-Indo-European religion. Old Slavic religion evolved over more than a thousand years and some parts of it were from neolithic or possibly even mesolithic times.  brain games for mental fitness The numerous memory games and tests in this category will challenge your memory in all sorts of different ways. Work to remember patters, shapes, associations, images and more. If you are looking for even more practice, check out the exercises in the memory section of our mind exercises.

Sexology Sexology is the interdisciplinary study of human sexuality, including human sexual interests, behaviors and function.[1] The term sexology does not generally refer to the non-scientific study of sexuality, such as political science or social criticism.[2][3] In modern sexology, researchers apply tools from several academic fields, such as biology, medicine, psychology, epidemiology, sociology and criminology. Sexologists study sexual development (puberty), sexual orientation, sexual relationships and sexual activity, as well as document the sexualities of special groups; for example, child sexuality, adolescent sexuality, sexuality among the elderly and the disabled. The sexological study of sexual dysfunctions and disorders, including erectile dysfunction, anorgasmia, and pedophilia, are also common. History[edit]

How to Help a Child With Weak Working Memory Does your child have a weakness with verbal (auditory) or visual-spatial working memory? If so, you may find that it is greatly interfering with academic achievement. Fortunately, there are many ways to help—from teaching ways to compensate to lifestyle changes to brain-training techniques.