NASA Astrobiology: Life in the Universe 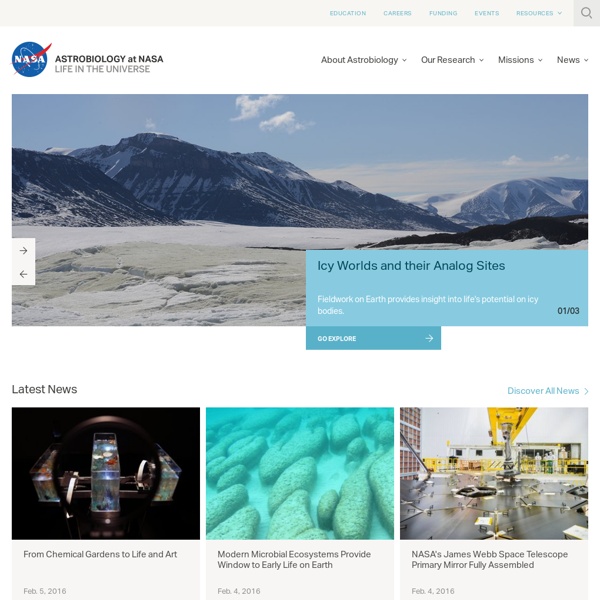 NOVA | Finding Life Beyond Earth PBS Airdate: October 19, 2011 NARRATOR: Is Earth the only planet of its kind in the universe, or is there somewhere else like this out there? Is there life beyond Earth? The search for alien life is one of humankind's greatest technological challenges. And scientists are seeking new ways to find answers. JIM GREEN (Director, Planetary Science Division, NASA): We're pushing the boundary of information of where life can exist, past the earth and out into the solar system. NARRATOR: Leading the search are sophisticated telescopes that scan the sky and an armada of robotic probes exploring the outer reaches of our solar system, all revealing the planets, moons, asteroids and comets like never before. AMY MAINZER: We can go places and see things that there's no other way we could've ever seen. JIM GREEN: The pace of discovery, just in the last couple of years, is just mindboggling. NARRATOR: Finding Life Beyond Earth, up now on NOVA. NARRATOR: But what exactly is this liquid?

Why the USA and NASA need astrobiology I am an astrobiologist, for 50 years an astronomer, and before that a physicist. With my colleague and friend Roger Angel, we started the process of learning how to detect Earth-like planets in 1985. I am a co-author of the NASA booklet The Terrestrial Planet Finder. I have served with scientific and technical teams to develop that mission since 1995. I have been a professor of astronomy at U. Arizona for the last 30 years, and I became P.I. for the Arizona team (LAPLACE, Life And PLanets Astrobiology CEnter) in 2003. As a professional who has moved my research area around many times, I have both been depressed and concerned about the difficulty my colleagues have in pulling together material that crosses many fields. There are many complex issues that face our country and our world today. The first activity of my Astrobiology team was to hold a graduate student conference. Neville J. Professor of Astronomy Director LAPLACE

Xenobiology © 1981 Robert A. Freitas Jr. All Rights Reserved. Robert A. URL: This paper contains material originally drawn from the book Xenology (1979) by Robert A. Xenology is the study of all aspects of life, intelligence, and civilization indigenous to environments other than Earth. Xenobiology – the study of alien lifeforms – is a major subdiscipline within the xenological sciences. Biological Chauvinisms The term “chauvinism” derives from the name of Nicolas Chauvin, a highly jingoistic soldier born at Rochefort in the late 18th century. For instance, there used to be the notion that oxygen (O2) is absolutely required for higher life. Another early biological chauvinism was the insistence that life is an especially fragile phenomena limited to a very narrow range of environments. Spacecraft sent to other planets in the last decade have returned a fascinating wealth of information about our nearest neighbors in space. Carbon/Water Lifeforms Dr.

Astrobiology Center The Columbia Astrobiology Center (NYC-Astrobiology Consortium) The Columbia Astrobiology* Center represents a unique consortium of Columbia University departments, the Goddard Institute for Space Studies (NASA), and the American Museum of Natural History. It is an interdisciplinary effort dedicated to investigating the wide range of phenomena that may participate in the origin and evolution of life on Earth and beyond. We undertake fundamental research in many areas, including: The study and modeling of exoplanets, their characteristics and climates. *"Astrobiology: The study of the origins, evolution, and future, of life in the Universe"

Seth MacFarlane Champions New ‘Cosmos’ Series on Fox Photo WASHINGTON — When some of the nation’s brightest minds gathered here at the Library of Congress to celebrate Carl Sagan, the pioneering astrobiologist, the first guest speaker was someone with no professional background in science. It was Seth MacFarlane, the multitasking comedian and creator of “Family Guy,” who gave an impassioned speech to the crowd of Ph.D.s and NASA advisers on how scientific achievement had “ceased in many parts of this country to be a source of pride.” “Long accepted scientific truths have been brought into question largely — who are we kidding? Now he is taking another step beyond his reputation as a purveyor of coarse humor, as an executive producer and prime mover of a resurrected version of “Cosmos,” the immensely popular documentary series that Sagan helped create and hosted for PBS in 1980. Mr. “ ‘Cosmos’ addressed questions that every human being has, whether they think about them on a mathematical level or just as a layman,” Mr. Yet for Mr. Ms. Ms.

Xenology Home Page Future Space-based Habitats TERC Astrobiology How Incomprehensible Could Extraterrestrials Be? A few days ago Paul Gilster, the author of Centauri Dreams: Imagining and Planning Interstellar Exploration and the curator of Centauri Dreams , posted a thoughtful discussion of a blog entry I wrote (titled What's The Connection Between Deafness and SETI? ) His discussion and the resulting comments were fascinating, and in this post I want to carry on that conversation. I want to ask: Will extraterrestrials be so different from us as to be truly incomprehensible? I think the answer is no. In one of the comments, Christopher Phoenix argued that aliens could be so different from us as to be incomprehensible. "How can we expect to use extraterrestrials as a mirror for human behavior? Excellent point. Okay. Still, it’s fair to ask if an alien species might be so different from us that even our science wouldn’t be able to get a grip on it. I don’t think biology in itself would create that kind of radical incomprehensibility. Technology presents us with a more difficult problem.

Colonization of the Moon 1986 artist concept The colonization of the Moon is the proposed establishment of permanent human communities or robot industries[1] on the Moon. Recent indication that water might be present in noteworthy quantities at the lunar poles has renewed interest in the Moon. Polar colonies could also avoid the problem of long lunar nights – about 354 hours,[2] a little more than two weeks – and take advantage of the sun continuously, at least during the local summer (there is no data for the winter yet).[3] Permanent human habitation on a planetary body other than the Earth is one of science fiction's most prevalent themes. Proposals[edit] Concept art from NASA showing astronauts entering a lunar outpost The notion of siting a colony on the Moon originated before the Space Age. In 1954, science-fiction author Arthur C. In 1959, John S. Project Horizon[edit] Lunex Project[edit] Lunex Project was a US Air Force plan for a manned lunar landing prior to the Apollo Program in 1961.

The Stanford Astrobiology Course Welcome and introduction to website Astrobiology is at once one of the newest of scientific meta-disciplines, while at the same time encompassing some of our oldest and most profound questions. Beyond strictly utilitarian concerns, such as “what is for dinner?” and leaving offspring, asking the three great questions of astrobiology seems to be embedded in what it means to be human. While these questions are ancient questions, we now have the technological tools to grapple with them at a whole new scientific level. During recent centuries the Copernican and Darwinian Revolutions laid the way for Astrobiology. So what is Astrobiology? 1. 2. 3. To fulfill the promise of Astrobiology requires a tool not normally in many scientists’ arsenal: space exploration. This website has grown out of the oldest such class in the country, Stanford’s “Astrobiology and Space Exploration” course. Where do we come from? Where are we going? Are we alone? Space Exploration