How to root galaxy note 2 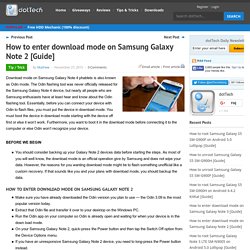 The Odin flashing tool was never officially released for the Samsung Galaxy Note 4 device, but nearly all people who are Samsung enthusiasts have at least hear and know about the Odin flashing tool. Essentially, before you can connect your device with Odin to flash files, you must put the device in download mode. You must boot the device in download mode starting with the device off first or else it won’t work. Furthermore, you want to boot it in the download mode before connecting it to the computer or else Odin won’t recognize your device. How-To: Safely Root Samsung Galaxy Note 2. The Galaxy Note 2 was Samsung’s official announcement that “phablets” were here to stay. 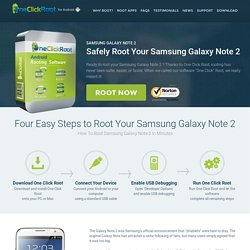 The original Galaxy Note had attracted a niche following of fans, but many users simply agreed that it was too big. Undeterred, Samsung went on to create the Galaxy Note 2. Released in September 2012, the Note 2 surpassed sales targets. Within a month, Samsung sold 3 million units. Within 2 months, Samsung had crossed the 5 million mark. As a result, the Note 2 is one of the most popular Androids still used today. GalaxyNote2Root.com - Your source for Galaxy Note 2 rooting, custom ROMs, and more! How to root Samsung GALAXY Note 2. GALAXY Note II is quite a star model of Samsung and it is one of the most popular Android device this year. 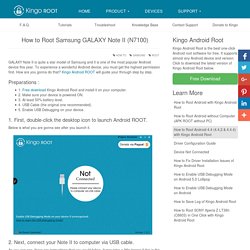 To experience a wonderful Android device, you must get the highest permission first. How are you gonna do that? Kingo Android ROOT will guide your through step by step. Preparations : Otevřená komunita pro otevřenou platformu - Android mobily a tablety. Samsung Galaxy Note II GT-N7100, N7105. Proudly presenting you... 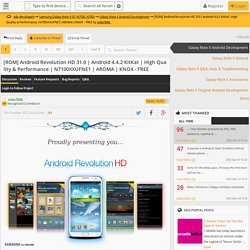 "My phone is now perfectly smooth, fast, stable. I do not expect much more from my phone! "DarkAdrien "This release is amazing! ROM feels super fast! "Feels a lot smoother in use - scrolling, swiping between sense screens. The Ultimate S Pen Customization Tool for Your Galaxy Note 3 « Samsung Galaxy Note 3. Make your Galaxy Note 2 awesome again. Ditch Touchwiz, Get CyanogenMod, Profit If you’ve stuck around with Touchwiz on your Galaxy Note 2 since you got it, it’s time to venture out of the walled garden and try something else. 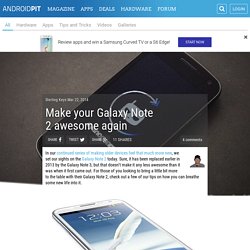 First, you’ll need to unlock and root your device (just follow our handy guide) and then you can go ahead and grab something a little bit more exotic, say, CyanogenMod? With a ton of features including PIE Mode, customizable lockscreens and quick launch guides, automated profiles based on location/connection, it’s hard to imagine why you wouldn’t give it a shot. Plus, with the CyanogenMod Installer officially supporting the Galaxy Note 2, installation is literally just a click away. 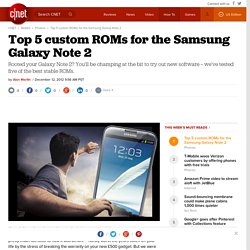 You might be wondering what all the fuss was about, as it's pretty much identical to how it was before -- hardly worth the years taken off your life by the stress of breaking the warranty on your new £500 gadget. But we were just warming up for where the real fun begins, and that's with custom ROMs. A custom ROM can be the best thing you ever do with your Android phone. Android is extraordinarily customisable -- that's why comparing an HTC device to a Sony one is like looking at two different species.

Samsung's TouchWiz interface divides critics, with some liking its similarity to iOS, while others lament the sheer amount of Samsung-branded junk that clutters up the phone. Stable custom ROMs are a little thin on the ground for the Galaxy Note 2 at the moment. LiquidSmooth ROM – HighOnAndroid ROM of the Week! Download this video for viewing in HD on your smartphone or computer. 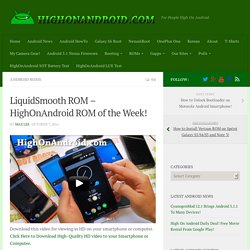 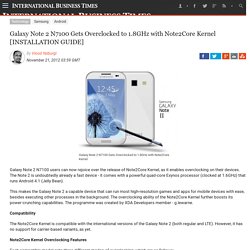 The Note 2 is undoubtedly already a fast device - it comes with a powerful quad-core Exynos processor (clocked at 1.6GHz) that runs Android 4.1 (Jelly Bean). This makes the Galaxy Note 2 a capable device that can run most high-resolution games and apps for mobile devices with ease, besides executing other processes in the background. The overclocking ability of the Note2Core Kernel further boosts its power-crunching capabilities. The programme was created by XDA Developers member - g.lewarne. Compatibility The Note2Core Kernel is compatible with the international versions of the Galaxy Note 2 (both regular and LTE). ICS vs Jelly Bean vs Kit Kat - Pg. 2.

Quote: Originally Posted by OuncE718 Thanks for the response but my post isn't intended to be a poll. 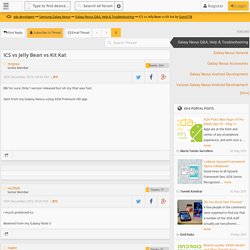 I simply want to know if ICS or Jelly Bean ROM is faster/smoother than Kit Kat since Kit Kat isn't an official ROM. Not everybody has the time nor the patience to flash a bunch of different ROMs/kernel combinations and go through the process of restoring data, apps, accounts etc. NO OFFENSE Sent from my Galaxy Nexus using xda app-developers app. How To Speed Up Your Samsung Galaxy Note 2 - Xdroider. When released back in September 2012, the Samsung Galaxy Note 2 was a tremendous improvement over its predecessor. 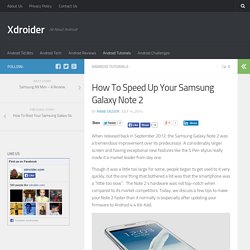 A considerably larger screen and having exceptional new features like the S Pen stylus really made it a market leader from day one. Though it was a little too large for some, people began to get used to it very quickly, but the one thing that bothered a lot was that the smartphone was a “little too slow”. The Note 2’s hardware was not top-notch when compared to its market competitors. How to speed up Galaxy S3/Note2/S2/Note/s4/Note3. Samsung Galaxy Note 2 &mdash; Root the Galaxy Note 2 – Android Forum. Be careful! This is at your own risk! Neither AndroidPIT nor I will be held responsible for any damages!

The Case Against Root: Why Android Devices Don’t Come Rooted. We’ve written about rooting your Android smartphones and tablets before, but why don’t they come rooted? Google argues that rooting is a mistake for security reasons, as it subverts Android’s security model. Over the years, Google has added more and more formerly root-only features to Android – from screenshots to support for encryption and VPNs. The goal is to minimize the need for rooting. What is Rooting, Anyway? Android is based on Linux, where the “root” user is equivalent to the Administrator user in Windows. A standard rooting process will also an application like Superuser or SuperSU. Breaking Out of Android’s Security Model. Here’s Why You Should Avoid Rooting Your Android Phone.

“Rooting” could mean causing a plant or cutting to grow roots, or when an animal turns up the ground with its snout in search of food. In this context, however, “rooting” is the process of allowing apps to attain “privileged control” or “root access” within the Android subsystem. Almost all smartphones and tablets come with root access disabled — at least to you, the end-user. Ironically, the desktop or laptop computer that you use probably already has root access. When we’re talking smartphones and tablets, “rooting” in Android is often compared to Jailbreaking in iOS.

Though there are significant distinctions between the two, the end result is the same: being able to use your device how and where you want without your OEM, Carrier, or anyone else getting in your way. Here’s Why You Should Avoid Rooting Your Android Phone. Here’s Why You Should Root Your Android Phone. Two terms you hear thrown around a lot in the Android community are “root” and “rooting“. You always hear of all these advantages to having a “rooted” device.

How to root Samsung GALAXY Note 2.