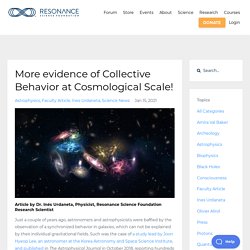 Inés Urdaneta, Physicist, Resonance Science Foundation Research Scientist Just a couple of years ago, astronomers and astrophysicists were baffled by the observation of a synchronized behavior in galaxies, which can not be explained by their individual gravitational fields. Such was the case of a study lead by Joon Hyeop Lee, an astronomer at the Korea Astronomy and Space Science Institute, and published in The Astrophysical Journal in October 2018, reporting hundreds of galaxies rotating in sync with the motions of galaxies that were tens of millions of light years away. Given the fact that from our known theories, in principle it would be impossible that galaxies separated by megaparsecs (millions of light years) could directly interact with each other, their interaction happens across distances that are too large to be explained by their gravitational force. Antarctica's Snow is Made Partly Out of Stardust!

In a recent analysis of snow from Antarctica, scientists made a surprising discovery – a good chunk of that white fluffy stuff is actually stardust. 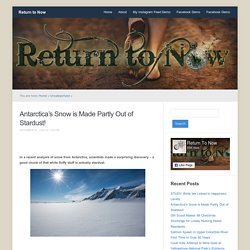 A team of scientists recently collected 1000 pounds of snow from Antarctica, melted it, and sifted through the particles. A Deeper Look into Black Holes. By Dr. 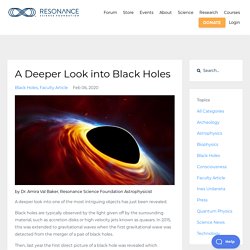 Amazing video: Planets viewed from Earth as if they were at the distance of our moon. Sciencealert. If astronomers' calculations are correct, the Solar System is right in the middle of a turbulent space event: a vast 'hurricane' of dark matter, blowing at an insane speed of 500 kilometres per second (310 mps). 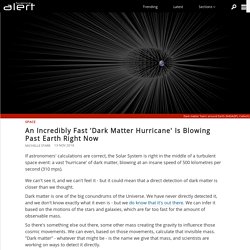 We can't see it, and we can't feel it - but it could mean that a direct detection of dark matter is closer than we thought. Dark matter is one of the big conundrums of the Universe. We have never directly detected it, and we don't know exactly what it even is - but we do know that it's out there. We can infer it based on the motions of the stars and galaxies, which are far too fast for the amount of observable mass. So there's something else out there, some other mass creating the gravity to influence those cosmic movements. The helical model - our solar system is a vortex. Planetarium - Interactive star map and virtual sky.

And beyond. NASA Just Released This Photo Of Heaven… It’s Closer Than You’d Expect And WAY More Beautiful. ESO Release Incredible View Of The Cat’s Paw Nebula. Find the biggest screen you can, because this image deserves to be seen in its full 2-billion-pixel glory. 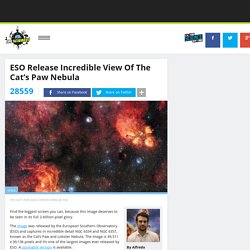 The image was released by the European Southern Observatory (ESO) and captures in incredible detail NGC 6334 and NGC 6357, known as the Cat’s Paw and Lobster Nebula. The image is 49,511 x 39,136 pixels and it’s one of the largest images ever released by ESO. A zoomable version is available. The objects, located 5,500 and 8,000 light-years from Earth respectively, were first seen by British astronomer John Herschel in 1837, although he could only resolve the bright toepads. It took decades for their shape to become clearer, which is when they got their nicknames. Astronomical instruments have improved significantly since then and we can now see these nebulae better than ever before. These giant gas clouds are made mostly of hydrogen and are shrouding hot young stars that are 10 times heavier than the Sun. Credit: ESO. 209 Seconds That Will Make You Question Your ENTIRE Existence! I'm Speechless. Spread It! The scale of the universe is almost beyond our imagination. 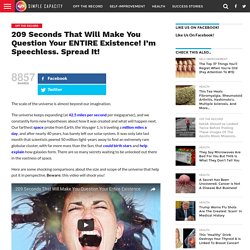 The universe keeps expanding (at 42.5 miles per second per megaparsec), and we constantly form new hypotheses about how it was created and what will happen next. Our farthest space probe from Earth, the Voyager 1, is traveling a million miles a day, and after nearly 40 years, has barely left our solar system. It was only late last month that scientists peered 50 million light-years away to find an extremely rare globular cluster, with far more mass than the Sun, that could birth stars and help explain how galaxies form. Is the Universe a Giant living organism? It certainly is possible that life could exist on a larger scale, perhaps on a “cosmic level”. 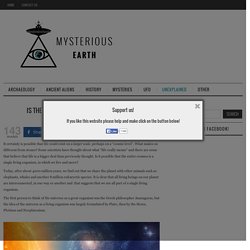 What makes us different from stones? Some scientists have thought about what “life really means” and there are some that believe that life is a bigger deal than previously thought. Is it possible that the entire cosmos is a single living organism, in which we live and move? Today, after about 4000 million years, we find out that we share the planet with other animals such as elephants, whales and another 8 million eukaryotic species.

Earth - The hunt for invisible dwarf galaxies. Yashar Hezaveh had heard the rumours. 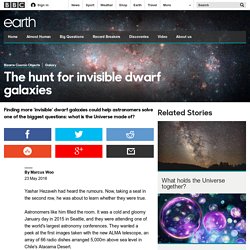 Now, taking a seat in the second row, he was about to learn whether they were true. Astronomers like him filled the room. It was a cold and gloomy January day in 2015 in Seattle, and they were attending one of the world's largest astronomy conferences. Earth - The stars that hid themselves away. Astronomers have spotted some ancient stars, known as RR Lyrae. 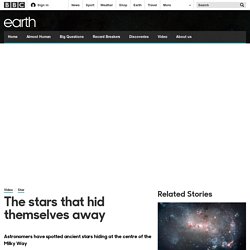 They are at least 10 billion years old and were found hiding at the centre of the Milky Way. Although these stars are bright, they are hard to spot because they are hidden behind dense clouds of galactic dust and gas. Earth - The ancient black holes that can outshine entire galaxies. Once again, Maarten Schmidt looked at the data. 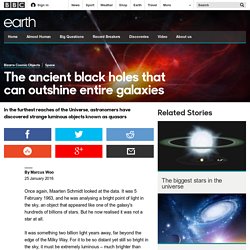 It was 5 February 1963, and he was analysing a bright point of light in the sky, an object that appeared like one of the galaxy's hundreds of billions of stars. But he now realised it was not a star at all. It was something two billion light years away, far beyond the edge of the Milky Way. Earth - The hunt for invisible dwarf galaxies. Earth - The first planet ever discovered around another star. On a winter's night in January 1995, rain fell on the Haute-Provence Observatory in southern France. Didier Queloz, an astronomy graduate student, was supposed to be observing. BBC Two - Human Universe, A Place in Space and Time, Small but mighty. Can a Universe Create Itself Out of Nothing? Every Wednesday, Michio Kaku will be answering reader questions about physics and futuristic science. If you have a question for Dr. Kaku, just post it in the comments section below and check back on Wednesdays to see if he answers it.

Today, Dr. Universe has two trillion more galaxies than previously thought. There are a dizzying two trillion galaxies in the universe, up to 20 times more than previously thought, astronomers reported on Thursday. The surprising finding, based on 3D modeling of images collected over 20 years by the Hubble Space Telescope, was published in the Astronomical Journal. Scientists have puzzled over how many galaxies the cosmos harbors at least since US astronomer Edwin Hubble showed in 1924 that Andromeda, a neighboring galaxy, was not part of our own Milky Way.

But even in the era of modern astronomy, getting an accurate tally has proven difficult. To begin with, there is only part of the cosmos where light given off by distant objects has had time to reach Earth.

A Year Ago, Scientists Cracked One Of Einstein's Greatest Mysteries — Now A Bizarre New Form Of Astronomy Is Emerging. A year ago Tuesday, scientists inside two giant L-shaped instruments saw a strange blip on their screens they could hardly believe. It was the first evidence of gravitational waves — ripples in the fabric of space that careen across the universe, right through everything and everyone. Einstein first predicted their existence 100 years ago, yet the famous scientist doubted we'd ever find any. However, scientists from the Laser Interferometer Gravitational-Wave Observatory (LIGO) experiment finally detected these cosmic reverberations on Sept. 14, 2015, thanks to the fearsome collision of two black holes about 1.3 billion light-years from Earth.

They announced the discovery on Feb. 11, 2016, after months of exhaustive verification. Then, in June 2016, the 900-scientist LIGO team announced their second detection, made on Dec. 2016. Here are just a handful of formerly impossible things astronomers could do with gravitational waves. NASA/CXC/M. JURASSIC MARS: 'Conclusive proof dinosaurs once roamed the Red Planet' EWAO Confirmed: Scientists have found a new 'planet' beyond the orbit of Neptune. This is what the entire known Universe looks like in a single image. We already knew the Earth was not the center of the universe, but now we know exactly where it is. NASA wykonała zdjęcie które udowadnia że ludzki umysł nie jest w stanie ogarnąć rozmiarów Wszechświata.

The Earth has survived some serious catastrophes. Here are the 4 worst. Astronomers have found Another Earth! NASA’s Kepler Space Telescope discovered an Earth-like planet circling a nearby star within the Goldilocks zone of our galaxy. EWAO A Massive Galaxy Orbiting Our Own Just Appeared Out of Nowhere. Astronomers observing the sky just came across a huge discovery as they managed to spot a giant galaxy orbiting the Milky way where previously no galaxies were located.

EWAO Scientist Finds Palpable Evidence of a Parallel Universe that Once Collided With Our Own.

Moon. This Is The Most Distant Galaxy We've Ever Observed. "Habitable Planets More Than 5-Billion-Years Old Closer to Galaxy's Center" Aliens could be living on 700 QUINTILLION planets in the universe. Incredible New Map Of The Milky Way Released. The Moon's Formation Was Even More Dramatic Than Thought. Space map that reveals our place in the universe may be about to get bigger. 46-Gigapixel View of Milky Way is Largest-Ever Image of Space. These 26 Pictures Will Make You Re-Evaluate Your Entire Existence. Big History Project. Photos du journal - I fucking love science. The geometric dance of Earth & Venus... - The Resonance Project.

Physicists Find Evidence That The Universe Is A Giant Brain! 18 Photos That Will Make You Reconsider Your Existence! Medium-Sized Asteroid Impact Would Darken The Sky And Freeze The World. Constellations & Ancient Civilizations. Jupiter's Icy Moon Europa: Best Bet for Alien Life? Scientific Visualization Studio. Windows to the Universe.