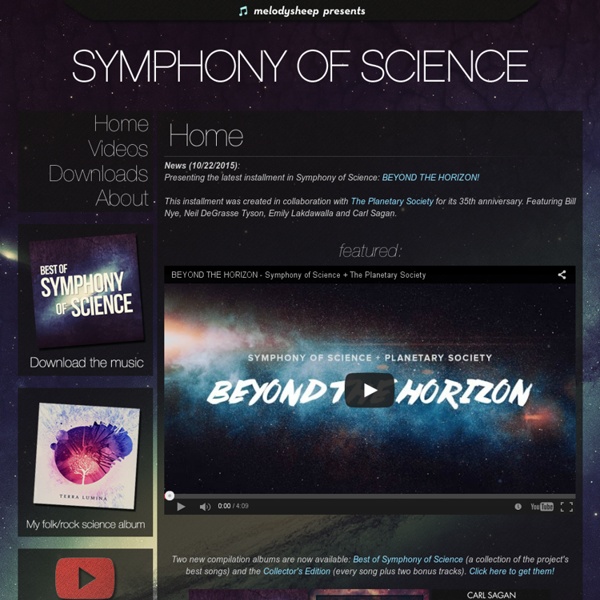 The Official Site of Vince Guaraldi A Few Words about Dr. Funk By Derrick Bang Like most so-called overnight successes, Vincent Anthony Guaraldi -- who forever described himself as "a reformed boogie-woogie piano player" -- worked hard for his big break. The man eventually dubbed "Dr. Funk" by his compatriots was born in San Francisco on July 17, 1928; he graduated from Lincoln High School and then San Francisco State College. Guaraldi began performing while in college, haunting sessions at the Black Hawk and Jackson's Nook, sometimes with the Chubby Jackson/Bill Harris band, other times in combos with Sonny Criss and Bill Harris. Ology List - List of -ology Sciences and Scientific Disciplines Updated November 12, 2015. An ology is a discipline of study, as indicated by having the -ology suffix. This is a list of science ologies.

Are You Living in a Simulation? Many works of science fiction as well as some forecasts by serious technologists and futurologists predict that enormous amounts of computing power will be available in the future. Let us suppose for a moment that these predictions are correct. One thing that later generations might do with their super-powerful computers is run detailed simulations of their forebears or of people like their forebears. Because their computers would be so powerful, they could run a great many such simulations. Suppose that these simulated people are conscious (as they would be if the simulations were sufficiently fine-grained and if a certain quite widely accepted position in the philosophy of mind is correct). Then it could be the case that the vast majority of minds like ours do not belong to the original race but rather to people simulated by the advanced descendants of an original race.

Planet of the Apes POSTED: Sunday, September 30, 2012, 12:34 PM Peter Andolfatto One of the more difficult aspects of evolution for some people to swallow is the notion that random copying errors in DNA can add up to anything useful. Mars Exploration Program: Mars for Educators You can participate in four major programs: Curriculum Supplements Robotics activities are available. Download the activity summaries (PDF, 1.33 MB) or the full activity set (PDF, 1.08 MB). The Mars Curriculum Modules are designed to help bring the topic of Mars into your 4th through 12th grade classrooms. Exploring Mars (Grades 4-10)

An album all about science! "Terra Lumina" by John Boswell Terra Lumina is a new musical project by John D Boswell, aka melodysheep, the creator of Symphony of Science, and Will Crowley, fellow musician and collaborator for the band Hudson. We're looking to create and publish an album of songs covering a topic that is under represented in today's musical scene - science. John has pioneered a new form of inspirational and educational music through his Symphony of Science music video series, which has garnered millions of views and inspired thousands of people to pursue scientific interests; Will Crowley is a scientifically educated multi-instrumentalist and has worked for years in the public school system as a math and science educator. The album promises to be an epic collection of songs about topics that are endlessly fascinating, yet rarely represented musically. Themes we want to cover include photosynthesis, gravity, supernovae, natural selection, and much more. We need your help to fund the creation of this album.

Should have considered your recommendation and not watched that high. that was super intense haha. by nataliejtm Jan 18

this is soooo trippy. DO NOT WATCH THIS HIGH. by poppadocsez Jan 18