An Atlas of The Universe 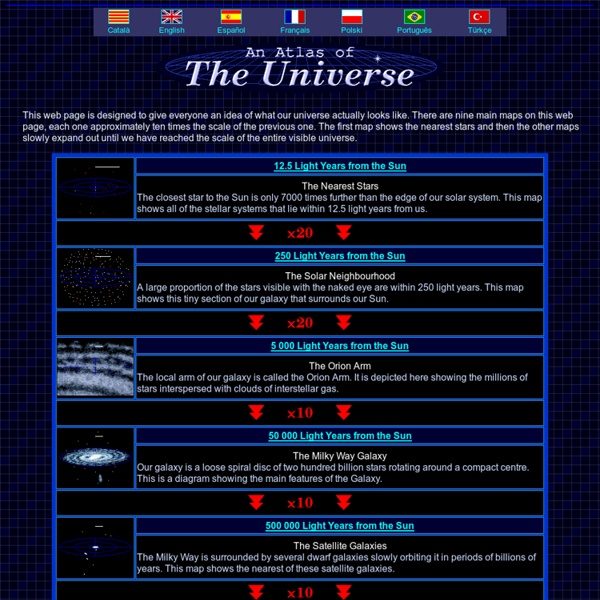 Cosmic Journeys Cutting-edge stories about the origins of the universe, black holes, exploding stars, the search for ET life, and the nature of the planets. How did the universe begin? Where will it end? Are there other worlds like Earth? A groundbreaking series combs the rubble of exploding stars and the collision of worlds in search of answers to our most searching questions about the cosmos. Crashing into the Moon. Attack of the Sun. The Asteroid that Flattened Mars. Super Hurricanes. Saturn's Mysterious Moons. The Largest Black Holes in the Universe. How Large is the Universe? When Will Time End? The Incredible Journey of Apollo 12. Supermassive Black Hole in the Milky Way Galaxy. The Search For Earth-Like Planets. Voyage to Pandora: Humanity's First Interstellar Flight. Hubble 20 Years of Space-Shattering Discoveries. Black Holes: The Other Side of Infinity. Watch the full documentary now (playlist)

Relativistic Cosmology Back to main course page John D. Norton Department of History and Philosophy of Science University of Pittsburgh Einstein's Great Book of Universes The arrival of Einstein's general theory of relativity marked a rebirth of interest and work in cosmology, the study of the universe on the largest scale. What connected all these together was Einstein's gravitational field equations. Minkowski Spacetime Minkowski spacetime is the spacetime in which special relativity holds. This is the unsummed curvature. Einstein's equations tell us that this summed curvature equals the matter density. A Minkowski spacetime is still physically relevant to our spacetime, however. "Blue marble" image from NASA Yet in any small patch--such as an area of land the size of a city--we can ignore the curvature and apply Euclidean geometry without appreciable error. 2x + 1 = 5 x = 2 λ

Periodic Table of the Elements Hydroponic Systems Water Culture or Aquaculture Aggregate Culture Aeroponics Continuous Flow Systems Water Culture or Aquaculture The water culture method of hydroponics is the simplest to set up on a small scale. In this system the plant roots are totally immersed in a nutrient solution. The actual design of the system is limited only by the imagination of the builder. A standard tray or tank is shown in Figure 1. You can make a small system from a child's wading pool, a plastic pail, a fish tank, or a drinking tumbler. Figure 1. Short plants such as lettuce and spinach will usually support themselves. Figure 2. Vining plants such as cucumbers and tomatoes must be supported by string. Change the nutrient solution every two weeks when the plants are small and once a week as they begin to mature. Aggregate Culture Growing plants in aggregates such as sand or gravel is often preferred to the water culture method since the aggregate helps to support the roots. Figure 3. Figure 4. Figure 5. Figure 6. Aeroponics

SIMBAD Astronomical Database What is SIMBAD, and what is it not ? % The purpose of Simbad is to provide information on astronomical objects of interest which have been studied in scientific articles. Simbad is a dynamic database, updated every working day. It provides the bibliography, as well as available basic information such as the nature of the object, its coordinates, magnitudes, proper motions and parallax, velocity/redshift, size, spectral or morphological type, and the multitude of names (identifiers) given in the literature. Simbad is a meta-compilation built from what is published in the literature, and from our expertise on cross-identifications. Simbad is not a catalogue, and should not be used as a catalogue.