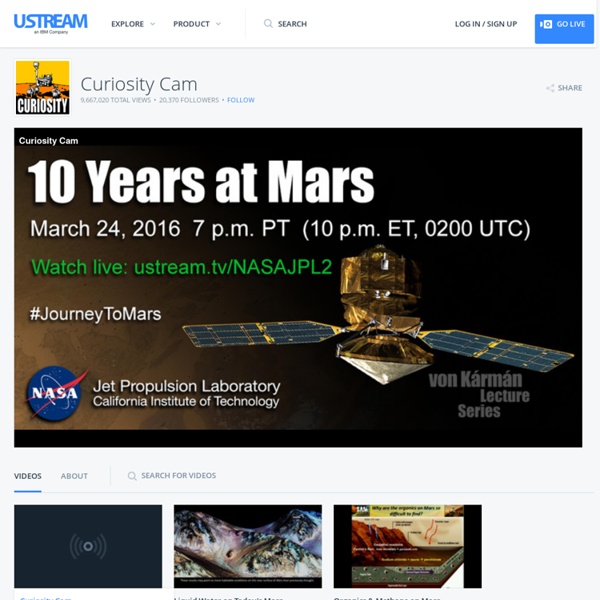 UPCOMING EVENT NASA Tech Benefits Earth 7 p.m. PT (10 p.m. ET, 0200 UTC), Thursday, April 10, 2014 NASA's Jet Propulsion Laboratory is known for missions that greatly impact our understanding of the solar system and the universe. But the ground breaking research and development done at JPL has also had many impacts on everyday life on earth. JPL innovations can be found everywhere, from farms to hospitals to our very own homes. Speaker: Indrani Graczyk, Manager, Commercial Program Office, JPL Follow the mission and the rovers on Twitter (@MarsRovers) and Facebook. For additional information on Spirit and Opportunity and the 10 year anniversary on Mars, visit For information about NASA's Curiosity mission, visit: and Follow the Curiosity rover on Twitter (@MarsCuriosity) and Facebook FAQsGet answers to some of the most common questions about Curiosity: Mission name: Mars Science Laboratory Rover name: Curiosity rover Weight: 900 kilograms (2,000 pounds) Arrival: August 5, 2012 PDT Chat Rules:

Sky Map for Android What is Sky Map? Google Sky Map turns your Android-powered mobile phone into a window on the night sky. It will identify objects that appear in the sky and allow users to search for them. How can I get Sky Map? The app is available for download at the Google Play. Where is Sky Map be available? Galleries - NASA Solar System Exploration National Aeronautics andSpace Administration Solar System Exploration beta Galleries ShareEmailPrint No. 41 - 2011: You Can Participate in Astronomy Research Projects You Can Participate in Astronomy Research Projects Finding Exoplanets: The graph in this illustration shows how the light we see from a star decreases slightly when one of its planets crosses the star’s disk. Planet hunters sometimes use this transit technique to find exoplanets. Art by Karen Teramura. You don't have to be a professional astronomer, or even own a telescope, to participate in a myriad of astronomy research projects. These days, a computer and an Internet connection are all you need.

Anne’s Astronomy News November 30, 2012 SNR 0509-67.5, a supernova remnant in the LMC Image Credit: X-ray: NASA/CXC/SAO/J.Hughes et al, Optical: NASA/ESA/Hubble Heritage Team (STScI/AURA) SNR 0509-67.5 (SNR 0509 for short) is the remnant of a supernova explosion in the Large Magellanic Cloud, located some 160,000 light-years away in the constellation of Dorado. It is about 23 light-years across and expanding at more than 5,000 kilometers a second, or more than 18 million kilometers an hour. Sky Map Sky Map is a hand-held planetarium for your Android device. Use it to identify stars, planets, nebulae and more. Originally developed as Google Sky Map, it has now been donated and open sourced. Troubleshooting/FAQThe Map doesn't move/points in the wrong placeMake sure you haven't switched into manual mode.

Monster Black Hole Is the Largest and Brightest Ever Found Astronomers have discovered the largest and most luminous black hole ever seen — an ancient monster with a mass about 12 billion times that of the sun — that dates back to when the universe was less than 1 billion years old. It remains a mystery how black holes could have grown so huge in such a relatively brief time after the dawn of the universe, researchers say. Supermassive black holes are thought to lurk in the hearts of most, if not all, large galaxies. The largest black holes found so far in the nearby universe have masses more than 10 billion times that of the sun. In comparison, the black hole at the center of the Milky Way is thought to have a mass only 4 million to 5 million times that of the sun. [The Strangest Black Holes in the Universe]

Sun for All Project download poster The project “Sun for all”, funded by Ciência Viva (2005 117/ 18) aims to promote science in general and astronomy in particular, among students. The project rests on the asset of over 30000 Sun images (spectroheliograms) that are kept in the Astronomical Observatory of the University of Coimbra, as a result of a work of over 80 years of daily solar observations that started in 1926. NASA shake tests the Orion capsule that could take man to Mars The capsule, which could one day man to the red planet, has been put through its paces on the world's most powerful vibration table to simulate launch. Nasa has revealed the latest test to ensure its Orion capsule will be able to survive launching on top of the world's most powerful rocket. Engineers at NASA Glenn's Plum Brook Station in Sandusky, Ohio recently finished a series of tests on a full-size test version of Orion's service module to verify that it can withstand the vibrations it will experience when it launches and travels into space atop the Space Launch System (SLS) rocket. Scroll down for video The 13-ton service module is an essential part of the spacecraft.

Global Hands-On Universe: Software SalsaJ is free, student-friendly software developed specifically for the EU-HOU project. SalsaJ is designed to be easy to install and use. It allows students to display, analyse, and explore real astronomical images and other data in the same way that professional astronomers do, making the same kind of discoveries that lead to true excitement about science. A number of exercises have developed complete with data to download and detailed instructions for use. 'It's Snowing on Jupiter': Stunning Photos Show Clouds High in Gas Giant's Skies Error loading player: No playable sources found Not all of Jupiter's clouds are huge, swirling, otherworldly beasts. Spectacular new images captured by NASA's Jupiter-orbiting Juno spacecraft show fluffy-looking white clouds casting their comparably tiny shadows on the giant planet's monstrous, multicolored cloud decks. The white clouds, which get up to 50 miles (80 kilometers) wide or so, are high up in Jupiter's atmosphere — so high that they're very cold, and the material they shed is therefore almost certainly frozen, Juno team members said.

Antimatter I teach an introductory course in big bang cosmology at Waterford Institute of Technology in Ireland and this weblog will be mainly concerned with the universe and its puzzles (see Categories)…with occasional pieces on science and society, climate science, surfing, skiing and whatnot Cormac O’Rafferty ANTIMATTER: an exotic form of matter in which the electric charge of each particle is the opposite of that in normal matter. In pictures: Astronomy Photographer of the Year 2017 The winning images from this year's competition have now been announced, with Artem Mironov's vibrant clouds of dust and gas in the Rho Ophiuchi Cloud Complex scooping first place. Stars and Nebulae Mironov won both the Stars and Nebulae category and the overall award, Insight Astronomy Photographer of the Year 2017. This image was taken over the course of three nights at a farm in Namibia, near Gamsberg mountain. The nebula is approximately 400 light years away from our planet, yet it is one of the closest to the Solar System.