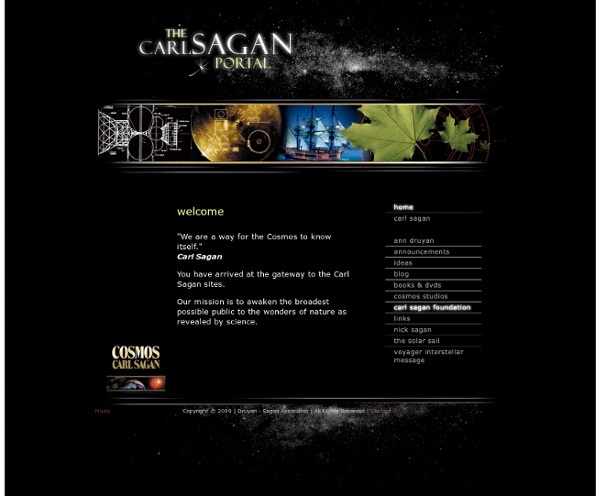 free university lectures - computer science, mathematics, physics, chemistry Whether your goal is to earn a promotion, graduate at the top of your class, or just accelerate your life, lectures can help get you there. Our archives of lectures cover a huge range of topics and have all been handpicked and carefully designed by experienced instructors throughout the world who are dedicated to helping you take the next step toward meeting your career goals. Lifelong learns can turn their free time turn into self-improvement time. The online lectures on this list are more than lecture notes or a slideshow on a topic -- they were designed for audiences like you, with carefully sequenced themes and topics taught by veteran educators, and often with additional resources for your own independent study. The lectures are available to anybody, completely free of charge. Lecture courses are a valid and vital learning tool, and may be one of the best methods of learning available.

Astronomy Picture of the Day Discover the cosmos! Each day a different image or photograph of our fascinating universe is featured, along with a brief explanation written by a professional astronomer. 2016 April 15 Graphene in space could hold clues to development of life on Earth An artist's concept of graphene, buckyballs and C70 superimposed on an image of the Helix planetary nebula (Image: IAC/NASA/NOAO/ESA/STScI/NRAO) Human beings may have only discovered how to create the one-atom-thick sheets of carbon atoms known as graphene in 2004 but it appears the universe could have been churning out the stuff since much earlier than that. While not conclusive proof its existence in space, NASA's Spitzer Space Telescope has identified the signature of graphene in two small galaxies outside our own. If confirmed, it would be the first-ever cosmic detection of the material and could hold clues to how carbon-based life forms such as ourselves developed.

Lindsey Caldwell « StyleLikeU I was drooling listening to Lindsey’s stories about her experience in Atlanta’s rich, underground music scene during the ’90s. She recalls what is now, sadly, an almost extinct phenomenon: sweaty nights of dancing at low-key clubs with ratty sofas, where people like Erykah Badu, Andre 3000, India Arie or Chilli might pop in and sing. Lindsey says, “Everyone wanted to know everyone… everything was a mix… it wasn’t pretentious.” For Lindsey, it was in this environment that she fell in love with drums and beats and rave and learned to be a skilled DJ, the kind with two turntables who knows how to blend songs and genres. In order to make her own imprint as a DJ, Lindsey moved to NYC with hundreds of vinyls in tow. It was while living on St.

Your Age on Other Worlds Want to melt those years away? Travel to an outer planet! <div class="js-required"><hr> This Page requires a Javascript capable browser <hr></div> Fill in your birthdate below in the space indicated. (Note you must enter the year as a 4-digit number!) Sciences A view of the Earth as seen by the Apollo 17 crew while traveling to the Moon on December 7, 1972. Africa, Madagascar, and the Arabian Peninsula are visible, and you can barely make out the Antarctic, shrouded in the heavy cloud cover in the southern hemisphere. Arching cloud patterns show the presence of weather fronts. Image courtesy of NASA/Apollo 17.

Hubble data predicts Milky Way galactic collision When Galaxies Collide! It sounds like an early science fiction novel. However, analysis of Hubble measurements shows that our own Milky Way galaxy is moving toward a head-on collision with our nearest neighbor, the Andromeda galaxy (also known as M31). Double eclipse: Moment Moon AND International Space Station cross face of Sun By Daily Mail Reporter Updated: 20:58 GMT, 5 January 2011 Britons were only offered a clouded view of yesterday's partial solar eclipse owing to our typically dreary weather. But one lucky skywatcher in south-west Asia managed to catch a doubly striking glimpse of the natural phenomenon. After some careful calculations, photographer Thierry Legault decided to travel to just outside Oman's capital city of Muscat, where he knew he could catch both the Moon and the International Space Station briefly crossing the Sun.

About » Flyer Inspiration - Design inspiration for club and music events What is Flyer Inspiration ? Flyer Inspiration is a showcase site for graphic designers creating promotional material for club and music industry events. The purpose of the site is to provide both an inspirational resource and showcase of work. We will also post links to useful resource sites for brushes, stock images and other things useful in a designers toolbox. For all the latest updates, links and info please follow us on Twitter. Advertisting Radio telescopes capture best-ever snapshot of black hole jets An international team, including NASA-funded researchers, using radio telescopes located throughout the Southern Hemisphere has produced the most detailed image of particle jets erupting from a supermassive black hole in a nearby galaxy. "These jets arise as infalling matter approaches the black hole, but we don't yet know the details of how they form and maintain themselves," said Cornelia Mueller, the study's lead author and a doctoral student at the University of Erlangen-Nuremberg in Germany. The new image shows a region less than 4.2 light-years across -- less than the distance between our sun and the nearest star. Radio-emitting features as small as 15 light-days can be seen, making this the highest-resolution view of galactic jets ever made. The study will appear in the June issue of Astronomy and Astrophysics and is available online. Mueller and her team targeted Centaurus A (Cen A), a nearby galaxy with a supermassive black hole weighing 55 million times the sun's mass.

Interactive Biology Interactive Biology Serendip sees the web as a tool which can make education a more interactive and exploratory process, by making freely available educational resources at a variety of levels and also, even more importantly, be making it increasingly possible to learn by doing (see Serendip's web principles and credo on education and technology). To encourage understanding and use of the web in this way, Serendip provides annotated lists of links useful for learning/teaching in a variety of areas (see Interactive Physics and Interactive Chemistry).