VERITAS detects gamma rays from galaxy halfway across the visible universe. In April 2015, after traveling for about half the age of the universe, a flood of powerful gamma rays from a distant galaxy slammed into Earth's atmosphere. 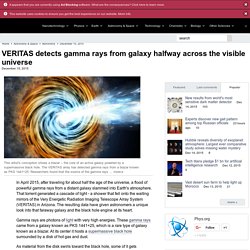 That torrent generated a cascade of light - a shower that fell onto the waiting mirrors of the Very Energetic Radiation Imaging Telescope Array System (VERITAS) in Arizona. The resulting data have given astronomers a unique look into that faraway galaxy and the black hole engine at its heart. Gamma rays are photons of light with very high energies. These gamma rays came from a galaxy known as PKS 1441+25, which is a rare type of galaxy known as a blazar. At its center it hosts a supermassive black hole surrounded by a disk of hot gas and dust. ALMA Sees Einstein Ring in Stunning Image of Lensed Galaxy - NRAO: Revealing the Hidden Universe. For release: 9 a.m. 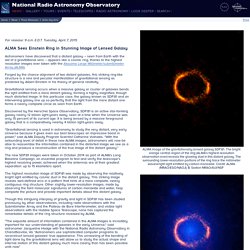 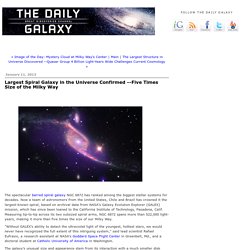 Now a team of astronomers from the United States, Chile and Brazil has crowned it the largest-known spiral, based on archival data from NASA's Galaxy Evolution Explorer (GALEX) mission, which has since been loaned to the California Institute of Technology, Pasadena, Calif. Measuring tip-to-tip across its two outsized spiral arms, NGC 6872 spans more than 522,000 light-years, making it more than five times the size of our Milky Way. A Spectacular Scene of Stellar Birth & Death. Arp 147 contains the remnant of a spiral galaxy (right) that collided with the ancient red elliptical galaxy on the left. 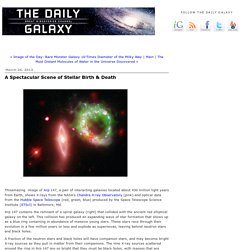 This collision has produced an expanding wave of star formation that shows up as a blue ring containing in abundance of massive young stars. These stars race through their evolution in a few million years or less and explode as supernovas, leaving behind neutron stars and black holes. A fraction of the neutron stars and black holes will have companion stars, and may become bright X-ray sources as they pull in matter from their companions. Andromeda's Supermassive Black Hole: "Mystery of the Rings of Ancient Red and New Blue Stars"

BORG Survey Finds Oldest Known Galaxy Cluster in Universe. Galaxy clusters are the largest structures in the Universe, comprising hundreds to thousands of galaxies bound together by gravity. 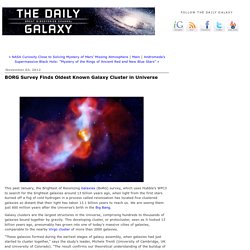 This developing cluster, or protocluster, seen as it looked 13 billion years ago, presumably has grown into one of today's massive cities of galaxies, comparable to the nearby of more than 2000 galaxies. "These galaxies formed during the earliest stages of galaxy assembly, when galaxies had just started to cluster together," says the study's leader, Michele Trenti (University of Cambridge, UK and University of Colorado). Remnant of a Dwarf Galaxy Devoured by the Milky Way. Astronomer Mary Williams, who is working with an international team in Germany on a million-star survey, found the "Aquarius Stream. 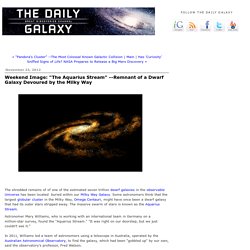 " "It was right on our doorstep, but we just couldn't see it. " Although models predicted that big galaxies such as the Milky Way were surrounded by dwarf galaxies, Prof Watson said astronomers rarely saw them. "Perhaps many of them have been eaten up by the big galaxies. So, we're looking at our Milky Way Galaxy to try to find little galaxies that it's swallowed. " Gigantic Disc of Dwarf Galaxies Discovered Orbiting Andromeda. A newly discovered form of circle dancing is perplexing astronomers; not due to its complex choreography, but because it's unclear why the dancers – dwarf galaxies – are dancing in a ring around the much larger Andromeda Galaxy. 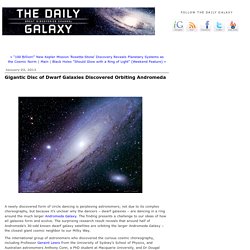 The finding presents a challenge to our ideas of how all galaxies form and evolve. The surprising research result reveals that around half of Andromeda's 30-odd known dwarf galaxy satellites are orbiting the larger Andromeda Galaxy – the closest giant cosmic neighbor to our Milky Way. "When we looked at the dwarf galaxies surrounding Andromeda, we expected to find them buzzing around randomly, like angry bees around a hive. "Instead, we've found that half of Andromeda's satellites are orbiting together in an immense plane, which is more than a million light years in diameter but only 30 000 light years thick. Our Solar System Is Surrounded by Supernovae Debris. Astronomers find the first sibling of the sun. Sen—A team of researchers has identified for the first time a star directly related to the Sun, one almost certainly born from the same cloud of gas and dust. 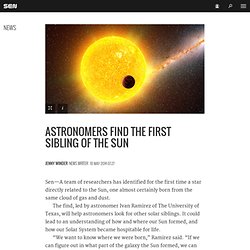 The find, led by astronomer Ivan Ramirez of The University of Texas, will help astronomers look for other solar siblings. It could lead to an understanding of how and where our Sun formed, and how our Solar System became hospitable for life. “We want to know where we were born,” Ramirez said. “If we can figure out in what part of the galaxy the Sun formed, we can constrain conditions on the early solar system. That could help us understand why we are here.” Additionally, there is a chance, “small, but not zero,” Ramirez said, that these solar siblings could host planets that harbour life.

“So it could be argued that solar siblings are key candidates in the search for extraterrestrial life,” Ramirez said. The star is not visible to the unaided eye but easily can be seen with low-power binoculars, not far from the bright star Vega. “The View From Mars: Part One: ALMA (Atacama Large Millimetre Array)” by Jonathan de Villiers - NOWNESS. Astronomers Discover that the Milky Way Wobbles. Velocity map of the extended solar neighborhood as seen by RAVE. 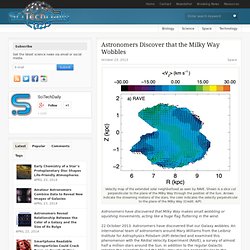 Shown is a slice cut perpendicular to the plane of the Milky Way through the position of the Sun. Arrows indicate the streaming motions of the stars, the color indicates the velocity perpendicular to the plane of the Milky Way (Credit: AIP). Astronomers have discovered that Milky Way makes small wobbling or squishing movements, acting like a huge flag fluttering in the wind. 22 October 2013. Astronomers have discovered that our Galaxy wobbles. It is common knowledge that our Galaxy is permanently in motion. I wonder if this could be do. “Red Nugget” Galaxies Were Hiding in Plain Sight. In 2005 the Hubble Space Telescope spotted unusually small galaxies densely packed with red stars in the distant, young universe. 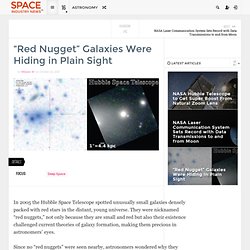 They were nicknamed “red nuggets,” not only because they are small and red but also their existence challenged current theories of galaxy formation, making them precious in astronomers’ eyes. Since no “red nuggets” were seen nearby, astronomers wondered why they had disappeared over time. New research shows that they didn’t disappear completely. In fact, they were simply hidden within the data of previous surveys. Astronomers now realize these newfound compact galaxies could represent a missing link between distant “red nuggets” and nearby elliptical galaxies.

To find them, astronomer Ivana Damjanov (Harvard-Smithsonian Center for Astrophysics) and her colleagues searched databases from the Sloan Digital Sky Survey. By sifting through the Sloan data, the team dug up more than 600 “red nugget” candidates.