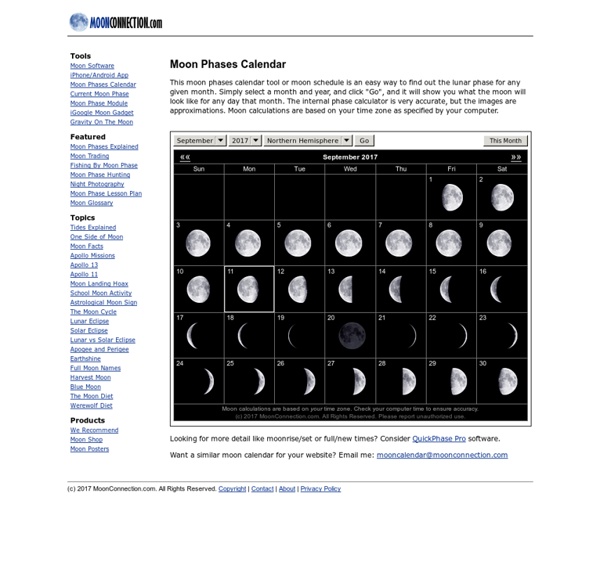 This moon phases calendar tool or moon schedule is an easy way to find out the lunar phase for any given month. Simply select a month and year, and click "Go", and it will show you what the moon will look like for any day that month. The internal phase calculator is very accurate, but the images are approximations. Moon calculations are based on your time zone as specified by your computer. Looking for more detail like moonrise/set or full/new times? Consider QuickPhase Pro software. Want a similar moon calendar for your website?

13 Moon Calendar Tutorial The coming new era on our planet has everything to do with a change of timing frequency. The 13 Moon-28-day calendar is a simple tool that helps us to raise our frequency and gives us a new lens to view both our day-to-day and planetary events. Because both the Gregorian and 13 Moon calendars operate with 52 seven-day weeks annually (364 days), the 13 Moon calendar provides a perfect daily transition tool for hooking back up with the higher-dimensional order! It is simple to follow day-to-day as it is marked with the dates of the Gregorian calendar.

Order Supple® LLC's SUPPLE® Drink For Supple Joints from Supple TV Show First Name* Last Name* Street Address 1* Lunar calendar A lunar calendar is a calendar that is based on cycles of the lunar phases. Because there are slightly more than twelve lunations (synodic months) in a solar year, the period of 12 lunar months (354.37 days) is sometimes referred to as a lunar year. A common purely lunar calendar is the Islamic calendar or Hijri Qamari calendar. A feature of the Islamic calendar is that a year is always 12 months, so the months are not linked with the seasons and drift each solar year by 11 to 12 days. It comes back to the position it had in relation to the solar year approximately every 33 Islamic years.

Shambhala Training Shambhala Training is a secular approach to meditation developed by Tibetan Buddhist teacher Chogyam Trungpa and his students.[1][2] It is based on what Trungpa calls Shambhala Vision, which sees enlightened society as not purely mythical, but as realizable by people of all faiths through practices of mindfulness/awareness, non-aggression, and sacred outlook.[3] He writes: The Shambhala Training teachings cover art, society, and politics and the goal of creating an enlightened society. That goal is presented as not solely a social and political process, but one requiring individuals to develop an awareness of the basic goodness and inherent dignity of themselves, of others, and of the everyday details of the world around them. This is facilitated by cultivating gentleness and bravery.[5]

10 Most Magnificent Trees in the World. "A tree is a wonderful living organism which gives shelter, food, warmth and protection to all living things. It even gives shade to those who wield an axe to cut it down" - Buddha. There are probably hundreds of majestic and magnificent trees in the world - of these, some are particularly special: Post-apocalyptic Tokyo scenery 19 Aug 2010 The illustrations of TokyoGenso (a.k.a. Tokyo Fantasy) depict a post-apocalyptic Tokyo devoid of people and overtaken by nature. The Top 10 Plants for Removing Indoor Toxins Common indoor plants may provide a valuable weapon in the fight against rising levels of indoor air pollution. NASA scientists are finding them to be surprisingly useful in absorbing potentially harmful gases and cleaning the air inside homes, indoor public spaces and office buildings. The indoor pollutants that affect health are formaldehyde, Volatile Organic Compounds (benzene and trichloroethylene or TCE), airborne biological pollutants, carbon monoxide and nitrogen oxides, pesticides and disinfectants (phenols), and radon. These pollutants contribute to ‘sick building syndrome’, which causes symptoms ranging from allergies, headaches and fatigue through to nervous-system disorders, cancer and death. Through studies conducted by NASA, scientists have identified 50 houseplants that remove many of the pollutants and gases mentioned above. Dr.