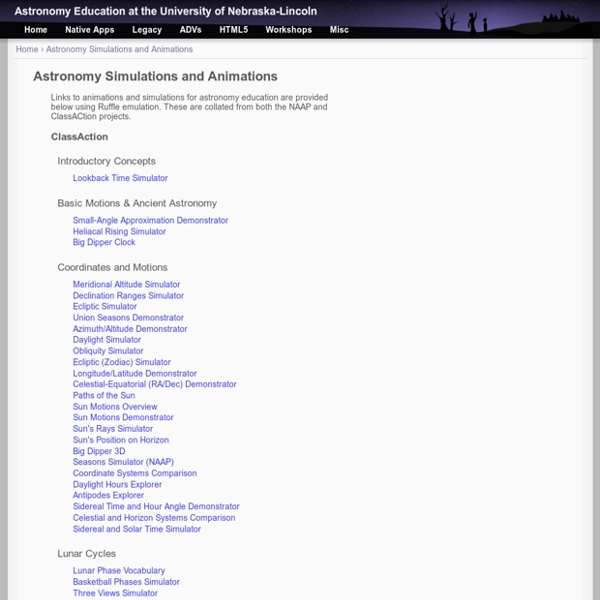 How to See the Best Meteor Showers of the Year A Geminid meteor. Image credit: Jimmy Westlake› Larger image December 31, 2011 Update: Friday Dec. 20, 2013 MSPhysics 0.9.5 (31 October 2016) MSPhysicsMSPhysics is a real-time physics simulation plugin for SketchUp, similar to SketchyPhysics. Unlike SketchyPhysics, MSPhsyics is a written completely from scratch, integrating the latest NewtonDynamics physics SDK. The differences between the two is that MSPhysics is a lot faster, has a far more advanced scripting API, and comes with a reliable Replay animation tool. Furthermore MSPhysics uses AMS Library, which on the Windows side, allows taking control over user input, such as mouse and keyboard, and switching SketchUp fullscreen. With such advantage, creating FPS type games in MSPhysics, without interference of various keyboard/mouse shortcuts, is now a possibility.

The Universe at Your Fingertips 2.0 DVD-ROM: AstroShop A Collection of Activities and Resources for Teaching Astronomy (on a DVD-ROM) Edited by Andrew FraknoiPublished by the Astronomical Society of the Pacific Wholesale and international orders please contact service {at} astrosociety.org or call customer service at 1-800-335-2624. This DVD-ROM is the most comprehensive resource and activity guide for teaching basic concepts and activities in space science ever published. It includes: Black Holes: Gravity's Relentless Pull Black holes are places where ordinary gravity has become so extreme that it overwhelms all other forces in the Universe. Once inside, nothing can escape a black hole's gravity — not even light. Yet we know that black holes exist. We know how they are born, where they occur, and why they exist in different sizes. We even know what would happen if you fell into one.

Executive Command Ever wanted to be President for a day? In Executive Command, you can be President for four years! Check out the game trailer HERE. Try to accomplish what you set as your agenda while facing the challenges and responsibilities that crop up along the way. Dark Side of the Earth 200 miles above Earth's surface, astronaut Dave Wolf -- rocketing through the blackness of Earth's shadow at 5 miles a second -- floated out of the Mir Space Station on his very first spacewalk. In this short, he describes the extremes of light and dark in space, relives a heart-pounding close call, and shares one of the most tranquil moments of his life. When we were putting together our live show In the Dark, Jad and Robert called up Dave Wolf to ask him if he had any stories about darkness. And boy, did he. Dave told us two stories that became the finale of our show. Back in late 1997, Dave Wolf was on his first spacewalk, to perform work on the Mir (the photo to the right was taken during that mission, courtesy of NASA.).

Magnetic Reversals What do we mean by a magnetic reversal or a magnetic 'flip' of the Earth? The Earth has a magnetic field, as can be seen by using a magnetic compass. It is mainly generated in the very hot molten core of the planet and has probably existed throughout most of the Earth's lifetime. The magnetic field is largely that of a dipole, by which we mean that it has one North pole and one South pole. At these places, a compass needle will point straight down, or up, respectively. It is often described as being similar in nature to the field of a bar (e.g. fridge) magnet. 3D Shapes . Polyhedron There are many types of three-dimensional shapes. You've surely seen spheres and cubes before. In this lesson, you'll learn about polyhedra — three-dimensional shapes whose faces are polygons — and you'll also learn about two special types of polyhedra: prisms and pyramids. Polyhedra

REBROADCAST: Space Celebrate the 35th anniversary of the launch of Voyager 2 (it rocketed off Earth on 8/20/77 carrying a copy of the Golden Record), and tip your hat to the Mars rover Curiosity as it kicks off its third week on the red planet, with a rebroadcast of one our favorite episodes: Space. We've been space-crazy the past few weeks here at Radiolab -- from cheering on the scientifically epic landing of the Mars rover earlier this month, to staying up late to watch the Perseid meteor showers, to reliving a stomach-churning spacewalk with an astronaut in our live show In the Dark. We've been happily turning our thoughts and gazes skyward all summer long. So before the nights get too chilly, grab a blanket, cue up Space, and stare into that vast, glittering, perspective-shaking darkness with us.

Night Sky: Visible Planets, Moon Phases & Events, May 2014 The night sky tonight and on any clear night offers an ever-changing display of fascinating objects you can see, from stars and constellations to bright planets, often the moon, and sometimes special events like meteor showers. Observing the night sky can be done with no special equipment, although a sky map can be very useful, and a good beginner telescope or binoculars will enhance some experiences and bring some otherwise invisible objects into view. You can also use astronomy accessories to make your observing easier. Below, find out what’s up in the night sky tonight (Planets Visible Now, Moon Phases, Observing Highlights This Month) plus other resources (Skywatching Terms, Night Sky Observing Tips and Further Reading). The night sky is more than just the moon and stars, if you know when and where to look.Credit: Karl Tate/SPACE.com