Current position of the ISS 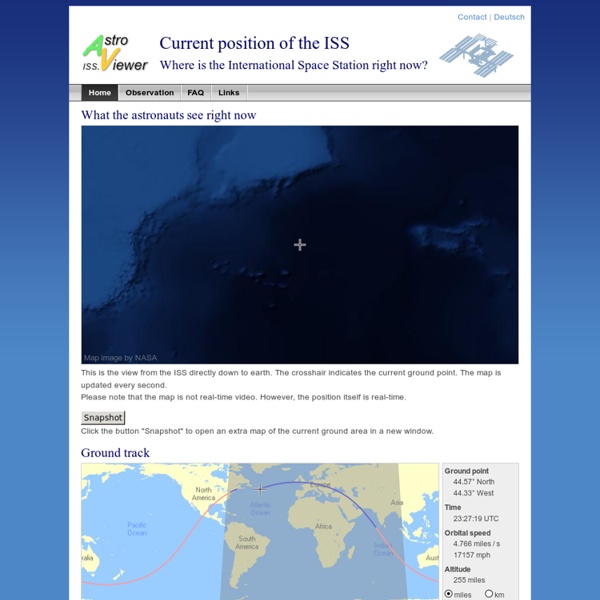 Incredible Space Pics from ISS by NASA astronaut Wheelock Go Discovery! It was October 23, 2007 at 11:40am EST when I had my first ride to space on Discovery. She’s beautiful… just sad that this will be her last voyage. Powered Paragliding Resources General | Services | Weather | Motors |Props | Wings | Accessories | Clinics | Repairs 2011-01-05 FlyMaster added in Accessories These are printed or other materials and internet links that can be useful to pilots and potential pilots. It will be updated as new items are added. The two images in the upper-right corner are sized to be screen savers for popular monitor sizes. Right click and select "save target as".

Interactives archive: Space Anatomy of the RingsImages sent back from Cassini are resolving age-old mysteries about Saturn's rings. Anatomy of a RoverExamine the robotic geologists and their scientific instruments. Asteroid That Hit L.A., TheA catastrophe calculator lets you try out some "what if" scenarios. Birth of a Black HoleIn this slide show, see how a dying star is reborn as a black hole. Birth of a SupernovaWhat exactly happens in a supernova explosion? See step-by-step the sequence of events that unfold during Type Ia and Type II supernovae.

18+ Pics Of Fairy Tale Architecture From Norway When you think of Norway, couple of things that come to mind are fjords, blonde people and vikings…probably not fairy tale architecture. Below, you’ll discover photographs of Norwegian architecture in the countryside that appears like it was taken straight from a fairy tale. The architectural styles range from Stave churches, which were built during the Middle Ages, to ghostly natural waterfalls and traditional wooden houses constructed in the Norwegian vernacular style (byggeskikk) during the 19th century. Tell us which of photos you think wouldn’t be perfectly placed within a fairy tale, and as always, feel free to submit your own photos of Norway. #1 Bridge Over Låtefossen Waterfall #2 Borgund Stave Church

The History of the Universe in 200 Words or Less Quantum fluctuation. Inflation. Expansion. Strong nuclear interaction. Particle-antiparticle annihilation. Giz Wiz Biz - Daily Giz Wiz Gadgets National Geographic Text by Dan VerganoIllustrations by Vincent Diga In the late summer and early fall of 1977, twin spacecraft called Voyager 1 and Voyager 2 sailed into space, bound for the far reaches of the planets. Like the ancient mariners, they would navigate a vast ocean, the solar system, in a pathbreaking bid to explore the mysterious outer planets. They carried star sensors and plutonium batteries, new to exploration, that suddenly opened space's outer precincts to human inquiry. Their navigators sat in a faraway place, the Jet Propulsion Laboratory (JPL) in Pasadena, California, where they sent piecemeal instructions to the spacecraft's steering computers. That year, Jimmy Carter was in the White House.

Compare Mexico To France With its 66,259,012 people, France is the 21st largest country in the world by population. It is the 43rd largest country in the world by area with 643,801 square kilometers. France today is one of the most modern countries in the world and is a leader among European nations. It plays an influential global role as a permanent member of the United Nations Security Council, NATO, the G-8, the G-20, the EU and other multilateral organizations. France rejoined NATO's integrated military command structure in 2009, reversing DE GAULLE's 1966 decision to take French forces out of NATO. Since 1958, it has constructed a hybrid presidential-parliamentary governing system resistant to the instabilities experienced in earlier, more purely parliamentary administrations. StereoMan » Hubble photos 4/26/2010 M64 “Black Eye” Galaxy click the picture 17 million light-years from Earth lies Messier 64, otherwise known as the Black Eye Galaxy, or Sleeping Beauty. Discovered in 1779 by Edward Pigott, astronomers thought for centuries that it was a fairly ordinary spiral galaxy. But recent observations, including those of the Hubble telescope, have revealed something truly extraordinary about M64. While it is true that all of the stars are rotating in the same direction, it appears that the gases in the outer regions of the galaxy are going the other way!

IowaPPG.com - The Midwest powered paragliding experts. The Making of a Mind-Blowing Space Photo One late night in 2007, Rogelio Bernal Andreo and his wife were driving down Highway 1 along California’s Lost Coast, when his wife opened the moon roof. What spread out above them looked nothing like the mauve sky near their Sunnyvale home. “It was like the Milky Way was in front of us,” said Andreo, a former early eBay employee, who runs a Spanish-language internet company. 5 Time Travel Conspiracies Time travel has always been a fascinating topic and has led to the birth of many conspiracies. Are these stories mere urban legend or is there some truth behind the seemingly impossible events described? While no clear evidence for time travel exists, there have been some strange events that might make you question whether it's possible, and it's true that governments are great at covering up what really takes place—both in this timeline and probably others... 5 Andrew Carlssin

The Rosette Nebula A Beginner's Guide to DSLR Astrophotography This book on CD-ROM for beginning astrophotographers explains how to take beautiful images with your digital single lens reflex (DSLR) camera using simple step-by-step techniques that anyone can learn. You will see how easy it is to take great pictures with very modest equipment and basic methods that are within everyone's ability. With this book you will learn how to take amazing images of the night sky with your DSLR camera. Get Started in DSLR Astrophotography Today! Click here to learn more about the book or to order it now!

Dark alien planet discovered by NASA An alien world blacker than coal, the darkest planet known, has been discovered in the galaxy. The world in question is a giant the size of Jupiter known as TrES-2b. NASA's Kepler spacecraft detected it lurking around the yellow sun-like star GSC 03549-02811 some 750 lightyears away in the direction of the constellation Draco. The researchers found this gas giant reflects less than 1 percent of the sunlight falling on it, making it darker than any planet or moon seen up to now. [The Strangest Alien Planets]