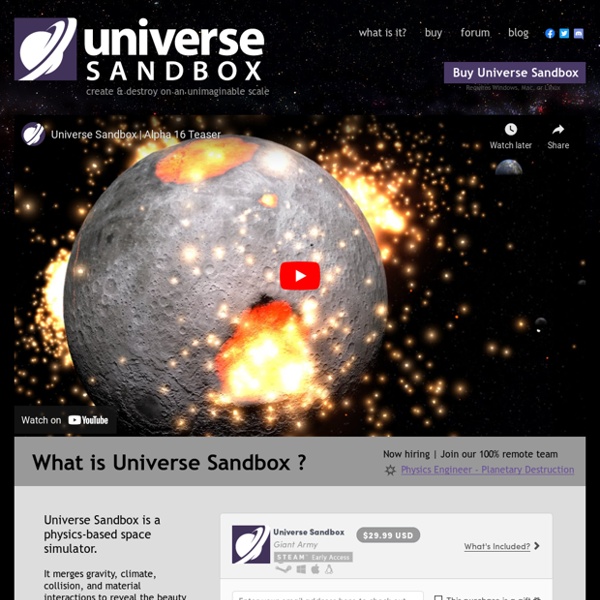 No One Wants to Live in My 'Elysium'-Style Simulation Orbital Space Colony They will also be a pain in the ass to run. And I speak from experience on this because I briefly governed my own orbital colony. My time in command did not end well. Hubble data predicts Milky Way galactic collision When Galaxies Collide! It sounds like an early science fiction novel. However, analysis of Hubble measurements shows that our own Milky Way galaxy is moving toward a head-on collision with our nearest neighbor, the Andromeda galaxy (also known as M31). The collision will start in about four billion years, and over the following three billion years the two spiral galaxies will coalesce into a large elliptical galaxy. General Astronomy Astronomy is the scientific study of the universe as a whole, and of celestial bodies and the underlying physics governing these bodies. It is in some sense one of the oldest of the natural sciences, having been practiced by even very ancient civilizations, but it is also among the most modernized of the sciences, having extensively exploited both advances in technology and the rise of space exploration. The progress of technology has dramatically improved our understanding of the universe, revealing a richer tapestry than had ever been imagined before.

Edge of Space Found Hold on to your hats, or in this case, your helmets: Scientists have finally pinpointed the so-called edge of space ? the boundary between Earth's atmosphere and outer space. With data from a new instrument developed by scientists at the University of Calgary, scientists confirmed that space begins 73 miles (118 kilometers) above Earth's surface. A lot remains very fuzzy, however, as the boundary is surrounded by a host of misconceptions and confusing, conflicting definitions. For starters, astronauts can say they've been to space after only passing the 50-mile (80-kilometer) mark.

A hidden population of exotic neutron stars Magnetars — the dense remains of dead stars that erupt sporadically with bursts of high-energy radiation — are some of the most extreme objects known in the universe. A major campaign using NASA’s Chandra X-ray Observatory and several other satellites shows magnetars may be more diverse — and common — than previously thought. When a massive star runs out of fuel, its core collapses to form a neutron star, an ultradense object about 10 to 15 miles (16 to 24 kilometers) wide. The gravitational energy released in this process blows the outer layers away in a supernova explosion and leaves the neutron star behind.

Hubble Wallpaper Videos See the universe come to life via animations, scientific visualizations, expert commentary, and more. Ned Wright's Cosmology Tutorial News of the UniverseFrequently Asked QuestionsEnter the tutorial or the Italian version or the French version Cosmological fads and fallacies CMB SpectrumCMB AnisotropyBig Bang NucleosynthesisSupernova ObservationsCosmology, Religion & KansasSend me your comments New on the tutorial: A discussion of the history of the CMB dipole discovery. A history of COBE, the COsmic Background Explorer, in pictures. Scientists may have found a solution for space pollution When someone says, “This is where the laser cannon comes in,” that person is usually either joking or plotting to take over the world. But in a surprising turn of events, Discover Magazine editor Corey S. Powell wrote that on his blog yesterday and was neither joking nor (as far as we know) plotting to take over the world. The laser in question is the brain child of a group of Japanese researchers, and it would basically be the world’s most badass trash collector. And by trash, I mean space junk, which, as Powell explains, is becoming a pretty big problem:

Apollo 11-17 First man on the Moon - Apollo Moon Landings - QTVR photos from panoramas.dk Less known is that during all the missions they made image sequences which with today's computer technics can be stitched together into 360o interactive panoramas giving you the possibility to view the moon almost as you were there. Many of these panoramas have been published before but in low resolution and displayed in small sizes. Film used on the Moon was a modified Kodak Ectachrome 160.